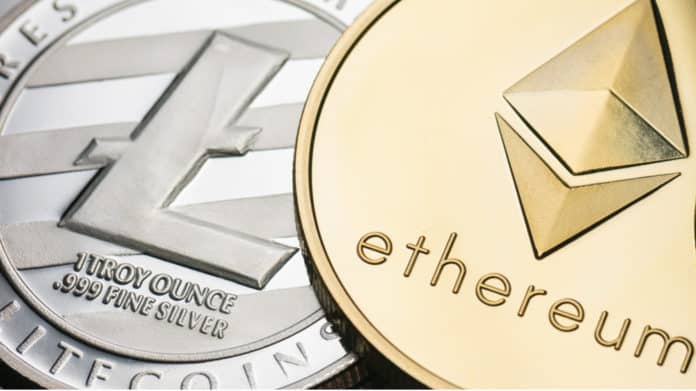 If you have been following the latest altcoin news, you probably know that Ethereum and Litecoin are among the biggest and most popular altcoins in the cryptocurrency space.

Contents hide
1 Litecoin And Ethereum: What Does Each Altcoin Represent?
1.1 What Is Ethereum (ETH)?
1.2 Related Articles:
1.3 What Is Litecoin (LTC)?
2 The 5 Key Differences Between Litecoin and Ethereum
3 Final Words

However, there are many questions which are unanswered and unknown for people trading both Litecoin and Ethereum. In today’s guide, we are unveiling all of the differences and comparing both of the altcoins – side by side.

Litecoin And Ethereum: What Does Each Altcoin Represent?

In 2019, the latest cryptocurrency news are showing a new bullish run recorded by most of the cryptocurrencies. It all started with the rise of Bitcoin, which also triggered altcoins to move in a positive direction.

Litecoin and Ethereum both recorded a positive growth this year.

What Is Ethereum (ETH)?

Basically, Ethereum is a public blockchain which allows developers to create decentralized applications (known as dApps) on it. Just like the Bitcoin blockchain, Ethereum has its own native currency called Ether (ETH). For now, the Ethereum network is secured using a PoW (Proof-of-Work) protocol which requires computers to solve complicated math problems. Ether can be used as a tradable currency and as a method to pay for things.

What Is Litecoin (LTC)?

Litecoin is very different to Ethereum. It has much more in common with Bitcoin than Ethereum does. Basically, it is a cryptocurrency in its truest sense. Unlike the software platform which backs Ethereum, Litecoin is a peer-to-peer software which is completely open source. In other words, the cryptocurrency uses a software which everyone can download, join the network and mine Litecoin. In that sense, Litecoin (LTC) is easier to understand.

The 5 Key Differences Between Litecoin and Ethereum

Because both cryptocurrencies are different in their nature, it is important to understand how they differ from each other. These are the key differences between Litecoin and Ethereum as explained in the alt coin news:

As you can see from above, Litecoin and Ethereum might look similar – but they are actually very different. Still, deciding on which coin to invest in best depends on your answer to the question “What do I want to do with this cryptocurrency?”

So, if you only want to conduct transactions, Litecoin (LTC) has affordable transaction fees. But if you want to create contracts, crowdsource and streamline management functions, the better technical alternative is Ethereum (ETH).

Will Lisk Become a Top 5 Cryptocurrency?