The Safe-T Mini is the first and only hardware wallet model created by the French technology company Archos, which is better known for manufacturing tablets, smartphones, and even electric personal vehicles. Archos was the first company to develop a collaborative network dedicated to IoT devices in 2016 and has now set its sights on the blockchain space.

Archos announced the Safe-T Mini hardware wallet in January 2018, at the height of the last crypto bull market, and the device was released for sale in June later that year.

Similar to their hardware wallet competitor, Ledger, Archos Safe-T mini’s are developed and built in France, which Archos claim is necessary “to ensure the process traceability” of these high-security products. So, has Archos, a company renowned for tech innovation, cracked the formula for the perfect cryptocurrency hardware wallet, or is it outstripped by its competitors whose sole focus is in cryptographic security?

Blokt finds out in this Archos Safe-T Mini review.

Here are the Archos Safe-T Mini specs at a glance:

The Safe-T Mini gives a good first impression during the unboxing experience, with packaging which slides open from the center to reveal the hardware wallet underneath. On the outer packaging, there are tamper-evident stickers to ensure the device hasn’t been modified in transit, although these aren’t secure holo-stickers like some of its competitors use.

Archos have bucked the trend with the Safe-T Mini hardware wallet, choosing a circular shape which fits nicely in hand, and comes with a small nylon protective bag, a short lanyard, micro-USB cable, and not one, but three seed phrase cards. As users will notice straight away, it’s one of the lightest and most compact wallets on the market.

Weighing in at just 12 grams, almost a third of the weight of the Ledger Nano X, users could easily carry the Archos Safe-T Mini in their pocket daily and forget it’s there. For those who are interested in the Ledger Nano X, we put together this in-depth Ledger Nano X review which highlights all its features and functions.

Other than the Safe-T Mini’s circular body, it doesn’t stand out as a particularly striking product, and the navigation buttons are quite large and cumbersome for the size of the device. Likewise, the OLED display has limited functionality, and users have to perform many storage processes via their computer, rather than the device itself. Otherwise, the Safe-T Mini feels like it’s got excellent build quality, and proudly displays ‘made in France’ on the back of the device.

Get the Archos Safe-T Mini 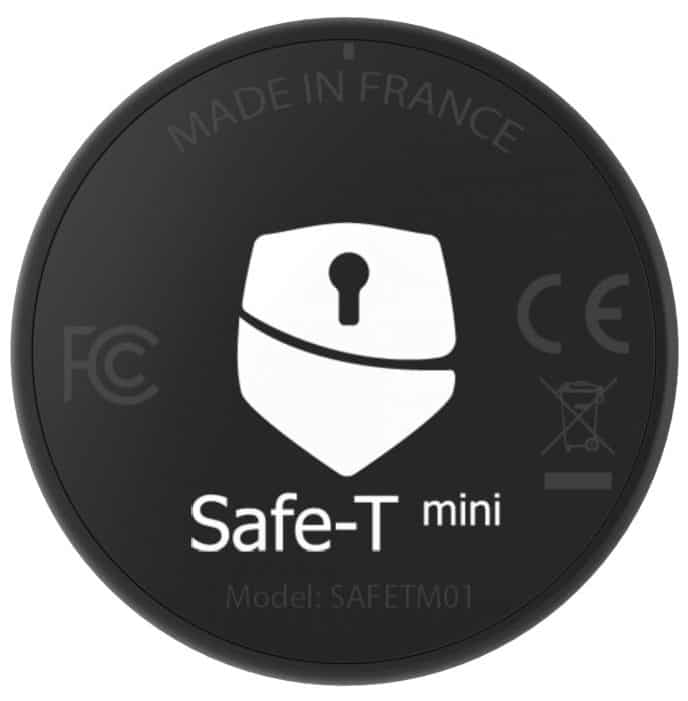 Arguably, the Safe-T Mini falls short when it comes to crypto asset support.
While Archos state that its coin support covers 75% of all crypto assets, it’s still a far lower number than the leading hardware wallets, and more importantly, Archos misses out support for some of the leading top 10 market cap coins for the Safe-T Mini.

Unlike Ledger’s devices, which support over 1,000 cryptocurrencies including Ripple, Cardano, Tron, and Stellar Lumens to name a few, the Archos Safe-T Mini supports just 7 major cryptos, alongside all ERC-20 tokens.

In addition to tokens on Ethereum, the Safe-T Mini provides support for:

The main security features of the Archos Safe-T Mini are:


Some users have nonetheless expressed concern that as Archos is a relative newcomer to the blockchain space, that the robustness of its security currently remains unproven.
Get Archos Safe-T Mini

Safe-T Mini Set-up and First-time Use

Set-up of the Safe-T mini device is fairly simple. Users can connect to a computer or mobile phone using the micro USB provided. Archos have developed a plug-and-play solution which takes users very little time to get started with their device.

Desktop users will need to download the Archos Safe-T Bridge Software, which makes it possible to link the device to your computer. After users have downloaded the Safe-T Bridge, they can simply plug the Safe-T Mini into their computer, and follow the steps to use their device.

At this point, users will be prompted to create a PIN for their device and make a note of their seed phrase for wallet recovery.

Archos uses a 24-word seed phrase for wallet recovery, unlike many wallets which use just 12, so be prepared that this stage will take a while to confirm that the seed phrase has been noted down correctly.

The Safe-T bridge also lets users update the firmware of their device, to ensure the Safe-T Mini is using the latest security protocols.

There are tradeoffs with any device, but here’s are some of the best and worst features of the Safe-T Mini:

We’ve reviewed the features of the Safe-T Mini device, and now you’re probably wondering, should you purchase an Archos Safe-T Mini hardware wallet?

Firstly, the most attractive aspect of the Safe-T Mini is its affordability. At just $59.99, it’s one of the most inexpensive hardware wallets on the market, and this factor alone makes it a great choice for the beginner or intermediate users who simply want a hardware wallet which supports Bitcoin or Ethereum private keys.

Note: For your convenience, we have also compiled a list of the best Ethereum wallets.

As a first foray into the blockchain and crypto space, the Safe-T Mini from Archos is a decent device with all the standard features you’d expect from a hardware wallet. However, users considering purchasing a Safe-T Mini should keep in mind that as a newcomer to the hardware wallet space, Archos’ device remains non-battle tested.

The Safe-T Mini is somewhat on the basic side, and despite its novel circular design, it doesn’t have the same luxury visual features of the KeepKey or Ledger Nano X devices. The fact that its ultra-lightweight might attract some users, but other than the KeepKey wallet, most hardware wallets are negligible in weight anyway.

It’s important to remember that Archos doesn’t just make hardware wallets, unlike Ledger or Trezor, so as a break-out product in a new market, the Safe-T Mini is a strong proof of concept for Archos’ future crypto devices.

Overall, the Archos Safe-T Mini is a good beginners hardware wallet, which is fairly simple to use and offers decent security for supported cryptographic assets.

But, if you’re after something a little more technical, you may want to consider buying ARCHOS’ latest crypto hardware wallet, the SafeT Touch.

Unveiled in September 2019, the SafeT Touch is similar to the Ledger Blue device in that it features a large smartphone-like touchscreen, with apps for each crypto you’ve added to your device.

Starting from €129, the ARCHOS SafeT Touch lets users check their balances without connecting physically to a computer, and it’s also possible to perform atomic swaps of coins directly from the device without going through a third-party exchange.

You can also make transactions from the SafeT Touch, which gives it a little more utility than the SafeT Mini – but it is a good deal more expensive.

Get the Archos Safe-T Mini

Expert Take
"As a first foray into the blockchain and crypto space, the Safe-T Mini from Archos is a decent device with all the standard features you’d expect from a hardware wallet."
Elliot Hill, Blokt

Pick up a Safe-T Mini