While some investors focus on the monetary value of Bitcoin and other cryptocurrencies, futurists, industrial leaders, and business people are looking beyond the ability of blockchain-based tokens to be used as a unit of exchange. Those leaders may be interested in Bitcoin as a disruptive currency, but it is the disruptive nature of the blockchain itself that has their attention. 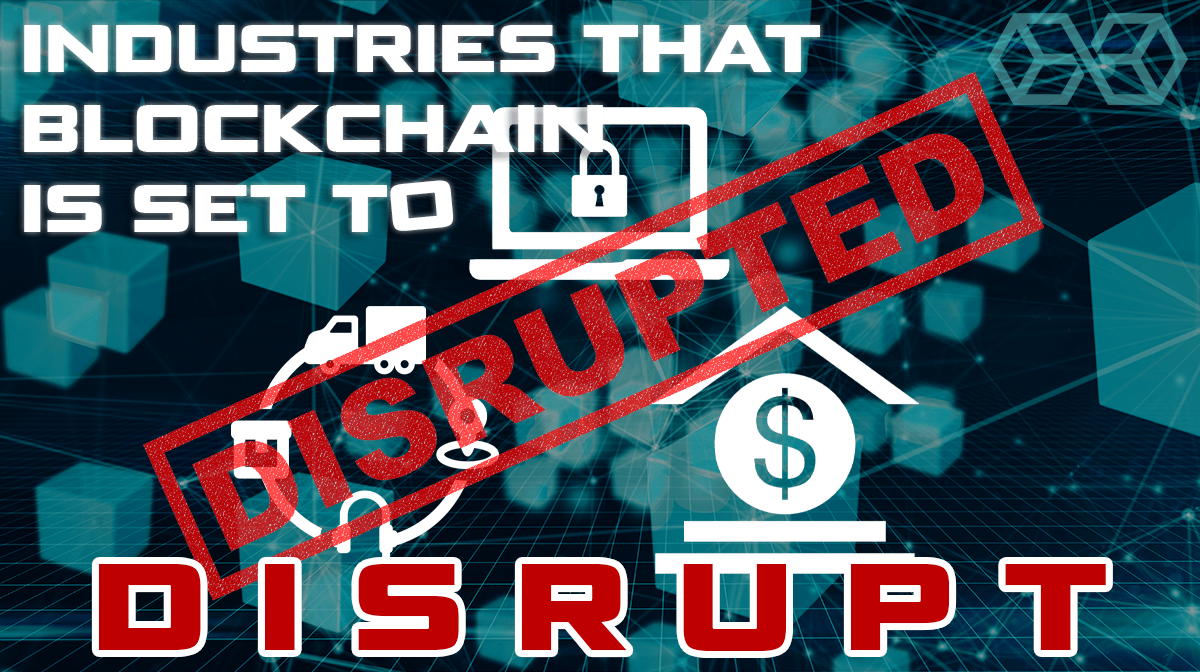 Blockchain technology and the wider concept of distributed ledgers are the things which underpin not only Bitcoin but most other popular cryptocurrencies like Ethereum and Litecoin. It is a blockchain that provides the security, the anonymity, and the integrity of those cryptocurrency transactions – and it is a blockchain that could ultimately change the face of business and government in the 21st century.

It is easy to see why blockchain would have a disruptive impact on banking and finance. After all, blockchain-based cryptocurrencies like Bitcoin are already changing the way consumers buy products and the way individuals and companies invest.

By providing consumers with a new way to pay for goods and services, the blockchain concept could ultimately make the traditional banking system irrelevant, or at least remove some of its current power. This change will not happen overnight, but there is a reason to think that it will occur.

Blockchain is also likely to disrupt payment systems that work across borders, including giants like Western Union. These cross-border payment systems currently have a virtual stranglehold on these types of transactions, and as a result, they can charge high fees for their services.

Blockchain-based transactions are already loosening that stranglehold and eating into the market share of firms like Western Union. Since Bitcoin can be converted to virtually any currency, residents of countries around the world can send money back and forth without high fees and hassle. Just as importantly, users can remain private and free from censorship, further disrupting the old-school financial industry.

Ripple is one of blockchains’ biggest success stories and a great example of how blockchain is being implemented in the real world. A real-time gross settlement system, Ripple is working with a number of major banking providers to provide fast and cheap international and cross border payments.

Created by Ripple Labs in 2012, Ripple’s open-source blockchain layer allows enterprise users to represent and transact virtually any unit of exchange on the blockchain, from frequent flyer miles to commodities, and allows these assets to be shared easily.

Ripple’s native currency, XRP, is used for fees within the wider Ripple ecosystem. At the time of writing, XRP is the third-largest cryptocurrency by market capitalization, with a huge US$13 billion valuation.

The technology Ripple is developing represents one of the best chances at low-cost international remittance for a whole host of industries, vastly increasing the potential for worldwide trade by making transactions of virtually any asset cheaper, faster, and safer.

The cybersecurity industry is vitally important to the future of business around the world. Significant hacking events like the one that happened at Equifax have reinforced the importance of robust cybersecurity – and the fact that current security methods are wholly inadequate.

Blockchain could have wide-reaching effects across many aspects of cybersecurity, including storage, securing internet of things (IoT) devices, improving the domain name system (DNS), and making messaging channels encrypted and secure.

For example, DNS hacks are commonplace on the web, where malicious parties seek to bring down a website or re-route its users to a copycat website designed to phish information from unsuspecting victims.

At present, DNS information is contained in a centralized manner, usually by domain registrars and hosting providers – serving as a single point of failure for websites. With blockchain, domain information could be stored on a distributed ledger, which by virtue of its design is much harder to exploit.

Similarly, although many messaging services claim to be encrypted, they are still administrated by a single entity or hosted from a centralized location. As such, user data is vulnerable, and also users must trust that the operator is acting in their best interests.

Instead, with decentralized messaging services, no central authority controls messages, and no one could access your encrypted messages without your authorization.

The blockchain concept could ultimately solve these cybersecurity problems and turn the business world on its head. The blockchain ledger is both public and transparent, giving it a significant advantage over other forms of payment. At the same time, the data contained in that public ledger is encrypted and verified through the use of advanced cryptography.

This cryptographic verification provides another level of security, one that could change the world of cybersecurity forever.

Managing the supply chain has always been a challenge for manufacturers, and it can be a costly one as well. Having too much stock on hand increases carrying costs and drives up the price of the finished product. Having too little inventory increases wait times and leads to customer dissatisfaction and other problems.

The use of blockchain technology could ultimately disrupt supply chain management and change things for the better. The distributed nature of a blockchain ledger could be used to verify the status and authenticity of products throughout the pipeline.

Through the use of blockchain technology, manufacturers could easily track their products from the loading dock to the warehouse to the retail store and ultimately to the homes of the customers that buy the goods.

The disruptive nature of the blockchain concept is hard to overstate, and this still young technology is already making waves and changing the world of business. In the future, you can expect further changes to the business world, all courtesy of the blockchain that makes Bitcoin and other cryptocurrencies possible.

Ambrosus, established in 2017, is an ecosystem that combines blockchain and IoT technology. With offices in Switzerland, Estonia, Belize, and Ireland, Ambrosus is a testament to the success of traditional business meeting blockchain technology.

An open-source project, Ambrosus allows physical assets to be managed and tracked via blockchain technology, greatly enhancing industrial processes in the real world.

Is Blockchain the Operating Infrastructure of All Future Industry?

Blockchain maximalists will tell you that distributed ledger technology is a cure-all for a whole range of industry ills. While it’s of little dispute that blockchain holds enormous disruptive potential across a range of industries, it’s best to take a measured approach when assessing blockchains wider importance.

As a technology, blockchain is still very much a nascent industry. We may be past the days of wild market speculation and volatility, but there’s a long way to go in convincing industry leaders that blockchain can revolutionize their business processes.

However, the applications we’ve discussed above are certainly some of the most promising avenues of blockchain adoption, which could create a huge marketplace for real-world applications of this exciting new technology.