While Bitcoin is “legal,” the truth is that in most places in the world, Bitcoin and other cryptocurrencies exist in a sort of “grey area.” Cryptocurrencies are such a new technology that most governments haven’t had a chance to understand what they are, let alone how to regulate them appropriately. 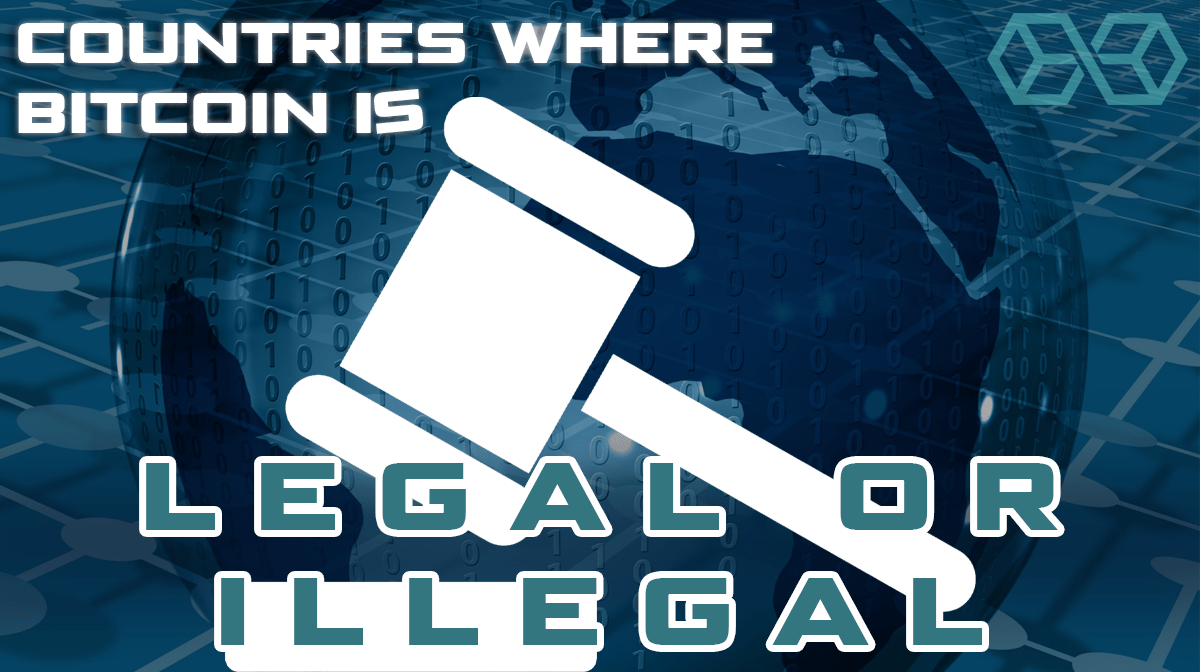 However, there are a few places that we can say for sure are crypto-unfriendly.  Currently, the countries that have been the most hostile toward crypto and Bitcoin (China and Russia, for example) seem to be the same countries that are quick and thorough with internet censorship and the general banning of anything that could support some “proletarian” revolution or unrest.

Countries in South America, Africa, and parts of Asia have seen a recent uptick in the use of Bitcoin and other kinds of cryptocurrency as a digital asset and as a method of international money transfer.  For some underbanked regions of these continents, mobile cryptocurrency wallets act as a method of storing and investing money that was previously unavailable to inhabitants of these areas, simply because of the lack of infrastructure.

The United States, Australia, Canada, and the European Union seem to be taking a more balanced approach toward regulating Bitcoin and cryptocurrency in general. Cryptocurrency is certainly not illegal in any of these places, and it is unlikely to be; however, there are not very many (if any) laws that are specifically designed to protect cryptocurrency users.

These five entities appear to have an understanding that cryptocurrency cannot be banned or stopped, and that it should ultimately be legitimized and integrated into existing financial systems.

All of that being said, the attitude regarding cryptocurrency does vary from country to country or state to state.  To check the legal status of Bitcoin and cryptocurrency in your country, click here.

Should Cryptocurrency Be Regulated?

Many of the early adopters and investors of Bitcoin and cryptocurrency were so-called “anarcho-capitalists” who were drawn to the idea of a blockchain-based currency because of the pathway it provided away from big banks, government institutions, and credit card companies.

These people argued (and argue) that cryptocurrency should not (and can not) be regulated because of its nature as a decentralized, anonymous platform for transacting and investing.

However, there are some benefits associated with the push to regulate Bitcoin and other kinds of cryptocurrency.  For one thing, crypto traders and investors may be safer under regulatory measures, and more likely to be legally entitled to some remuneration should an ICO or exchange be hacked.

The other result of cryptocurrency regulation is that more users, investors, and traders are more likely to join the party once regulations have been put in place. For many, regulating cryptocurrency is the thing that legitimizes it as an asset or means-of-payment.

In a sense, this is a case when “what’s good for one is what’s good for all”; the more people that use crypto, the higher its value as an asset. For example, Japan’s Virtual Currency Act, which was passed in 2017, is often cited as the most significant attributing factor to the astronomical rise in the value of Bitcoin and Ethereum.

Crypto industry heads in countries like India recognize the positive aspects of crypto legislation that make regulation so appealing.  A draft of crypto-related laws is currently being passed through the Indian legal system.

Even before the Indian government began the process of legislating crypto, however, Indian crypto industry leaders independently formed DABFI (the Digital Asset and Blockchain Foundation of India), which acted as an independent cryptocurrency regulatory committee.

There has been a recent push in some eastern countries to crack down hard on all things crypto.  At the beginning of September, China announced a sudden ban on ICOs; within weeks, the ban had expanded.  All domestic Chinese cryptocurrency exchanges were demanded to close down all operations.  While rumors are circulating that China may lift the ban, the legal drama is likely to continue (at least for a while).

A similar ban was announced in South Korea at the end of September 2017 when the South Korean financial regulator said that “stern penalties” would be allocated to companies issuing ICOs.

Russia has also been sending a lot of mixed messages about its stance on cryptocurrency; it seems that the Russian government is either for or against it depending on the weather and the time of day.  However, it does seem that the government is leaning towards tighter regulations on crypto trading for “ordinary people.”  Meanwhile, the Russian government has unveiled the so-called “CryptoRuble,” which will be Russia’s national cryptocurrency.

Where Is Bitcoin Illegal?

We’ve explored crypto-friendly jurisdictions, and also those where Bitcoin is frowned upon or treated with caution. In these nations, crypto is not accepted as legal tender, but the general consensus is that if an individual chooses to own Bitcoin, that risk is up to them. However, are there are countries where Bitcoin is completely banned?

The short answer is yes. In a number of South American countries, governments have taken a harsh stance on Bitcoin. For example, the El Banco Central de Bolivia, the Bolivian national bank, has completely banned Bitcoin, including being held as an investment.

Similarly, Ecuador’s national assembly voted to ban Bitcoin and all other cryptocurrencies; and Colombia likewise does not allow its citizens to invest in Bitcoin or other digital assets.

In other continents, some North African nations have sought to ban Bitcoin completely. Specifically, some Arabic countries take a particularly hard stance on digital currencies.

Algeria published guidance in December 2017, which stated that purchasing or using virtual currencies was punishable by law. Likewise, Morocco also notified its citizens in 2017 that Bitcoin was unlawful, but has since called for frameworks to be put in place for its safe implementation.

This reaction may be because certain investments must be considered acceptable by Islamic Law, on which the jury is still undecided for Bitcoin and cryptocurrencies. This is certainly the stance in Egypt, who have banned Bitcoin under a religious decree which classifies the digital asset as Haram – prohibited under Islamic law.

It’s interesting that many of the countries which have outlawed or discouraged the use of Bitcoin have had a history of fairly unstable fiat currencies or economic situations themselves. This has led many to speculate that these nations do not want to lose control over their monetary systems.

In practice, as Bitcoin is pseudo-anonymous, it would be incredibly hard to identify or police individuals who held BTC in jurisdictions where it was banned.

What do you think the legal future of cryptocurrency will be?  Should it be regulated and legitimized?  Should it be banned?  Should the governments of the world keep their hands off?  We would love to hear what you think.

Getting started as an investor, trader, or user in the world of cryptocurrency can be an intimidating process.  For more helpful guides regarding the legality and usage of Bitcoin and other kinds of cryptocurrency, head over to our guides section. Useful content is being added all the time, and we would love to have you as part of our community.