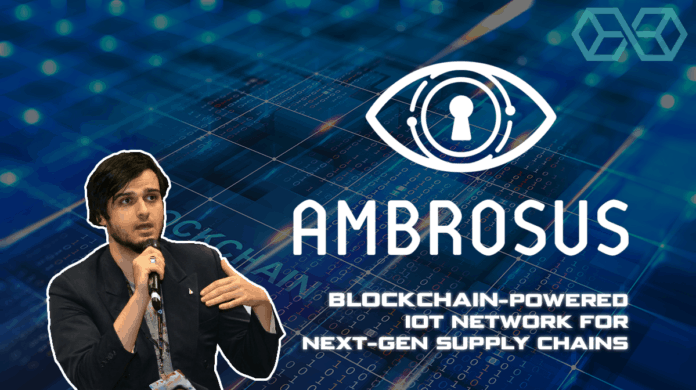 The internet of things (IoT) is often hailed as a revolution in the way smart objects connect with each other. More recently, technologists have imagined the emergence of smart cities, hyper-connected urban landscapes where multiple sensors communicate with each other; or supply chain tracking executed with ease through connected sensing devices.

However, the IoT concept is only as powerful as its infrastructure, and having so many connected smart objects has created new issues with communication, traceability of data, and integration of smart sensor technology – but blockchain could hold the solution to these limitations.

Blokt reached out to Ambrosus Global CEO Angel Versetti, to find out what makes the Ambrosus network the best crypto network for IoT, and how its multifaceted technology stack is changing the face of smart sensor implementation.

Established in 2017, Ambrosus is an open-source ecosystem that combines blockchain and the Internet of Things (IoT), for the management of physical assets derived from real-world industrial processes.

Known as “the Crypto for IoT” the Ambrosus Network integrates existing cloud computing technologies with a public permissioned blockchain to allow enterprises, governments, trade associations, and consultants to track and manage products in the real world securely.

Since its establishment, the Ambrosus project has expanded worldwide, with offices in Ireland, Switzerland, Estonia, and Belize.

The Ambrosus Network has multiple use cases, which are being continuously realized as the platform grows. However, there are some pressing issues and industries which Ambrosus is focusing on foremost, including IoT ‘friction’, counterfeiting, and the food and pharmaceuticals industry.

Currently, many parties implementing IoT solutions suffer what is known as ‘friction’ as a result of integrating multiple different software systems.

Enterprises might have one system set up for managing IoT devices and the data they collect, another for their enterprise resource planning (ERP) system, and a third for their blockchain.

In this scenario, “friction” occurs because it takes more time for data to move between networks, which means decision-making and data integration can be complicated or difficult to manage consistently and in real time.

Commenting on the frictionless nature of the Ambrosus network, Versetti says:

“The Ambrosus Network is unique, as the network has been designed to be optimal for commercialization as well as integration with IoT devices. Specifically, this concerns the Hermes Masternodes and the JSON model of Assets and Events that Ambrosus operates upon.”

Globally, the illegal counterfeiting industry is valued at $1.8 trillion. This could be reduced, or partially alleviated, through end-to-end data management via blockchain.

Of anti-counterfeiting through Ambrosus, Versetti explains:

“The purpose of combining blockchain and IoT technology is to ensure that data which is immutably etched onto a distributed ledger is also securely collected in the first place. Ambrosus is in a unique position to confront this problem, as it provides all of the tools for building blockchain and IoT solutions tailored towards data collection in the physical world.”

The Ambrosus Network and its accompanying IoT devices allow enterprises to customarily design solutions based around managing the physical and digital identities of specific products, through IoT and blockchain respectively.

IoT for Food and Pharmaceutical Enterprises

For example, data is siloed, product journeys are not effectively tracked, and as a result, consumer trust in food and pharmaceuticals is diminishing.

“IoT technology provides opportunities for large food and pharmaceutical enterprises to modernize their supply chains – to track and trace, as well as manage, the quality of their products; to gain better insight into their operation efficiencies and where they can be improved; and to re-establish trust with their consumers and build a stronger brand reputation.”

Although the Ambrosus IoT Network is particularly applicable to the food and pharmaceutical industries, it’s expected that the network will have a much broader scope in the future, allowing supply chain tracking of chemicals, manufacturing products, logistics, and more.

Ambrosus has a large technology stack, with multiple workstreams for both its physical IoT sensor technology, and its on-chain technology solutions.

The Swiss-based Ambrosus Innovation Laboratory, which designs Ambrosus’ technology solutions, is responsible for developing a range of sensor systems for IoT applications. Ambrosus’ sensors are divided into two groups, sensing platforms or edge gateways, and physical sensing devices, including tags, ties, and seals for products.

Ambrosus’ smart tags, seals, and ties are compatible with 1D and 2D codes as well as RFID technology. These solutions are perfect for implementation in scenarios which involve less technological infrastructure, especially in cases of managing core commodities across global supply chains or shipments that cross the ocean; such as core commodity tracking, recycling materials, and tracking shipping containers.

“It is also a gateway between other sensing devices already existing on the market, as the multi-sensing platform, once connected, can monitor even more types of data, for example pH, CO2, vibration, and pressure.”

The Ambrosus multi-sensing platform possesses its own unique hardware component, making it one of the only secure IoT devices on the market; in the sense that data is signed with a private key and permissioned before it is sent.

“Other companies in this space typically possess limited hardware, for example only RFID tags or select cold-chain logistics solutions, or a blockchain framework that is not optimal for commercialization.”

Instead, Ambrosus has the benefit of being able to combine a robust network, secure IoT sensors, and additional tooling to allow for management and app development all within one network.

Amber (AMB), an ERC-20 token on the Ethereum blockchain, is the native cryptocurrency within the Ambrosus Network.

Amber is a multi-purpose cryptocurrency. Primarily, AMB is used to access the Ambrosus Network, where it’s used for uploading and storing data onto the network, as well as being the underlying cryptocurrency required for decentralized apps built on the Ambrosus network.

Additionally, AMB can be used for tokenizing assets on the Ambrosus network, as well as for coding smart contracts. Amber is also used as a cryptocurrency in its own right, as a store of value based upon the growth of the Ambrosus ecosystem, and the various different industrial solutions that it powers.

Currently, users can trade AMB on several large exchanges, including Binance, KuCoin, and Mercatox, including many others.

When compared to other IoT blockchain solutions, Ambrosus is the only project to provide enterprises with the opportunity to manage and operate their own “Hermes Node” – the Ambrosus masternodes.

The Hermes node allows enterprises to connect existing IT systems, to decide which data is public or private, and to store their data in a local database before uploading a hash of their data onto the blockchain.

“The JSON model of Assets and Events that the Hermes Node is designed to operate upon flexibly integrates different IT systems onto the Hermes node, without the need for a separate proxy.”

This results in new enterprises being able to migrate their data and integrate their legacy IT systems with the Ambrosus network in a simple and easy fashion.

The Ambrosus incubator is an upcoming system where entrepreneurs will be able to license Hermes masternodes, leverage Ambrosus IoT devices, onboard solutions architects to create enterprise solutions, run startups on the Ambrosus network, and launch ICO’s and STO’s.

Of the development of the incubator program, Versetti says:

“The current interest from entrepreneurs is exceptionally high, and use cases range from product traceability and dApp development, to integrating Ambrosus into existing service platforms. In the future, Ambrosus is specifically interested in adding different sets of quickly utilizable IoT and blockchain solutions for entrepreneurs, for different use-cases or clients they may have already developed relationships with.”

Likewise, to facilitate development on the network, Ambrosus maintains a standard of open-sourcing as much of its network code as possible.

Additionally, Amborsus has just released its SDKs 2.0. These allow programmers to build dApps on Ambrosus network in more common programming languages such as iOS, Java, and JavaScript.

In the future, the current website for building solutions on Ambrosus will also showcase demos, as well as applications built by other Ambrosus developers, and a dedicated developer portal is the long-term vision for the open-source SDK’s currently available.

To date, Ambrosus has revealed industrial partnerships with projects such as PREMIUM Goods, a Madagascar Bourbon Vanilla Producer, Nongshim Data Systems for beef traceability, as well as other companies such as Blendhub.

More recently, Ambrosus has provided further information surrounding its intended expansion throughout Asia, and the development of clients in Japan.

Hinting at other partnerships, Versetti remarked:

“In general, Ambrosus is working with over one hundred enterprises at different phases of development. These enterprises take time to understand our technology, evaluate its potential, and then decide how and under what time frame it can be implemented”

Due to this gradual process of onboarding new clients and partners, the development process can range from 6 months to up to 3 years. However, what is certain is that Ambrosus already has interesting partnerships and a strong enterprise use case.

The Year Ahead for Ambrosus

This will include the development of dedicated wallets and crypto-related use-cases for AMB, including side-chain tokens and loyalty programs, as well as larger projects involving ICO and STO launches, and the creation of dApps on the Ambrosus network.

At the same time, Ambrosus will also be emphasizing the entrepreneurial and product manager components of its ecosystem, and greater focus will be given towards expanding Ambrosus solutions into new development areas such as smart cities or clean energy quantification.

Discussing the challenges of 2019, Versetti remarked:

“The challenges of the future center upon effectively explaining the value proposition of the blockchain and IoT solutions offered by Ambrosus, as well as implementing solutions for our clients. The blockchain space is quickly filling up with service providers offering similar types of solutions – and our opportunity for differentiation is found in the ease and quality of Ambrosus solutions which are implemented.”

As a result, the goal of Ambrosus in the coming year is to build the foundation for quality projects, dApps, and startups to effectively launch Ambrosus based solutions in their respective industries.

Ambrosus recently attended the Sydney EDCON – the community Ethereum development conference – an industry event for new ideas, projects, and use-cases to be shared and developed.

On the lead up to the event, Versetti remarked:

“Ambrosus CPO, Dr. Vlad Trifa, will be attending in the hopes of developing a better understanding of what other blockchain service providers are concentrated on going forward, and if there’s anything which the Ambrosus ecosystem could benefit from.”

A number of developers and prospective entrepreneurs attended the Sydney EDCON who are interested in leveraging the Ambrosus network and integrating it within their own solutions.

Speaking of the importance of these events, Versetti added:

“Industry events such as EDCON are excellent networking opportunities, but more importantly, they give the Ambrosus team an idea of the current state of development within the blockchain industry.”

Blokt would like to thanks Angel Versetti and the team at Ambrosus for sharing their expertise with us.