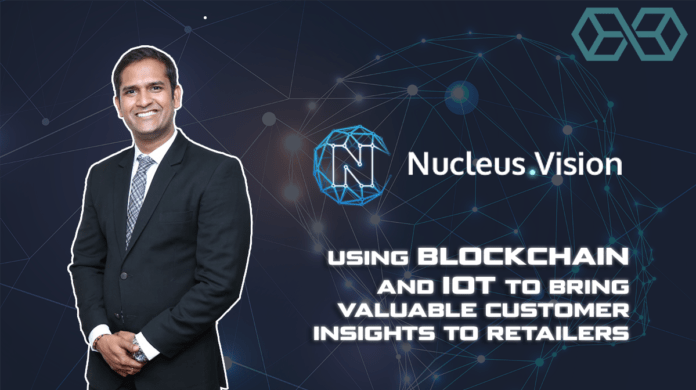 Although online retailers have more insight into their customer base than ever before, traditional brick-and-mortar stores are struggling to keep up with shifting technology, and footfall is dropping.

Online stores can use a wide suite of tools to define shopper personas, retarget the most likely to convert customers based on their previous online shopping habits, and likewise, access a wide range of social data to show adverts to their perfect target audience.

Now, there’s one company who want to bring these benefits to the traditional shopping experience, boosting both customer satisfaction, and increasing sales for retailers.

Blokt caught up with Nucleus Vision Founder and CEO, Abhishek Pitti, to find out how its technology was changing the way retailers interact with their customers.

What is Nucleus Vision?

Founded in 2014, Nucleus Vision is an internet of things (IOT) and blockchain based technology solution, which provides previously inaccessible customer insights to offline, brick-and-mortar retailers, to offer similar insights to those that online retailers enjoy.

Nucleus Vision was first established by Abhishek Pitti at Harvard Business School and has since received backing by prominent Silicon Valley venture capitalist Tim Draper, among others. In 2018, Nucleus Vision ran the largest token sale to date in India, for its native token nCash, which raised over $40 million for the development of the platform.

“We are building a robust, blockchain-based information network, powered by a universal loyalty program which enables brick-and-mortar stores to grow their loyal customer base. This loyalty program will use our unique utility token, nCash.”

Similarly, Nucleus Vision is also taking steps to bridge the gap between the online and offline retail worlds through an omni-channel retail strategy, which will help retailers offer a personalized shopping experience to their customers. This has led to Nucleus Vision recently launching its own proprietary payment solution, called nCash Pay.

Brick-and-mortar “dwell” time, the amount of time individual customers remain in a real, offline store, is falling. As a result, offline retailers have a much shorter time span in which to attract the attention of potential customers and increase sales conversions.

Instead of vying for customers attention through aggressive sales tactics, Nucleus Vision solves this issue by enhancing the information stores have on their customers.

“In these scenarios, personalization is a seemingly magic solution for enhanced customer engagement and increased basket size. However, there’s a catch. Customer personalization itself requires deeper insights, specifically at the point in which customers enter a store. Unlike e-commerce platforms, physical stores have been deprived of these solutions — until Nucleus Vision entered the market.”

To identify and assist customers, Nucleus Vision is using its proprietary ION sensor technology, to provide offline retailers with unprecedented customer insights as they enter their stores. Such insights could include upcoming life events, previous purchase choices, age, gender and more.

Based around blockchain, IoT sensors, deep-learning, and the nCash token, Nucleus Vision has a robust technology stack which it is leveraging to deliver its retail solutions.

Nucleus Vision has a range of unique IoT devices, which it has named “ION Sensors.” ION sensors don’t rely on RFID, WiFi, Bluetooth, or any other face detection technologies, but instead, identify customers linked via their mobile device.

The ION sensors then feed the data to a neural network known as “Neuron,” after which deep-learning algorithms within the Neuron network analyze customer data, providing real-time customer personas which help retailers inform and develop real-time communication.

The process of data transition throughout the Nucleus Vision network is carried out via a secure blockchain network called Orbit. Likewise, Nucleus Vision ensures customer privacy by allowing customers to opt-in to the service and only using anonymized data.

On Nucleus Vision’s deployment of its ION technology so far, Pitti shares:

“So far, we’ve partnered with and deployed our technology through some of the leading retail brands in India. During these pilots, we have analyzed the shopping behaviors of more than 400,000 customers and generated great value for our retail partners. Likewise, our deep-learning algorithms are constantly learning from the data that is being generated from customers and retailers.”

Pitti adds that Nucleus Vision is consistently making developments to its ION sensor technology through the feedback it has received from retail partners, and additionally, the Nucleus Vision team are making agile moves to expand the technology solution to more retail outlets.

The platform takes the data feed from Nucleus Vision’s ION sensors and analyzes the data to create customer insights which allow retailers to understand the individual customer’s needs who have just entered their store.

Similarly, Neuron’s backend infrastructure is dynamically programmed to integrate with any retailers point-of-sale system, which Nucleus Vision believe will improve data model efficiency and provide a tailored solution to shoppers, for example, showing them the latest deals.

The ORBIT blockchain network is the underlying chain which Nucleus Vision is built on, and ensures that information flows securely and accurately between all nodes in the system.

At present, Nucleus Vision is built using smart contracts on the Ethereum blockchain, which ensures the flow of information and rewards are absolutely transparent for all involved stakeholders.

Nucleus Vision’s native token, nCash, plays a major role in the wider Nucleus Vision ecosystem, allowing retailers and shoppers to share data among each other.

On the main roles of the nCash token, Pitti says:

“We implement decentralized monetization model where every stakeholder is rewarded for playing a role in transparent data exchange. We reward our shoppers with nCash tokens for authorizing data sharing and generating value for retailers.”

Additionally, the nCash token is used to run Nucleus Vision’s Universal Loyalty Program, which is powered by nCash. The loyalty program allows retailers to offer its customers personalized deals, and award them nCash tokens.

The Universal Loyalty Program is fully interoperable with other retailers, which means that customers who earn nCash can spend their tokens at any other retailer across the entire Nucleus Vision network.

Discussing the importance of a loyalty program for nCash rewards, Pitti explains:

“Customer retention is as important as customer acquisition. From our market research, we found 48 trillion reward points are unredeemed each year. Instead, we’ve introduced a token-based loyalty program, with nCash as the backbone. Our retail partners can reward customers with nCash tokens for sharing their interests and shopping preferences, and shoppers can use nCash tokens to make purchases.”

Online merchants signed up to nCash Pay can integrate the technology with their e-commerce sites, and accept payments in nCash rather than fiat. The integration is currently free of charge to help onboard new businesses and startups.

“Through nCash Pay, we are aiming to bring synergy between online and offline retail spaces, thereby empowering our omni-channel retail strategy. This will further expand the Nucleus Vision ecosystem.”

Pitti also added that Nucleus Vision is working on their product development to offer a more seamless experience for nCash Pay users. This has included the addition of a scan-to-pay feature which allows users to pay without leaving the payment gateway, and also a linked digital wallet into the nCash pay system.

At present Nucleus Vision are predominantly focused on the Indian and South-East Asian geographic areas.

Sharing why these areas are such a large focus for Nucleus Vision, Pitti says:

“The Indian retail industry is currently one of the fastest growing in the world, with the industry expected to grow to US$1,200 billion by 2021 with many opportunities for first movers in retail technology. We have signed up with some big names in Indian retail and have been running pilots, showing very encouraging results. The Indian government is one among those few governments that are supportive of IoT and blockchain startups.”

In August 2018, Nucleus Vision hosted the International Blockchain Congress in association with the Indian government.

On the adoption of blockchain solutions, Pitti added:

“The East Asian markets are conducive to cutting-edge technologies. For example, South Korea is at the forefront of the 4th industrial revolution with over 21% of its people acquainted with blockchain and its applications. We strongly believe that the East Asian and Indian markets, which are open to IoT and blockchain technologies, will open new doors for massive growth.”

Nucleus Vision believes that their solution will offer shoppers a personalized experience, which they won’t be able to find elsewhere.

The Salesforce Connected Shopper report revealed that 79% of customers want retailers to send them personalized offers based on their purchase history. As a result, Nucleus Vision believes that there is huge scope for widespread adoption of its technology.

“We are currently running pilots with our partners, who are excited to witness a 2.4 times growth in conversions. We are looking forward to taking our association with these brands to the next level and to expanding our sensor technology to more stores across India.”

To speed up adoption, Nucleus Vision has announced two partnerships with South Korean companies ZOYI Corporation, and Starfeed, which Pitti says are the beginning of its expansion into the exciting South Korean market.

Outlook for the Future

During 2018, Nucleus Vision delivered several technology milestones, as well as concluding its $40 million token sales. These included the launch of its ION Sensor technology, implementing new partnerships in South Korea, and towards the end of the year, the highly anticipated launch of nCash Pay; which escalated the circulation of the nCash token.

During the remainder of 2019, Nucleus Vision is expanding its operations, and Pitti shared:

“We are carrying the momentum in 2019, and see it as the year where we double down on shipping our product and market traction. This year, we are working on global market expansion, and strategic partnerships with key retail players.”

Blokt would like to thank Abhishek Pitti and the rest of the Nucleus Vision team for sharing their expert knowledge and insight.