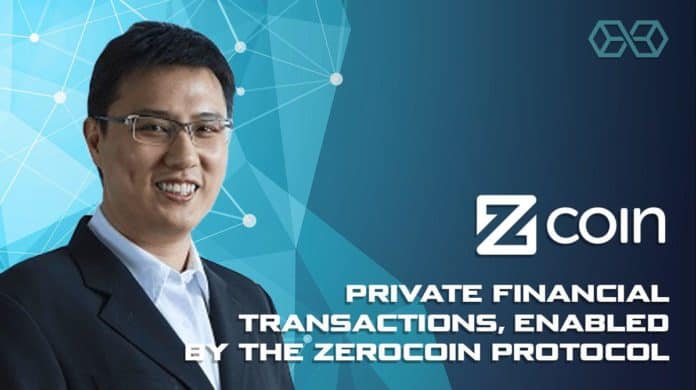 It’s a common misconception that Bitcoin transactions are completely private and anonymous. Whilst Bitcoin does offer greater level of privacy than traditional banking, users of cryptocurrencies like Bitcoin can have their transactions tracked through the public distributed ledger, and potentially give away valuable information.

Instead, privacy coins are a way to transact truly anonymously using a range of privacy-preserving methods.

Blokt spoke to Reuben Yap, COO of Zcoin, to find out why privacy-preserving technologies are essential to cryptocurrencies, and what makes the Zcoin team so passionate about them.

Established in 2016 by lead developer Poramin Insom, Zcoin is an open-source, decentralized privacy coin which focuses on achieving anonymity for its users while transacting on the blockchain.

“Poramin was unhappy about the lack of financial privacy in Bitcoin and Vertcoin, which he also co-founded. Instead, he decided to create a coin using the Zerocoin protocol to enable anonymous transactions, whilst retaining fair distribution.”

Insom and the Zcoin team achieved this by implementing an ASIC-resistant algorithm, essentially allowing anyone with a GPU or CPU to mine.

Zcoin is the first full implementation of the Zerocoin Protocol, which was first proposed by Professor Matthew Green from John Hopkins University (JHU) in the United States. An extension of the Bitcoin protocol, the Zerocoin protocol allows users to have complete privacy over their transactions via zero-knowledge cryptographic proofs.

Whilst studying his masters at JHU, Poramin learned about the Zerocoin protocol and has since integrated academic ideas with practical contributions to cryptographic research.

Bitcoin addresses are pseudonymous rather than actually anonymous, and whilst they cannot directly be tied to individuals, remaining truly anonymous while transacting Bitcoin is problematic as transactions are stored permanently and transparently on the blockchain. Because of this, transaction patterns between addresses can often give clues as to real identities.

Interested parties, such as companies or law enforcement agencies, expend vast amounts of resources to merge this available data and derive enough information to build a profile on and identify users.

To protect crypto users, Zcoin was the first project to implement Merkle Tree Proofs on its network to promote egalitarian mining; in addition to the Dandelion protocol which protects user identities by obscuring their IP addresses.

Additionally, as Zcoin’s blockchain is both permissionless and immutable, it was recently used in the Thailand Democrat Party’s primary election, where over 127,000 votes were cast securely, nationwide.

Sharing why privacy is so important to Zcoin’s fundamentals, Yap says:

“Zcoin believes financial privacy is a fundamental human right, and also necessary for cryptocurrency adoption. One of the primary attractions of cryptocurrency is as a self sovereign money. Uncensorability and privacy go hand in hand in protecting this. It is not so much about anonymity, as it is about having the autonomy to choose what data you reveal.”

Zcoin also promotes a fair proof of work consensus to encourage widespread distribution during initial trading of a cryptocurrency. Zcoin argues that other mechanisms, such as proof of stake, offer higher throughput but don’t aid coin distribution, instead of making the largest token holders wealthier.

How Does Zcoin Work?

Zcoin enables anonymity by “burning” coins and redeeming them for new ones without any prior transaction history. Here, Zcoin uses zero-knowledge proofs as proof of ownership of burnt coins, without showing which burnt coins they are – so that users of a new coin can be redeemed privately.

“Full nodes are a crucial part of any cryptocurrency network, but there are usually no incentives to run nodes, despite it costing money to do so. By paying Znode operators a part of the block reward, we create incentives to operate a node which benefits the network. We are planning to involve Znodes in upcoming network features such as governance and in providing better transaction finality and instant transactions, along with 51% attack protection.”

Znodes are designed to provide protection against 51% attacks, and also allow for instant confirmations on the network. Currently, Znode operators are paid out 7.5 Zcoin around every 15 days.

Zcoin, ticker symbol XZC, is both the namesake of the Zcoin protocol and its native currency. Notable uses of Zcoin include integration with CoinPayments, a secure payment gateway, which is used by thousands of merchants ranging from auto parts to honey sellers and VPN providers.

Sharing other methods of using Zcoin which are in development, Yap remarked:

“We have also integrated into Paytomat, a system that connects to existing point of sale devices, to accept cryptocurrency. Likewise, we are working on a way to spend Zcoin nationwide in Thailand.”

Crypto traders will find Zcoin on major cryptocurrency exchanges including Binance, Bittrex, and Huobi, as well as regional platforms with local Thai fiat pairings such as Indodax, Koinx, BX Thailand and Sistemkoin.

Zcoin has an existing smart asset platform, which it has named Exodus, that allows simple tokens to be created on their own independent ledger whilst being secured via Zcoin’s protocol. Zcoin has likewise stated that it is working on Themis, which will enable full smart contract capability on Zcoin.

“There are many smart contract platforms but few have fully developed privacy features. Business applications in the real world require privacy and it is hard to imagine a business scenario where it would be acceptable for the data to be public to anyone.”

When interacting with a smart contract, businesses may not want to reveal the parties involved, and most definitely wouldn’t want to reveal on a public ledger the value of their transactions. Other examples include voting applications. Privacy-preserving smart contracts would instead facilitate data sharing without revealing its contents.

Cryptocurrency transactions spread through networks in a distinct pattern, which allows interested parties to trace a transaction back to its originating IP address. Studies show that the accuracy of these techniques can be as high as 50%.

“The Dandelion protocol adds an element of randomness – otherwise known as high entropy – to transaction patterns, making harder to pinpoint the origin of a transaction. It achieves this through modifying the way nodes communicate with each other in a two phase method known as the stem phase and the fluff phase.”

Sigma is the replacement for the Zerocoin privacy protocol, still based around zero-knowledge proofs, but around 20x smaller than Zerocoin’s proofs, which yields much faster validation times.

“One important aspect of Sigma is that it is not based on a trusted setup. When a new cryptographic system which requires a trusted setup is launched, initial parameters have to be created. The issue with this is that you have to trust the project to destroy these setup parameters, otherwise they could create unlimited coins.”

As Sigma’s cryptographic construction is relatively simple compared to Zerocoin or Zerocash, it is much easier to audit and reduce the chance of flawed code which is commonplace in more complex protocols.

There have also been other projects which have implemented the Zerocoin protocol or expanded its capabilities. These include NAVcoin, with its ZeroCT paper; or PIVX that is using a Zerocoin implementation which uses “bulletproofs.”

However, the Zcoin team has a strong development roadmap ahead. Yap shares:

“Implementing new or novel applications in cryptography and zero knowledge proofs is not easy, so most projects generally adopt privacy protocols developed by larger projects. Instead, Zcoin will continue pushing the frontiers of our privacy technology, such as the deployment of Sigma and Lelantus, which will replace the Zerocoin protocol in Zcoin.”

The Future of Zcoin

In addition to the replacement of Zcoin with the upgraded Sigma protocol, the team at Zcoin have big plans for the future.

“Too many projects are solutions looking for a problem, and blockchain has been promoted for a wide range of uses, not all of them applicable. This is why Zcoin has been focusing on real world use cases for our currency and our blockchain together with technical development.”

Yap also shared that Zcoin is focusing on building a community which aligns with its core privacy beliefs, looking beyond monetary gains and instead promoting constant education and communication.

As far as the short-term outlook goes, Yap shared:

“We are looking at two main goals in 2019 and 2020. One is Lelantus, our next generation privacy protocol that greatly improves privacy and usability. Lelantus’ academic paper is available for review, receiving very positive feedback from top cryptographers. The other is governance for funding and guiding the development of Zcoin beyond just the developers and miners – which is how it is with Bitcoin. We look forward to tackling these challenging issues!”

Finally, we asked Yap how Zcoin responded to critics who argued that anonymous cryptocurrencies could be used to facilitate criminal activities, to which he responded:

“Financial privacy should be seen as a universal human right. Let’s not forget that today, crime can be facilitated by cash or even money passing through banks. We have all seen from countless breaches that centralized organizations, even large established entities, cannot be trusted with keeping our private data secure.”

Blokt would like to thank Reuben Yap and the entire Zcoin team for sharing their valuable insights with us.