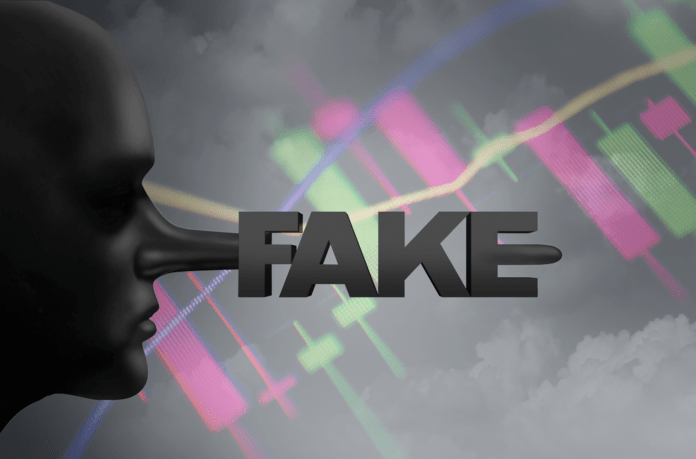 An article has emerged that claims to show why more than $3 billion of crypto-assets’ volume could be fake. The writer, Sylvain Ribes believes that Okex and various other exchanges are fabricating up to 93% of their volume.

Contents hide
1 The evidence presented
1.1 Related Articles:
2 How much volume is fake?
3 Why should we be concerned?
4 Caveat

Okex has consistently ranked as a top exchange rated by volume on the popular websites Coinmarketcap and Livecoinwatch. If the claims are valid, then Okex’s status as a top exchange has undoubtedly been misleading and potentially costly to many investors.

Okex is a cryptocurrency exchange located in Hong Kong with a mostly Chinese customer base. They state on their homepage that they are “The Most Trusted Digital Asset Exchange”. Readers can decide for themselves on that after reading this article.

By using publicly available data, Sylvain demonstrates that selling $50k in assets would cost Okex users more than 10% in slippage on many crypto pairs that have up to $5 million volume. This includes NEO/BTC, IOTA/USD and QTUM/USD which are not illiquid or low-profile assets. He shows that this slippage is massive when compared to the same assets on Kraken, Gdax, and Bitfinex.

Sylvain defines slippage as the percentage change between the observed mid-spread price and the lowest price he had to consent to when selling the asset.

It makes one ask the question – why is so much slippage needed to fill an order on Okex, when they are supposedly one of the highest-ranking exchanges for volume?

How much volume is fake?

Sylvain then moves on to deciphering how much of the volume on Okex is likely fake in percentage terms. He does this by gathering data from multiple trustworthy exchanges and uses it to show volume as a function of slippage. The exchanges include Gdax, Bitfinex, Poloniex, Kraken, Gemini, and Bitstamp.

In Okex’s case, Sylvain claims that 92.9% of the volume is most likely fake. The same model shows that Huobi which is Okex’s most direct competitor could have 81.8% fake volume.

Why should we be concerned?

As the cryptocurrency market is unregulated, wash trading / artificial volume creation are not technically illegal activities. However, it’s still important to spread awareness of them.

If market participants do not demand the removal of such practices, they will have a negative impact in the following ways:

Sylvain states himself that he is not an academic or statistician, and therefore his numbers should not be taken at face value. Factors like API conditions, exchange fees, data sample size, hidden orders and different consumer-bases could affect the results.

Sylvain is very confident about his claims and welcomes anyone to argue differently. His medium article can be found here with the full details of all the data and analysis he has used.