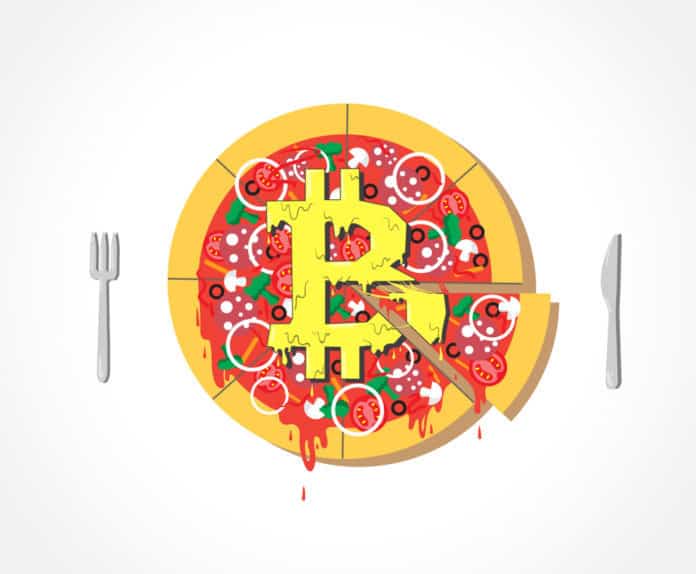 May 22 is known as Bitcoin Pizza Day, in commemoration of Laszlo Hanyecz’s purchase of two Domino’s pizza for the then reasonable price of 10,000 BTC back in 2010. The significance of this was more than just the price, however. Laszlo was an early Bitcoin developer, and he intended to show its viability as a currency. The pizza purchase was one of the first purchases ever done using Bitcoin.

That said, 10,000 BTC would be worth over $100 million at today’s prices, enough to buy about 10 million large Domino’s pizzas. This Twitter account documents the ‘Pizza Index,’ just how much those pizzas would be worth on a daily basis. No wonder the story is legendary. And now, he’s back at it again, this time with the Lightning Network.

On Feb 25, 2018, Laszlo bought another two pizzas, this time on the Lightning Network. According to his post on the Lightning-dev mailing list, no pizza places near him accepted Lightning Bitcoin yet. So he had a friend in London ‘sub-contract’ the pizza delivery to a local shop. Although in this case, his friend had to act as a middleman, as Laszlo puts it:

“In this trade my friend is just a middle man that is taking the risk on accepting lightning payments, but it demonstrates the basic premise of how this works for everyday transactions.  It could just as well be the pizza shop accepting the payment directly with their own lightning node.”

As for the price that Laszlo paid for his two pizzas, this time it was a much more reasonable price of 0.00649 Bitcoin, which equates to about $69 (actually that’s still quite pricey for two pizzas!). Laszlo ends his post with a link to pictures of his family enjoying the pizzas, which you can view here.

Lightning Network is a system built on top of the Bitcoin network to solve its scalability issues. The idea is to take a lot of the load off the Bitcoin network by having users make transactions directly with each other through its off-chain payment channels rather than through the public blockchain.

At the moment, Lightning Network is still in the testnet stage, and its token, Lightning Bitcoin, only trades on the futures market. However, some people are so enthusiastic about its potential that they have already started making real transactions with the still-in-development network. At present, there are 895 nodes and 1,460 channels in Lightning’s mainnet implementations, and it only keeps growing.

Lazlo’s pizzas aren’t the first purchase of physical goods through the Lightning Network. That event supposedly happened on January 20, 2018, for an AR300M VPN router through TorGuard. The whole thing is documented in this Reddit thread.

To prove that he had indeed paid for the pizza, Laszlo showed the driver his payment hash preimage. However, as Laszlo says,

This was an experiment for him to prove the viability of a new network once again, and it looks like he has once again succeeded.