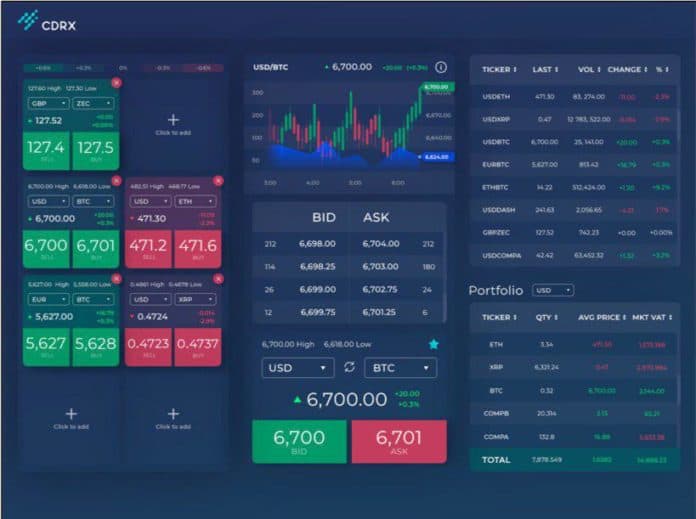 CDRX could be soon pioneering a paradigm shift in equity investment, through its securitized equity tokens labeled Crypto Depository Receipts (CDRs). The company is introducing an alternative to replace traditional investment instruments like equities and bonds, bringing investment opportunities to everyone that purchases the token, not only wealthy individuals and accredited investors.

In a medium post shared by CDRX  titled “8 reasons CDRs are blockchain’s killer app,” the company defines CDRs as securitized tokens issued on a blockchain that hold a class of shares. Furthermore, the CDRs allow for fractional ownership of shares, thus removing the need for share splits. The company’s CEO, David Ward, suggest that CDRs are, in a way, an adaptation of American Depository Receipts.

Ward said, in an article published on Reuters:

“We are gratified to see large broker/dealers also now embracing our idea. ADRs are a 90-year-old proven and trusted approach, which when combined with technologies perfect for use in financial markets, will drastically increase efficiencies for investors and issuers alike.”

He added that CDRs fit into existing technological and legal frameworks and that once regulatory approval is granted in selected jurisdictions, the company will start trading on household names as of early 2019.

CDRX explains that CDRs stem from a common need of both securities issuers and investors. The company uses blockchain as a decentralized registry to keep of track of ownership and smart contracts to execute the vast majority of corporate actions rather than the cumbersome, slow and manual paper-based work. Additionally CDRX promises near real-time settlements and extremely low transaction costs.

Through CDRX, shares in publicly traded companies are bought from a given market or corporate entity and placed within a trust or a custodian bank. Custodians then issue blockchain based CDRs in conjunction with CDRX in the form of tokens. Those tokens are coded with built-in mechanisms of regulatory compliance and market integrity protection. Other embedded functionalities of CDRs include granting voting rights to owners and entitling them to receive dividend payments.

CDRX states that each CDR issued by the custodian is one-for-one asset-backed. CDRs give owners the inherent benefits that come with stock ownership, along with a solution to traditional financial market inefficiencies.

According to the company’s official website, CDRX is currently working on its own exchange where “crypto instruments (coins, tokens, and CDR’s) can be freely traded.”

By cutting administrative, management and operational fees through use of blockchain and computerized processes, CDRX lowers commissions by a significant margin bringing it to as low as 15 cents, according to a video made by CDRX.

Furthermore, the company claims that dividend allocations are significantly cheaper to administer to investors via CDRs since “On-Token” functionalities enable issuers to pay dividends directly while avoiding cumbersome bank fees.

The company suggests that billions of dollars in corporate actions could be avoided while offering an easy means of participation to shareholders in corporate decisions through voting rights granted by CPR ownership.

Through fractional ownership, CDRs could also open the market to the small individual investor, that couldn’t otherwise circumvent the high-barriers to entry which are typical of the equity market.

CDRX alleges that its in ongoing discussions with regulators. The latter has reportedly shown a genuine interest in blockchain “particularly where it aligns with a regulatory mandate.” CDRX reiterated its commitment to working closely with regulators across all jurisdictions.

The Singapore based company is currently conducting its pre-ICO phase that started November 5, 2018 and will end on November 19, 2018. The main ICO event will take place between November 19, 2018 and December 23, 2018, but may close early if the 200 million ERC20 utility tokens up for sale are fully allocated.