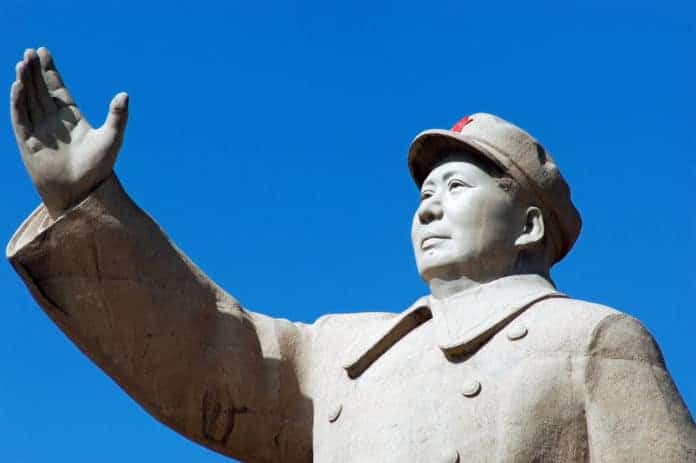 According to Reuters, many attendees at the conference called the event “shameful” and disrespectful to China’s founding leader. Others stated that it could damage the blockchain industry’s image moving forward.

Xu Guoxiang, the Chinese actor that imitated Mao Zedong appeared in a grey suit and spoke with a Hunan Chinese accent, an accent that originated from Mao’s birth province. Mr. Xu stated at the conference, “I sincerely hope this forum is a success. I thank you in the name of Mao Zedong!”

According to a video on WeChat, the Mao Zedong impersonator stated to audience members that “you are worthy of being called the great sons and daughters of the Chinese nation, and I thank you in the name of Mao Zedong.”

Unfortunately, the publicity stunt borders Chinese laws. Any calligraphy, images, and representation of leaders in any form, past, and present according to Chinese laws cannot be used in television advertisements and promotions. The Chinese government has also prohibited actors from using images of national leaders to promote goods and services.

“Blockchain is a fledgling business that warrants the attention and open attitude from the government, and we will not tolerate any scam behavior that disrupts industry order in the name of blockchain,” said a user on WeChat.

The conference organizers quickly apologized for their actions and the publicity stunt on their website. The BBC however recently reported that the government had heavily censored any discussion concerning the Mao Zedong impersonation.

The organizers of the Chinese blockchain conference were deeply apologetic for their actions as seen on their website and in a WeChat post. They stated, “we are sorry for the negative impact our conference had on the public, and we will continue to execute the conference with high standards.”

Industry participants, however, do not appear satisfied with the apology. A WeChat post read “please stop being so manipulative. Will there be a Wuzhen World Blockchain Conference in a few days?” The anonymous project manager referred to the Wuzhen World Internet Conference, an event where tech leaders meet in Wuzhen. The comment refers to the fact that a lot of blockchain conferences in China are often hosted at famous and popular venues to deceive the public.

Furthermore, the Boao Asia blockchain conference had a backdrop and marketing material that looked very similar to the official Boao Forum. According to China Money Network, another blockchain investor had also expressed his outrage, but for different reasons. He said, “you invited chairman Mao, are you not paying respects to our current leader president Xi.” An anonymous blockchain media manager also mentioned: “all blockchain conferences, please fully disclose all speakers and actors invited to attend in order for us to support you.”

The Mao Zedong impersonation is not the first event publicity stunt gone wrong. Just recently last week, a publicity stunt from a Ukranian startup which involved climbing Mount Everest reportedly led to a death. Unfortunately, according to Alan Arnett’s blog, a Colorado climber who often covers Everest events, he believes that the death was “preventable.”