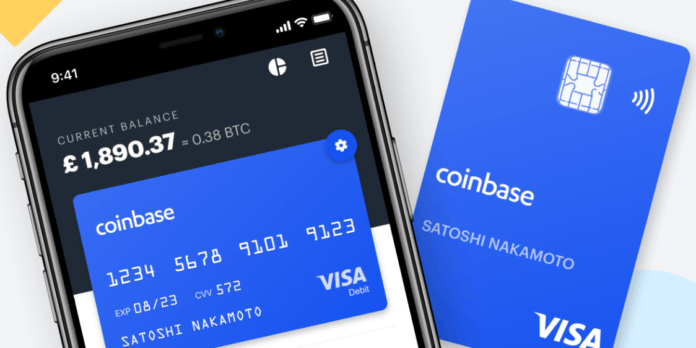 US-based cryptocurrency exchange Coinbase has made its Coinbase Card available to customers in the United Kingdom.

The Visa debit card will enable Coinbase users to spend cryptocurrencies effortless in millions of locations around the globe.

San Francisco-based cryptocurrency exchange, Coinbase, announced a few hours ago that it had launched its Coinbase Card in the UK. According to the official blog post, the Coinbase Card is a Visa debit card designed to allow customers to spend cryptocurrencies effortlessly in millions of stores and online platforms across the globe.

The debit card is powered by the crypto balances of customers’ accounts, allowing them to pay for goods and services using BTC, ETH, XRP, LTC, and other supported cryptocurrencies. UK customers can use the debit card to make payment via contactless and Chip and PIN methods. The card can also be used to withdraw fiat currency from ATMs. According to Coinbase:

“When customers use their Coinbase Card, we instantly convert crypto to fiat currency, such as GBP, which is used to complete the purchase.”

The development team launched the Coinbase Card app to help customers manage their spending. The card app allows users to choose which cryptocurrency wallet they will use to fund their Crypto Card purchases.

“Coinbase Card supports all crypto assets available to buy and sell on the Coinbase platform, meaning they can pay for a meal with bitcoin, or use ethereum to fund their train ticket home. The app also offers instant receipts, transaction summaries, spending categories, and more.”

We’re excited to announce Coinbase Card, a Visa debit card that lets UK customers spend crypto as effortlessly as the money in their bank. Available today in the UK, and in the EU in the coming months. We'll look to expand internationally later this year. https://t.co/Yf36PL57S8 pic.twitter.com/2LJRj49Y60

Coinbase added that it is forfeiting the £4.95 card issuance fee for the first one thousand people to join the waitlist for the card. The Coinbase Card app is available for both iOS and Android smartphones. When a Coinbase account is linked on the mobile app, the crypto balance will be available to users via their virtual and physical cards.

The Coinbase community is excited by this latest development as they believe it will help with the adoption of the cryptocurrencies. Meanwhile, EU users are anticipating the availability of the Coinbase Card service in a few months.

On April 8, Coinbase announced that trading of EOS, REP (Augur’s native coin), and MKR (MakerDao) would be supported on Coinbase Pro, its professional trading platform. The tokens were made available in all jurisdictions with the exception of New York State.

Coinbase revealed that EOS and REP would have BTC, USD, and EURO trading pairs while MKR can be purchased using BTC and the USDC stablecoin.

Investors Should Buy Cryptos As They Are Set for Fresh Gains,...

Tezos Set to Pass Historic Vote, Will It Push Its Price...