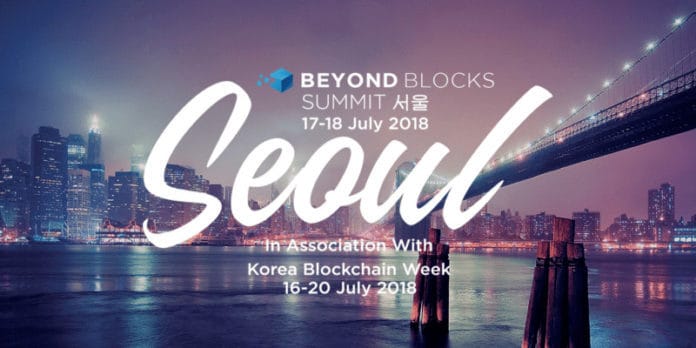 Korea Blockchain Week is setting up perfectly for organizers and attendees with excitement levels increasing on a stream of pro-blockchain news coming from the country recently. The most recent news report states that the Korean Government is working on a classification system which could legitimize the blockchain industry.

The flagship event of the entire week is the Beyond Blocks Summit Seoul scheduled for July 17th and July 18th. Beyond Blocks have put together an agenda “focused on the most controversial topics in the current blockchain space” to be discussed in-depth by industry-leaders, including Galaxy Digital’s CEO Michael Novogratz and ICON Foundation’s JH Kim.

I spoke to Gabriel Yang the COO of Beyond Blocks last week, who provided some exclusive insight on the event and the state of the blockchain industry in South Korea. On the Korean market he stated:

“Korea as a market, in Asia, is very very interesting. If you look at everything that’s happening, especially in the ICO space, Korean projects are the ones that make people go nuts. They probably have, besides Japan, one of the most established ecosystems.”

According to a recent report by The BChain, the South Korean Government is drafting a new blockchain industry classification system with the final draft expected to be released by the end of this month.

Multiple agencies including the Ministry of Science and Technology, the Ministry of Information and Communication and the National Statistical Office have been working on the new classification system.

The report is big news not only for Koreas local blockchain industry but the industry globally as Korea appears to be aligning itself with the G20 directive of unified regulations. The report seems to have come perfectly timed just before Korea Blockchain Week and is sure to be discussed during the event.

The new classification system will break down the blockchain industry into three main categories, “Software development and supply business,” “Computer Programming, System Integration and Management” and “Information Service Industry.” Each category is then broken down further into subcategories. The categories cover many key areas including guidance for DApps (decentralized applications), cryptocurrency mining, exchanges/brokerages, blockchain based games, financial security, insurance and more.

Other notable reports coming out of Korea recently include the redefinition of cryptocurrency exchanges as “regulated financial instruments” and proposals to allow ICOs in the country.

Gabriel spoke of ICO regulations during our conversation. He said:

“With the new regulators, rumors are saying that the regulations will be loosened, there will be boundaries around it, but it’s not going to be a full ban anymore. If they’re going to be considered as securities or something else is still in discussion. But, everybody foresees that by the end of this year, ICOs to a certain extent will be allowed.”

Korea Blockchain Week states that it is “Asia’s most prominent blockchain conference, happening for the first time in Seoul, South Korea.”

Factblock, Beyond Blocks, and #Hashed will present the five-day blockchain community event. Speaking of his co-hosts, Gabriel said:

“We are also partnering with two very key players in the Korean market, one of them is probably one of the best-known accelerators in Korea and around the world, #Hashed. The other co-host is a new ICO advisory platform called Factblock. The interesting thing about Factblock is that they are also backed by and a subsidiary of The Financial News. The Financial News is one of the largest financial publications and media outlets in Korea.”

There are 12 events scheduled for the week on the Korea Blockchain Week website including “The Crypto Connection,” “The Unofficial Pre-Party,” “DNA Investor Lunch,” “Women in Blockchain” and more.

Beyond Blocks – A Centralized Space to Discuss Decentralization

The Beyond Blocks Summit Seoul is the flagship event of the week and has the aim of “Connecting Korea with the world,” The two-day summit gives attendees the opportunity to meet and network with industry thought-leaders, investors, developers, and enthusiast. Beyond Blocks are expecting over 2000 attendees and more than 50 speakers.

“The objective is not only to connect people but also to discuss and share about the current trends and the state of the blockchain industry, with one eye on the future. All of our content, all of our discussions are about what’s happening in the space today and how we can affect the space tomorrow.”

When discussing Beyond Blocks decision to pick Seoul as a location Gabriel explained that there’s so much going on in the Korean market, and one of the things that Korea really wants to do is “connect with the rest of the world.” On top of this, he says there is a lot of excitement for Korea coming from the outside, not just in Asia but also around the West, stating “there is a key curiosity about what is happening in Korea.”

Beyond Blocks wants to be a gateway to Asia for the West and elsewhere by providing an introduction to those who want to take the first step into the Asian market.

I asked Gabriel what his thoughts were on the price decline of cryptocurrencies this year and if he feels it has affected interest levels in Asia. He responded:

Summit speakers and exhibitors there on merit

Of the 50 speakers, Gabriel told me he was particularly excited about Michael Novogratz, the founder of Galaxy Digital Capital Management and Michael Arrington, the founder of TechCrunch.

Talking about Novogratz, he stated:

Talking of Arrington, he stated:

“I’m a huge fan of his, he’s somebody I really respect a lot. He started out with media, moved into traditional investments, from investments he moved into cryptos. He’s done it all.”

All the speakers at the event will engage in discussions set out by the Beyond Blocks agenda, including topics like ‘the state of blockchain in Korea’, ‘regulations and disruption’, ‘the definition of a successful ICO’, ‘investing in the industry’, ‘payments on the blockchain’, ‘mass adoption’ and more. Gabriel insists that all speakers and even the sponsors of the summit are there on merit coming from reputation. He explained this decision “has caused a lot of pain for us but we are very strict on that.”

As a final point, Gabriel said:

“If your passion is really in the blockchain space, either from the investment or the project perspective we really hope to see you there, we hope to give you the necessary knowledge and the necessary connections.”

For those interested in attending the event, tickets can be purchased at the Beyond Blocks website. Readers here can get a 20% discount on the price by using the code blokt20seoul at the checkout.