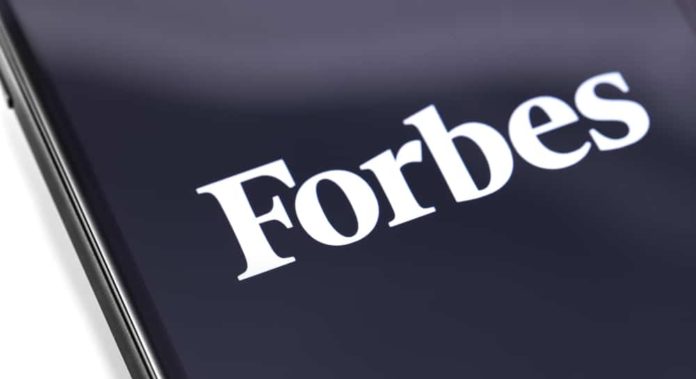 The list was derived from a wider selection of 100 globally acclaimed corporations actively exploring blockchain applications and was refined to only rank those operating on U.S. soil and having minimum revenue or valuation of $1 billion.

Blockchain Research Accelerates at the Corporate and the Governmental Levels

The list published by Forbes and named “Forbes Blockchain 50,” came right on time, to prove that the ongoing crypto downswing, doesn’t seem to have had far-reaching effects on the technology underlying digital assets’ transactions.

In fact, Forbes cites a PwC survey where among 600 blockchain savvy executives, 84% admitted that their companies are in some ways involved with blockchain technology. While the use cases being investigated by the “Forbes Blockchain 50” widely vary from one company to another, all big companies alike seem to have converging intentions: harness the potential of the technology in service of their operating needs.

This trend seems to be consistent with the executive visions at the governmental level on the technology. Forbes recalled in the publication the fact that according to the International Data Corp., government spending on blockchain related research should total $2.9 billion in 2019. This represents an 89% increase as compared to data from last year. The amount could reach $12.4 billion by the year 2022 according to the same findings.

A More Pragmatic Approach to Decentralization

A closer look at the type of blockchain most of these companies are setting up; however, contrasts with the utopian perspective the early blockchain enthusiasts have adopted. In fact, it looks like big corporations have a pragmatic approach towards the technology, which is very different from that described in the Bitcoin whitepaper.

They seem to be embracing it solely to speed up business processes, minimize manual work and time consuming/labor-intensive tasks, and eventually cut operational costs and save billions of dollars. Far from slashing middlemen and intermediaries out of the equation and putting the whole financial world -as we know it today- in obsolescence, big corporates are testing public blockchains to pinpoint the root cause of its failure to go mainstream: in other terms scalability and design limits. The intent most likely being to build private blockchains as a replacement to centralized management.

Twenty-two companies among the list are testing the Ethereum public blockchain (it’s worth noting that many are testing Ethereum-derived blockchains we didn’t account for in the following) for their operational interests, while twenty-four are exploring one of Linux foundation’s hyper ledger cross-industry blockchains (Fabric, Burrow, Indie,..). Corda, Quorum and the IBM Blockchain are also being heavily tested but to some extent, while Facebook is listed as testing an unknown platform.