BloktPrivacy, Tech, Bitcoin, Blockchain & Cryptocurrency
Home News Report Shows That 85% of Cryptoassets’ Protocols Can Be Changed at Will

On 17 October 2018, crypto comparison resource CryptoCompare published the “Cryptoasset Taxonomy Report 2018” for the purpose of properly classifying the numerous cryptoassets that have emerged since Bitcoin. The taxonomy was a deep dive into over 200 of the most valuable crypto assets in the space today.

One of the most surprising findings in the report was the revelation that the project teams of 85% of the studied cryptoassets have the control or decision-making authority to change their governing protocols at their own discretion. 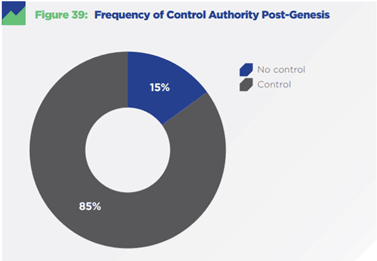 The implications of such a finding raise questions as to the concentration of control at the hands of project teams for many crypto projects. In the non-crypto world, such a statistic would not raise any eyebrows; in fact, it is realistic to expect that a full 100% of project teams for non-crypto assets have full control over said assets.

But with the whole theme of crypto being “decentralization,” this concentration of control calls into question the level of decentralization actually being implemented such projects.

55% of Cryptoassets Could Be Classified As ‘Centralized’

Further adding to this is the statistic that a full 55% of the studied cryptoassets could be classified as “centralized.” 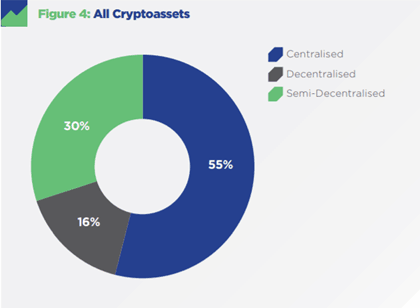 The definition of “centralized” that the report uses is:

“A small group, usually the company or foundation, is responsible for the majority of decision-making regarding technological development and maintenance.”

While the picture painted of the larger crypto scene by the above statistics is not a promising one, the picture does look much better when we take into account market cap. While a small majority of projects might indeed be “centralized” (no matter what the developers say), the larger and more established projects are actually decentralized. 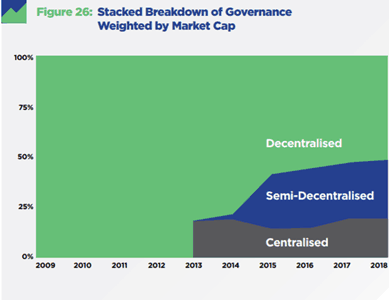 “Some aspects of technological development and maintenance are controlled by a powerful minority.”

The takeaway from all this is that while crypto and decentralization have become almost synonymous, this is not necessarily the case. One of the major cryptoassets that the report explicitly calls out as being centralized, for example, is Ripple, in which a major point of contention has been the control of the majority of the circulating supply at the hands of the project team.