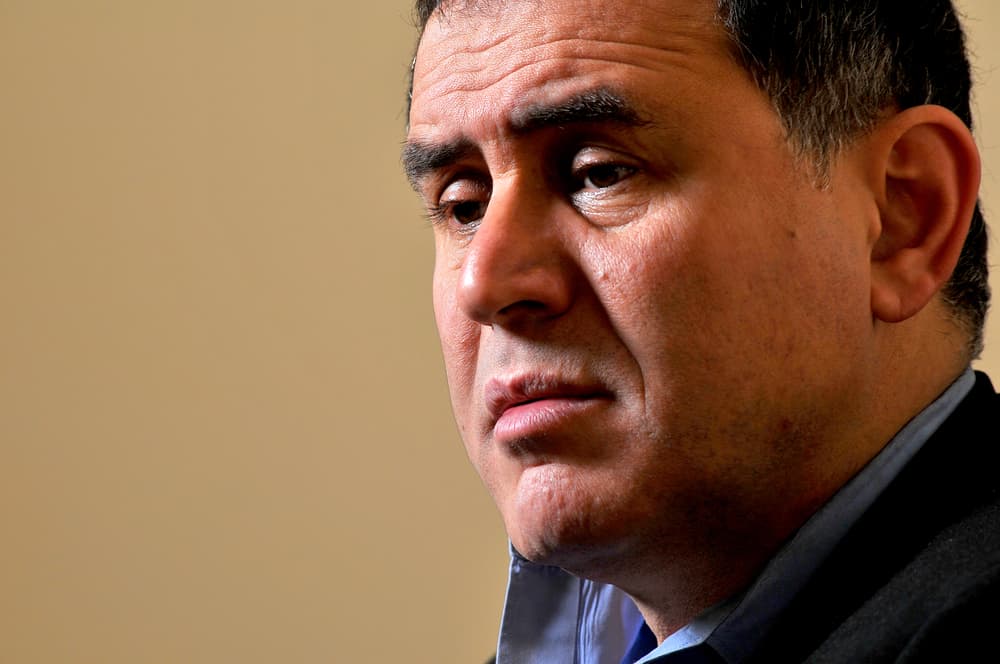 Call it an emotional outburst or a deliberate ploy to get his point across, Nouriel Roubini, aka Dr. Doom, seems to be shooting (metaphorically, of course) in the general direction of anyone who disagrees with his take on the crypto economy. At this point, it wouldn’t probably be much of an exaggeration to call some of Roubini’s recent tweets mere wild rants that could potentially get him into legal trouble.

Buterin vs Roubini: Dr. Doom Lets Emotions Get the Better of Him

Earlier this week, Blokt covered the Twitter spat between Dr. Doom and Ethereum cofounder Vitalik Buterin about the legitimacy of the premine phase of Ether.

Well, a lot has happened since, and the spat seems to be intensifying as both Buterin and Dr. Doom prepares for a live debate to settle the matter once and for all. For those who haven’t been in the loop, Roubini called the premining of Ether a deliberate scam and criminal activity.

He went a step further with his allegations by calling Vitalik Buterin and Joseph Lubin, cofounders of Ethereum, “ring-leaders” of the “scam.” He added:

“They [Buterin and Lubin] stole 75% of the Ether supply and became instant ‘billionaires’ of fake wealth.”

Buterin responded to the allegations saying that he is not a “billionaire” and holds roughly “0.9% of all ETH.” The 24-year-old Ethereum cofounder also pointed out that premining is not considered a crime by any existing law.

The war of words continued for some time with both Buterin and Roubini, along with their respective supporters, using the microblogging platform to exchange verbal blows. Buterin challenged Roubini for a live debate, to which the latter agreed.

In the meantime, Roubini resorted to calling people names, especially those who he couldn’t seem to agree with. The spat officially entered the next level with enough ground for a possible lawsuit against Dr. Doom.

Will Dr. Doom Be Slapped With a Lawsuit?

As Buterin and Roubini agreed to participate in a live debate, Arthur Hayes, co-founder, and CEO of cryptocurrency exchange BitMEX, offered to host the debate.

Roubini’s response, for whatsoever reason, seemed a bit harsh rather cranky and a potential troublemaker. To quote Dr. Doom:

“I have no intention to have a scammy crypto exchange that trades against its customers to sponsor a debate.  [A] typical cesspool of crypto trading where massive price manipulations occur: pump n dump, spoofing, wash trading, front-running customers, etc.  BitMEX is a criminal scam.”

Hayes retorted by calling Roubini a “troll,” and many “onlookers” criticized the famed economist for his poor choice of words and what appears to be mere mud slinging (unless Roubini goes ahead and substantiates his allegations against BitMEX).

One user Tweeted in response to Roubini’s rants:

“Keep your emotions for your bedroom.”

Jake Chervinsky, associate at Kobre & Kim and a familiar name within the crypto space, jumped into the raging debate and cautioned Dr. Doom against crossing the red line, citing possible legal repercussions.

Not your lawyer, but if you're going to be a troll, try sticking with vague allegations against "everyone" or 99% of," etc.

Accusing a specific person or company of criminal conduct exposes you to liability for defamation. "But I only said it on Twitter" isn't a defense. https://t.co/Y12nDcswMj

Chervinsky, however, later pointed out that it is unlikely that BitMEX will follow through with a lawsuit against Dr. Doom as it will needlessly expose the company to the jurisdiction of a US court.

So how excited are you about this live debate between Buterin and Roubini, assuming it happens? How sure are you (or not) that Roubini’s allegations against Buterin are grounded in fact and logic? Do let us know in the comments below.

Coinbase Users Can Now Earn DAI by Learning About the Stablecoin