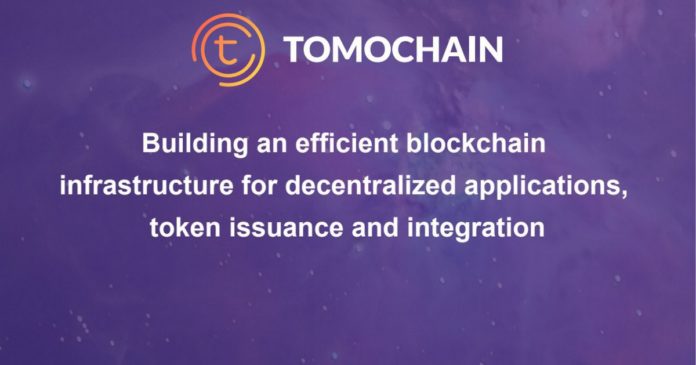 From their earliest days, financial innovations have found themselves muscle bound. The earliest and most successful mutual funds quickly found themselves the victims of their own success, growing too large to operate efficiently and seeing their once top-notch returns plummet back to earth. The same thing happened with some of the most successful exchange-traded funds, limiting their future growth prospects and threatening to derail a promising part of the financial industry.

Now the same thing is happening in the cryptocurrency arena. As the popularity of Bitcoin, Ethereum, and other cryptocurrencies continue to rise, some investors are finding that the blockchain is not as scalable as they would like. That is where TomoChain comes in – this innovative new startup aims to solve the scalability of the Ethereum blockchain in particular, and the cryptocurrency world in general.

By adding second layer blockchains and integrating them into the Ethereum network, TomoChain aims to create a kind of ongoing backup and cross-chain transfer. The team at TomoChain envisions the company as a network of chains, all designed to support the instant confirmation of transactions. Just as importantly, the company aims to do this with a near zero transaction fee.

TomoChain sees its smart contracts as the ideal solution for the decentralized apps, token issuances and token integrations that have become integral parts of the cryptocurrency market. In order to accomplish its goals, TomoChain has created its proprietary TomoCoin, ticker symbol $TOMO.

The TomoCoin will also serve as the protocol token for the entire TomoChain infrastructure. Since it has a fixed supply, $TOMO will trade freely, based largely on supply and demand in the larger marketplace.

When we reached out to the team at TomoChain, they explained the purpose of their token as follows:

“$TOMO is important in several dimensions to the Tomo network, firstly, $TOMO will be used as a source of funding to complete the development of TomoChain, and TomoWallet; secondly, $TOMO being used in the Reward Engine/ Ecosystem Building program as an incentive mechanism to build Tomo network community; thirdly, $TOMO being used as a long-term decentralized governance instrument of Tomo network, that means we will build tools to gather opinions from coin holders to decide the future direction of the Tomo network including TomoChain infrastructure, TomoWallet and Tomo application.”

The TomoChain concept is still relatively new, getting its start a little more than a year ago. Back then the project was known as Tomoapp, but it was later rebranded as ReplyBlock. That social network app was focused on a Q&A format, but by the end of 2017, the firm was already preparing for its ICO.

The public sale and ICO were officially completed on February 3, and now that the ICO is complete, TomoChain is shifting its focus to product development. The company is also focused on developing strategic partnerships, and TomoChain has already enjoyed some early success. The team behind the startup talks about their existing and potential partnerships this way:

“Our first partner is BitLearn a revolutionary gamified learning ecosystem that utilizes BLB (BitLearn Tokens) and the blockchain to drive student success through positive skill acquisition and future savings . The second partner is Bigbom Eco – the decentralized advertising ecosystem – benefits everyone in online advertising, including advertisers, service providers, content publishers, advertising channels, and advertising platforms. Next partnership is with Binkabi — the decentralized commodity network for Emerging Markets today, Binkabi is a financial technology company that uses blockchain technology to solve problems in the agricultural value chain in developing countries. Tomochain recently signed the strategic alliance agreement with 0chain – a zero-cost superfast decentralized cloud for dApps on any blockchain. There are many amazing partners we wish to introduce in later time. Stay tuned and follow us on social media to keep updated from us.”

The team is also quick to point on their technological prowess, branding the firm as a technically innovative startup – one that has been designed from the ground up with security, transparency, and trustworthiness in mind. By creating a unique blockchain infrastructure, TomoChain hopes to upend the cryptocurrency market.

Speed is one of the selling points of the TomoChain experience. With two second confirmations and zero transaction fees, TomoChain is already besting many of its competitors. Ethereum, for instance, takes a full 17 seconds to clear a transaction, more than eight times as long as TomoChain.

As the company continues to grow, new partners are still coming on-board. In the first six weeks following the recently completed ICO, TomoChain had signed with four additional partners, and the firm has two apps built on its new platform. That is good news for the new startup, and the management team recognizes that fact. They put it this way:

“The adoption is a critical factor contributing to the project’s success which strongly proves the product is helpful and highly-recognized by the large community.”

The world of cryptocurrency continues to grow and with it the challenges these new forms of payment face. Scalability has long been an issue for Bitcoin, Ethereum, and other cryptocurrencies, but the team at TomoChain hopes to change all that.