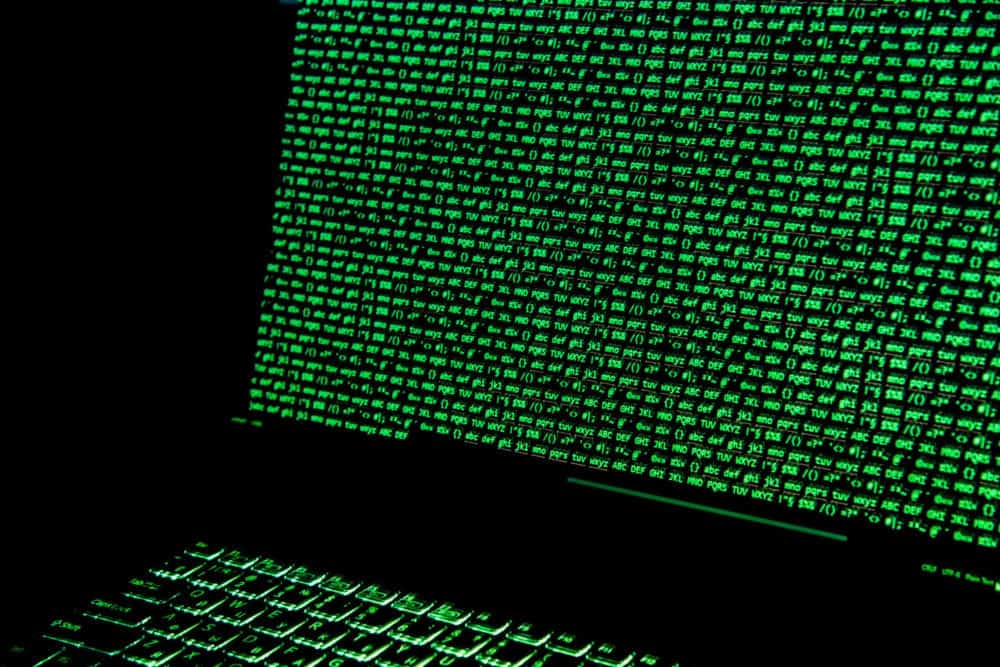 You’ve probably seen the recent headlines regarding the Coinhive mining script. It has been spotted on numerous websites and even dozens of apps in the Google Play store. While the Coinhive script is undoubtedly being abused, the term “malware” is not necessarily an accurate or fair description; it is merely a browser mining script. There could come a day when users are happy to allow access to a portion of their processing power while visiting a particular website, in exchange for an absence of intrusive ads. Malwarebytes recently labeled the script as malware much to the dismay of some.

A more fitting description for the more sinister usage of this script would be:

We decided to take a look at the current reach of the Coinhive script. Just how many websites are affected, and are there any commonalities between those sites?

As the Coinhive script is run from a centralized location, it’s rather easy to locate the sites that are using it, whether they are aware of the code or not. Sites running the script usually have the following code embedded in their website (along with some similar variants):

It would be safe to assume this estimate is on the low side also due to a few factors:

Note: The domains and metrics published in this post were collected on 10th November 2017. The specific websites which are running the Coinhive script and the metrics of these domains will change as time passes. We’ll aim to update this post periodically.

So now we have a nice list of affected domains, let’s parse some metrics. We’re going to extract the following information for each domain:

The only tool, in our eyes, for a such a job is A-Parser, a massively versatile parsing tool that can parse most of the metrics we need out of the box and is hugely customisable.

Here are some other sources we will use to collect our metrics:

After a quick test of our settings, we put A-Parser to work and began working on scripts for the non-supported metrics above.

Down the rabbit hole we go! The results from our parsing are displayed in the table below.

On looking into our data, one thing that becomes immediately apparent is that there are an abundance or .ir (Iranian) domains, all hosted on the same IP address, using the same PHP Framework, Laravel. 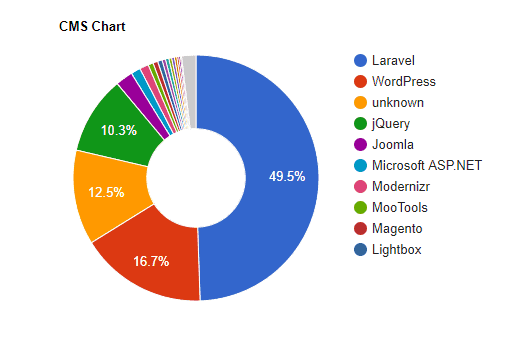 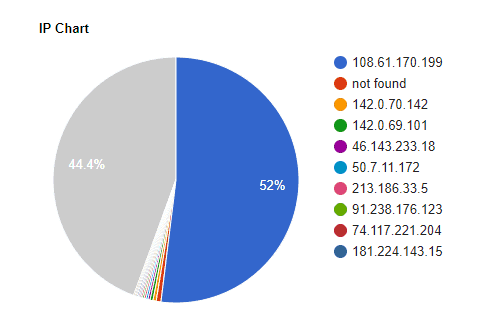 There are a couple of things to note at this point:

As you can see, these look like they’ve been registered using a simple script with 0-9 and a-z entries.

Here’s what the websites look like, those that we spot-checked were identical except for the domain name:

This is beginning to look less like hacked/exploited domains and more like something else! All of the domains are for sale and parked via dns4.ir, the WHOIS details of this website match the WHOIS for many of these domains.

Foul play is not apparent, but a few questions are indeed raised. Principally, how is someone profiting from registering 4,000+ domains, at around $25 each? The domains show no estimated search traffic, no inbound links, and very few show any social activity. Whether there is something ominous going on or this is simply an elaborate domain parking setup is currently unknown. We are leaning towards the idea that this is just monetization of parked domains, set up by a domainer.

We cleaned the .ir domains from our results and took another look at the data; we are now looking at 4,324 domains. 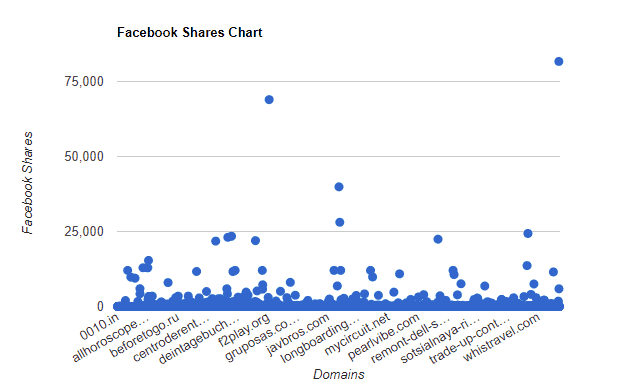 There are some domains with a significant number of Facebook shares, the majority under 5,000, and a large percentage of sites with none at all; 2,194 domains (50.7%.)

Two domains had values too large for our graph: 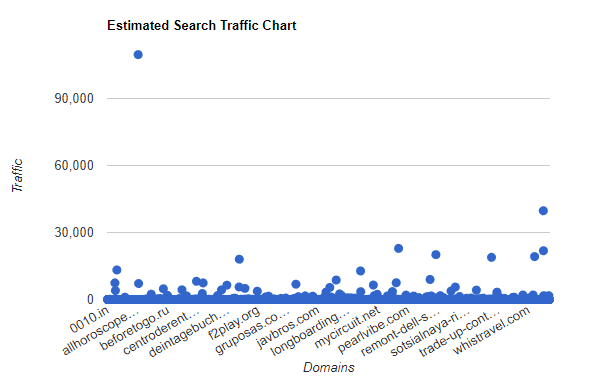 This chart displays domains estimated search traffic. As you can see, there are some domains with significant traffic. However, 3,636 domains (84.1%) have no predicted traffic at all. 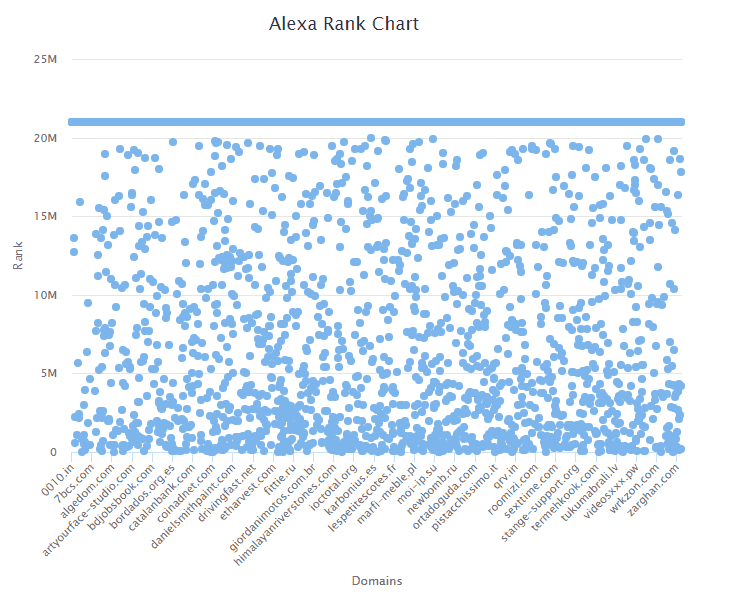 Where domains are actually scored, the Alexa Rank of the websites is quite evenly spread. There is a significant percentage of these domains with a score of under 5 million (the top 5 million websites in existence, according to Alexa). Again, however, a large percentage of domains had no ranking. We set these non-ranking domains to have a score of 21,000,000, so they can be visualized here (Alexa only scores the top 20 million websites). There are a total of 2,678 (61.9%) domains with no ranking. 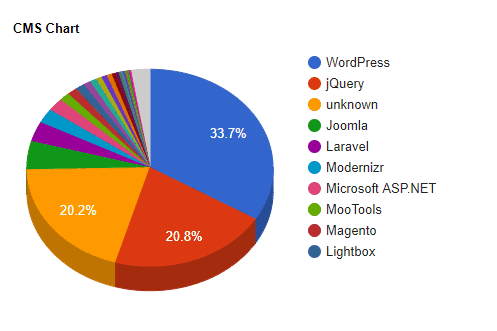 The largest number of domains are running WordPress, which is unsurprising, considering it’s one of the more popular in existence. It is, however, notorious for being regularly hacked.

At this point, it’s unclear whether these WordPress domains are compromised or not. To establish this would require further investigation. We could look into the WordPress versions in use and analyze individual sites to determine this, something we might tackle later. 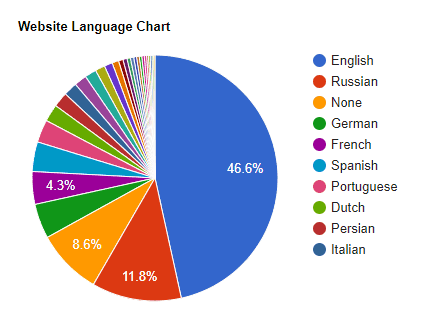 English is the main language in use, but there is a surprisingly high number of websites using Russian. This could be due to Russian webmasters being more versed on cryptocurrencies and the technology than your average webmaster.

The vast majority of websites are seen as safe by Google, with only 47 sites marked as unsafe. This goes to show that Google, for now, is not treating the Coinhive script as malware. 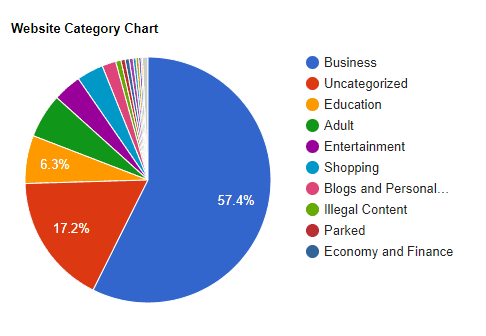 57.4% of the websites are categorized as business sites. We’ve checked some of these sites and feel that this category is a somewhat broad, so the data here is not of much use. A fair number of adult websites also appear to be utilizing the script, perhaps doing their best not to interrupt(!) their visitors with ads, or using Coinhive as an additional income stream.

The SEO metrics we used are TF (Trust Flow) and CF (Citation Flow) from Majestic. These are both scored on a scale between 0-100. To summarize these two metrics: 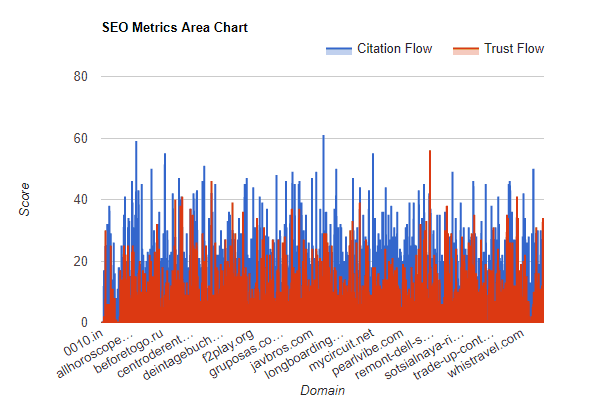 The sites which have scored higher than 0 appear to have a relatively even distribution of scores from Majestic. To break down these two metrics further we’ve also created some line charts: 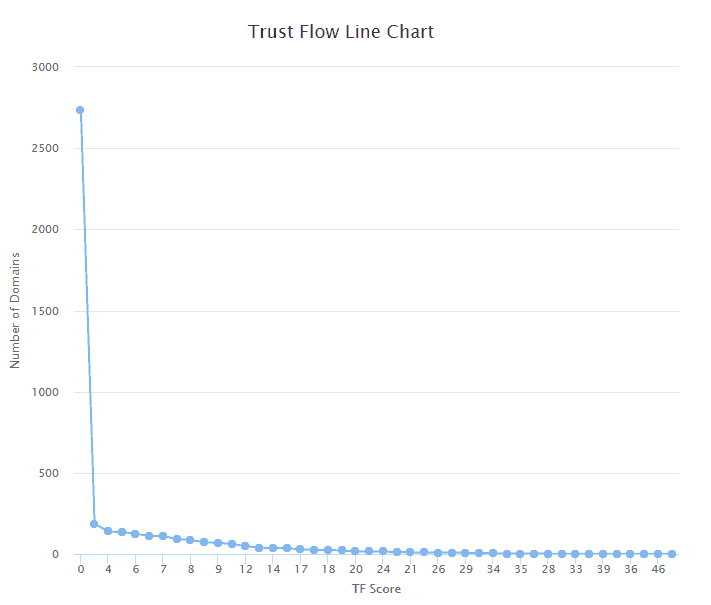 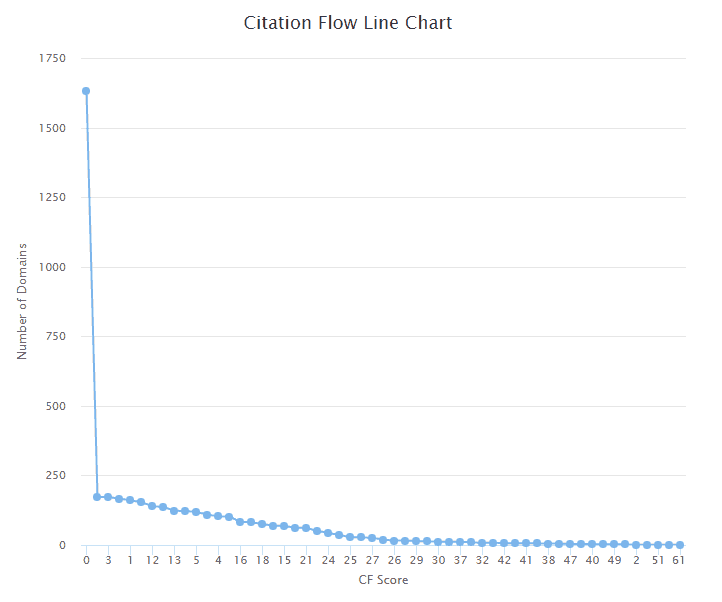 As you can see, the majority of the sites have a score 0, with far more sites scoring on the lower end of the scale. 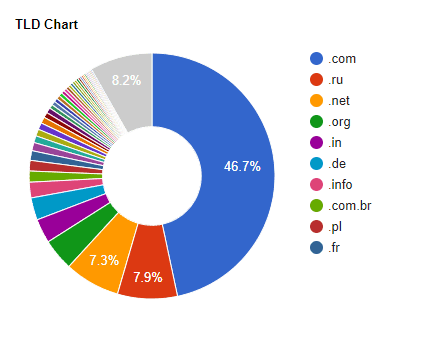 There is a total of 2,936 IP addresses in our data. We can further analyze if specific IP addresses are hosting multiple affected domains below: 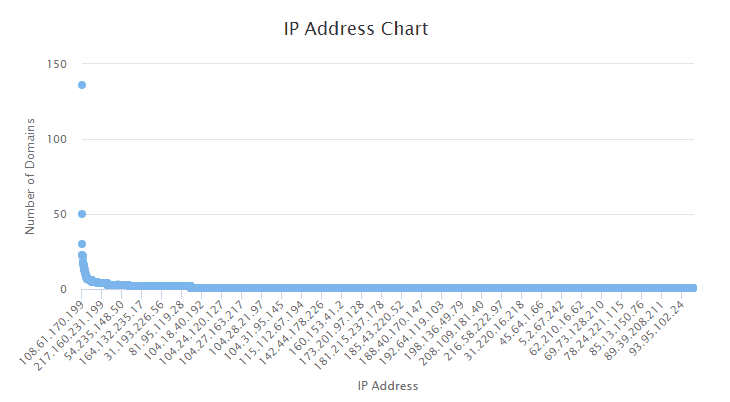 As revealed in the chart, some IP addresses are hosting many websites. We can see that the owner of the .ir domains, using the IP 108.61.170.199, still has some domains in our data hosted on different TLDs.

The other IPs which host the script on multiple domains could be explained by one of the following: 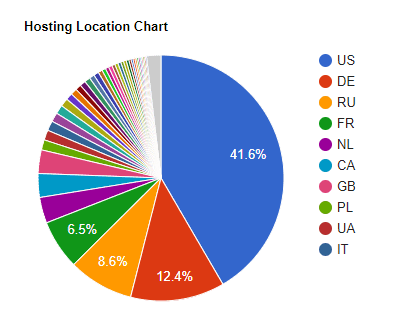 The majority of sites running the Coinhive script are hosted in the US, with Germany and Russia having notable numbers also.

A seemingly popular online lingerie store for French customers. First added to the Wayback Machine in April 2013 with the same physical store address on the site as they have currently.

This website appears to be the main for a Brazilian Musician, “Vintage Culture.” Apart from the Coinhive script, the site appears to be functioning correctly. It is hard to determine whether this site is running the script for profit or if the script has been placed maliciously.

Interestingly, Google’s platform, Blogger/Blogspot, has multiple subdomains which are running the coinhive script. It appears that users can reference external Javascript, so they are able to create “spammy” blogs on the Google platform and use the Coinhive script to monetize them.

Pirate Bay is openly using the coinhive script as a method of monetization. It would be safe to assume that the same can be said about the other file sharing websites which we found.

We’re unable to confirm whether this was placed maliciously, although, you’d think any website running on the government servers should be adequately secured. You have to wonder whether the Argentinian government is profiting from running Coinhive.

A shocking number of educational institutions have the coinhive script present on their websites. Again, it’s hard to determine whether these websites are doing so knowingly. Any user visiting these sites running Malwarebytes Pro would see a popup notification showing that the script was blocked, so you would think this would have been reported by now.

This GitHub subdomain is redirecting to an “infected domain.” The user has set up a subdomain on GitHub and rather than placing the code directly, has redirected the GitHub site to a domain they control. This domain has the coinhive code present.

Some key points to take away from our analysis are as follows:

As additional browser mining options become available, we are likely to see more and more websites utilizing scripts to monetize their users in the background and more hackers inserting the code into compromised sites. Some companies, such as NIMIQ, are currently developing browser specific cryptocurrencies.

Hackers and bad actors usually opt for the most anonymous form of income streams on hacked sites. This can be Affiliate Networks that ask no questions or dodgy SEO networks that will pay for backlinks on hacked sites. The ability to mine anonymously using compromised websites will be a reasonable option for hackers looking for untraceable payment for their crimes and webmasters looking to squeeze more income out of their sites.

Like cryptocurrency or the internet, the fact that browser mining can be exploited or used in sinister ways does not mean they shouldn’t exist. We should keep open minds and have constructive discussions about the future browser mining.