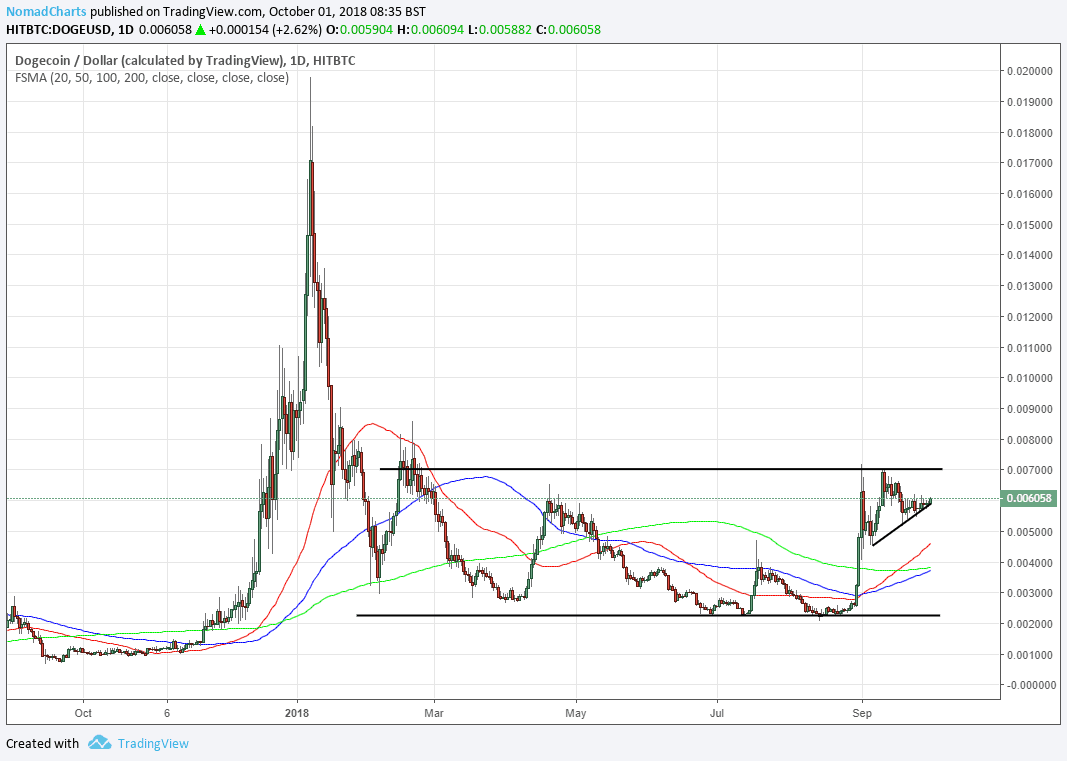 While the market as a whole may be waiting for Bitcoin to make a move from its current low volatility state, there have still been some individual cases of cryptos making strong bullish moves during this quiet period.

XRP and Dogecoin are two great examples. XRP has made an impressive 119% gain over the last two weeks, even spiking to a 195% gain briefly on September 21st. Similarly, DOGE is currently up more than 130% since the end of August, while briefly spiking to a 180% gain on September 1st.

If Bitcoin does have a bullish run, this will likely result in bullish price action across the crypto market, but even so, there will still be the market leaders and the laggards. And we must also take into consideration that Bitcoin may continue to fall much lower from here.

But right now as we stand, XRP and DOGE are showing the characteristics of market leaders. They both have displayed great relative strength – even bullish behavior – during this bearish/quiet period of the market. Both are well-established cryptocurrencies with real-world uses, enthusiastic followers and market caps among the top 20.

This makes both these coins serious candidates for any cryptocurrency portfolio. Whether the cryptocurrency market as a whole goes up or down from here, market leaders tend to be top performers during bullish phases and hold up well during bearish phases.

Let’s take a look at the charts of both these coins analyze their price behavior:

Dogecoin looks to have built a flat-base/cup-with-handle type pattern. A breakout from its current ‘handle’ consolidation is possible and could take the price up to resistance at $0.007. If DOGE can break above major resistance at $0.007 prices could go much higher, with $0.0086/$0.009 being an initial target or resistance area.

DOGE is one of the few cryptocurrencies trading above its 200-day moving average, a long-term trend indicator. DOGE has also held onto its recent gains showing great relative strength and that its bullish move was not just a pump and dump or one day wonder.

XRP made a powerful move recently breaking through a descending trendline and its 50, 100 and 200-day moving averages. Most importantly, like DOGE, XRP has managed to hold onto its gains so far and is currently consolidating in a flag-like pattern.

XRP may need to consolidate a bit longer in this flag pattern, but if it can hold, and eventually break out, prices could move up to the $0.7-$0.8 area initially. The next resistance area/target after that will be the $0.9-$1 area if the bullish price action continues.