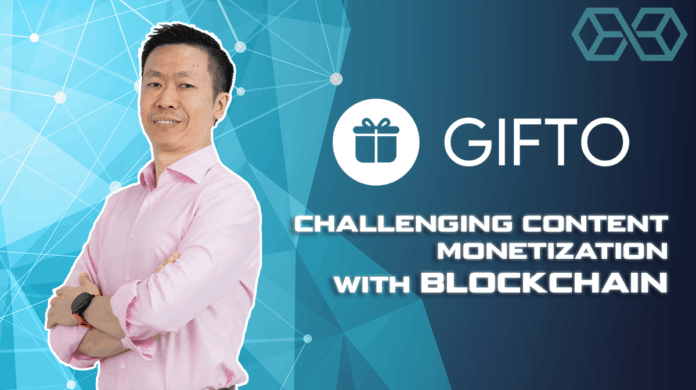 Live streaming services, where content creators can broadcast their talents to a worldwide live audience, have taken social media by storm in recent years. By 2022, it’s expected that up to 82% of all internet traffic will be video-based, most of which will be live-streamed content.

In Asia, the popularity of live-streaming services is sky-high. User demand for live-streaming platforms is expected to grow the industry to over US$71 billion by 2023 in the Asian markets alone.

Despite this, monetizing live streaming services has remained particularly problematic, especially when attempting to make payments fair and transparent for content creators.

Blokt caught up with Andy Tian who is the CEO of Gifto and Asia Innovations Group, a blockchain project that is challenging current content creation monetization models, to discuss what makes virtual gifting such a unique value proposition, and find out Gifto’s vision for the future.

Established in Taiwan in 2017, Gifto is a decentralized virtual gifting protocol, which incentivizes its users to buy and send gifts to content creators worldwide. By building a large pool of content creators, Gifto aims to be the world’s most widely-used application token.

Gifto is accomplishing this by making it fun and simple for mainstream internet users to acquire and use GTO, the native token of the Gifto platform, in popular social and streaming apps; especially to reward content creators through virtual and e-commerce gifts.

On what makes the Gifto unique, Tian explains:

“We’re different from most projects in that we’re backed by the Asia Innovations Group, the company behind Uplive, a global live streaming platform with over 100 million users, so we already have the user base to drive mass adoption with.”

Gifto aims to take the current gifting model within its popular live streaming partner app Uplive, and implement it across platforms globally, including on huge industry giants like Instagram, YouTube, and Snapchat.

Although there are currently ways for online creatives and talented content creators to monetize their content online, Gifto believes that most current models of content monetization are flawed.

Of Regarding the current monetization models, Tian comments:

“Simply put, it’s impossible for most content creators, even fairly popular ones, to make a consistent living from their outstanding shared content.”

Instead, Tian explains, most content creators are heavily dependent on view-based advertising revenue from streaming platforms such as YouTube. As these platforms reward content creators with the largest audiences in a merit-based system, the algorithms which dictate monetization make it very difficult for creatives who are just starting out.

“Gifto’s virtual gifting in UpLive not only rewards content creators, but deepens the connection between fans and creatives, by making gifting fun and memorable.”

So, what is virtual gifting with Gifto, and how exactly does it differ from traditional content monetization?

The Gifto token (GTO) is the native token of the Gifto Protocol, and features especially highly within the Gifto Wallet, a user-friendly web wallet integrated into Uplive, Gifto’s Universal Gifting protocol, the Giftomon blockchain collectibles game, and the CoinUP Network.

Explaining how Gifto works on the Uplive platform, Tian says:

“Users can send an animation to their favorite broadcaster, and the content creator will receive 80% of the cost of the animated gift deposited directly to their Gifto wallet, in the form of Gifto tokens.”

As blockchain based Gifto transactions incur lower fees than the pre-existing virtual currency of Uplive, called ‘uDiamonds,’ it has been successfully integrated as a superior transfer of value from the audience to the broadcaster.

The Gifto token is currently listed on major crypto exchanges such as Binance, Bittrex, OKEx, Bithumb, UpBit and more.

Virtual Gifts are essentially tokens of appreciation, sent to support artists and content creators for their work. Instead of creators asking for donations, or trying to monetize their channels through adverts as is currently common, creatives can instead use Gifto’s virtual gifts to receive tangible value for their content.

Virtual gifts come in many shapes and sizes, and also – many values. Users can buy virtual gifts, and send them to their favorite content creators.

Gifts include animated virtual gifts, 3D gifts, or gifts which have a special theme. Eventually, the Gifto wallet will also support the gifting of virtually anything that can be gifted online, for example, gift cards, or limited-edition digital collectibles.

Most importantly, with blockchain technology integration, virtual gifts have intrinsic value as non-fungible assets, tied to the value of the Gifto token.

Content creators can then view their virtual gifts including the fan who sent them, and if they choose, turn the gifts into Gifto tokens to trade on secondary markets. Through the Gifto Wallet, creators can spend their GTO from gifts on entertainment apps, or real products via Gifto’s e-commerce plugin, which is currently being tested for Taiwanese users.

Commenting on the viability of the virtual gifting business model, Tian adds:

“Virtual gifting is a proven business model popular in live streaming. Uplive brought in over $122 million during 2018, mostly from tens of millions of virtual items gifted by Uplive users to streamers each month.”

Tian also added that virtual gifting is more than just a form of monetization, it’s fun too – as users aren’t just giving money, but personalized gifts.

Asked how Gifto will integrate with existing platforms, Tian explains:

“Our virtual gifting is powered by the Gifto wallet, which is web-based and works across platforms. Content creators simply send a link to their Gift Dashboard to receive gifts, regardless of platform.”

Tian added that Gifto is constantly exploring ways to make gifting easier for users, including by adding more fiat top-up options for its users.

Giftomon is another element of the Gifto protocol, and was the first cryptocurrency based online collectibles game, reaching several thousand daily average users.

Giftomon allows users to spend GTO to train Giftomon creatures and compete in battles to acquire more GTOs, which has proven to be a successful proof of concept for GTO holders to develop their holdings while testing the network.

“Becoming one of the first highly engaging games for the crypto-community taught us a lot about what users really want out of blockchain in their games, and Giftomon will benefit from further development of the Gifto Wallet and our collectibles infrastructure”

Gifto’s Outlook for the Future

Moving forward, Gifto has a detailed roadmap for the future and a positive view of the wider blockchain industry.

Commenting on the crypto bear-market through most of 2018, Tian says:

“Overall we’re happy to see that a lot of the noise has died down as crypto markets have gone through a correction, with real projects deployed and usable tech, such as the Gifto Wallet, getting more of the attention.”

Tian continues that despite this, some of the major challenges for the widespread adoption of cryptos, such as regulatory issues or risk aversion by payment gateways, remain major barriers for new capital and new users entering crypto among many jurisdictions.

“Like many projects, this has impacted our roadmap, but we are pioneers and see several paths forward for mainstream adoption. For example, we expect our strategic partnership with InfiniteX Exchange in Australia will open up new fiat-to-Gifto gateways for mainstream users.”

Gifto believes that by facilitating the easy purchase of crypto for everyone, it can drive adoption, and make it easier for content creators and fans to send and receive unique gifts.