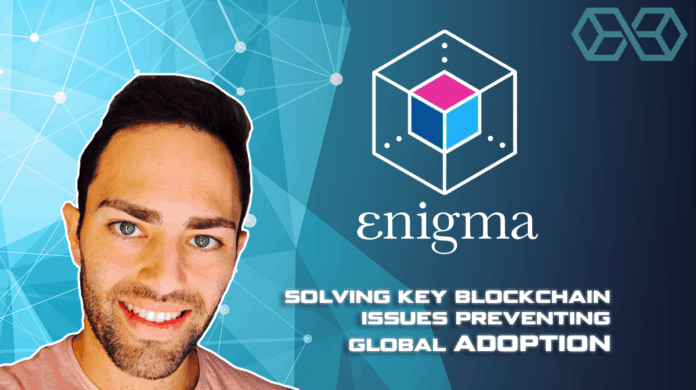 Although blockchains are offering disruption to the way we store and distribute assets and data, they are fundamentally bad at privacy – as the very same technology which makes them open and auditable, allows tracking of potentially confidential transactions.

As a result, many in the blockchain industry believe a solution is needed for encrypted computations to make blockchain data more private – and the Enigma project has the solution.

Blokt interviewed Tor Bair, Head of Enigma Growth and Marketing, to find out how the Enigma protocol is changing privacy for the decentralized web.

Founded in 2015, Enigma is a permissionless public network, building a decentralized network for secure, privacy-preserving computations.

Enigma currently has a 14 strong core team, with top talent from MIT and an expert panel of advisors.

Explaining why privacy-preserving technology is needed for blockchain, Bair explains:

“Blockchains are actually bad at privacy by design. Public blockchains are distributed ledgers where entries are auditable and permissionless. Anyone can attempt to record an entry, and anyone can read the entries themselves.”

While this is a hugely valuable feature for auditability and transparency, Bair remarks that it’s not enough for the blockchains of the future, which are working towards the creation of a decentralized, permissionless, and open version of the web.

Instead, with Enigma, the team is building a decentralized internet which doesn’t rely on centralized solutions for computation or expose sensitive data publicly. This means that the Enigma network can perform computations over encrypted data, without nodes in the network ever seeing the raw data.

Encrypted data computation allows blockchains and other decentralized applications to work with private and sensitive data, unlocking powerful use cases and valuable new opportunities. Without solutions like Enigma, Bair explains, the applications for blockchain are actually quite limited.

Enigma is currently preparing for a new release, called Discovery, which it says will bring a number of massive improvements to the Enigma protocol.

In a recent Enigma protocol blog post dated 2nd April, the Enigma team announced the imminent launch of the Discovery testnet, alongside the release of a suite of tools designed to assist developers in building on top of the Discovery network.

Sharing the functionality of the Discovery network, Bair remarks:

“Discovery is the first networked version of our protocol to be released. It introduces ‘secret nodes’, the worker nodes in our network that perform private computations.”

Likewise, Discovery’s release will also allow for private inputs and outputs, it introduces a “secret state” and a storage layer, and finally, Discovery will decouple “secret contracts” on Enigma from Ethereum’s smart contracts.

Enigma’s secret contracts are privacy-preserving smart contracts – essentially, code which can be run on Enigma’s decentralized network while preserving the privacy of input data.

Secret contracts on Enigma are written in the Rust programming language, one of the most popular languages among developers, with its own fast-growing global community.

Commenting on the current limitations of smart contracts, Bair says:

“Today, smart contracts, such as those on Ethereum, require centralized solutions for data processing or require data to be exposed publicly on the blockchain.”

Instead, Enigma’s secret contract technology provides a decentralized solution for processing data, while keeping it encrypted and secure.

Secure computation is, in short, the execution of a transaction or mathematical problem, without revealing the subject’s data. An example of this is the “Millionaires problem,” where two high net worth individuals wish to compare their wealth with each other, without revealing the actual value of their assets.

“Only very recently has anyone thought to, or been able to, integrate secure computation technologies with blockchains. That is our core concept. Guy Zyskind, the Enigma CEO, was the first to propose this architecture in his groundbreaking MIT papers, which now have over 700 combined academic citations.”

Enigma’s work is now focussed on making secure computation feasible at scale – and it believes it will revolutionize the internet and industry if it succeeds.

Last June, Enigma announced its collaboration with Intel, focusing on research and development efforts to advance the development of privacy-preserving computation technologies.

Expanding on the nature of Enigma and Intel’s collaboration, Bair shares:

“We currently use Intel Software Guard Extensions, termed SGX, as a hardware-based privacy solution in our Discovery protocol, and we work directly with Intel’s SGX team to improve the performance of SGX in our protocol and explore its use with public blockchains.”

The partnership stems from Intel and Enigma’s shared goal of solving the most significant challenges in blockchain today, namely privacy, security, and scalability issues.

Likewise, nodes that operate within the Enigma network must stake ENG to be able to run computations. The more tokens a secret node stakes, the more likely it is to be selected to work on the next secret contract.

Therefore, it is beneficial for node operators to acquire and stake ENG tokens, to increase their chance of running secret contracts and earning a return on their stake.

Despite currently running on Ethereum, and using the ERC-20 token configuration for ENG, Enigma is designed to be a blockchain-agnostic protocol, meaning any blockchain could theoretically be used as its validation layer.

To remain blockchain-agnostic, Enigma has moved away from relying on Ethereum as a p2p layer, and instead built its own p2p protocol for Enigma.

“We currently use Ethereum because of the security properties of its blockchain and its massive developer community. Designing our own p2p protocol was a huge and complex task but an essential one for preserving the value of Enigma and our flexibility. We designed Enigma from scratch – it’s been an incredibly ambitious project from the start, and not like any other in the space.”

In the future, Enigma has detailed that its future protocol will move to its own, scalable blockchain, rolled out in gradual phases.

In August 2018, Enigma announced 8 launch partners who would be implementing Enigma’s privacy-preserving capabilities into their projects, including the Ocean Protocol, a decentralized ecosystem for AI data consumption; Datawallet, a decentralized consumer to business data exchange; and Colendi, a decentralized credit scoring protocol.

On the development of the Enigma protocol alongside these partners, Bair shared:

“We’ve learned a lot from all of our partners, both announced and unannounced. We’re constantly talking with projects who could use our privacy and scalability solutions to improve their own products and networks. Every time we speak with a partner we learn something new and valuable about their use case or their industry.”

To stay ahead of shifting needs in the fast-moving blockchain industry, and accommodate its partner’s requirements, Enigma has focused on usability as a core value for the project, and as such is constantly converting its strong relationships into real, usable code.

“There’s a lot of brilliant people working in this space – Enigma are trying to help them succeed!”

Enigma also has plans to attract development talent on to the Enigma protocol to coincide with the release of the Discovery testnet.

“We’re about to release a new version of Discovery for developers! Our code is already open-source, and we’re packaging things and finalizing documentation so that developers can start building their own secret contracts.”

Likewise, Enigma will soon deploy Discovery on the Ethereum testnet, followed by a mainnet deployment, and Enigma has produced a detailed blog series on secret nodes for the first developers looking to run their own node.

“Enigma will also be running something called the Genesis Game, where up to fifty nodes will be selected as initial mainnet “genesis” nodes based on their support of our network during the testnet period. It’s a very exciting opportunity – developers should check it out!”

Enigma has high hopes for the remainder of this year, recently stating through its blog that 2019 will be “the year of Enigma.”

“Everything for us has been building up to this Discovery release, but it’s just the first step towards future iterations of our protocol. We’re building Enigma to be the most powerful platform for generalized secure computation.”

Throughout 2019, Enigma intends to keep researching other types of privacy solutions, including secure multiparty computation, while improving the performance of its current release.

Reflecting on the road ahead, Bair remarks:

“The biggest challenge is that none of this has ever been attempted by anyone – but that’s also our greatest excitement! And if it excites you too, please join our community. We’d love to have you be a part of Enigma.”

Enigma has one of the most exciting projects in the blockchain space, and Blokt would like to thank Tor Bair and the rest of the Enigma team for sharing their vision.

More information about Enigma can be found at any of the following channels: