[OPINION] Twelve months ago the Ethereum price was under $10. That might be hard to wrap your head around. For a lot of people who invested in the summer, Ethereum has yet to return to the highs it achieved back then. However, zooming out on the charts it is clear that Ethereum has gained a consistent upward support against the dollar over the last 12 months. The big question is ‘Where is Ethereum going now?’ 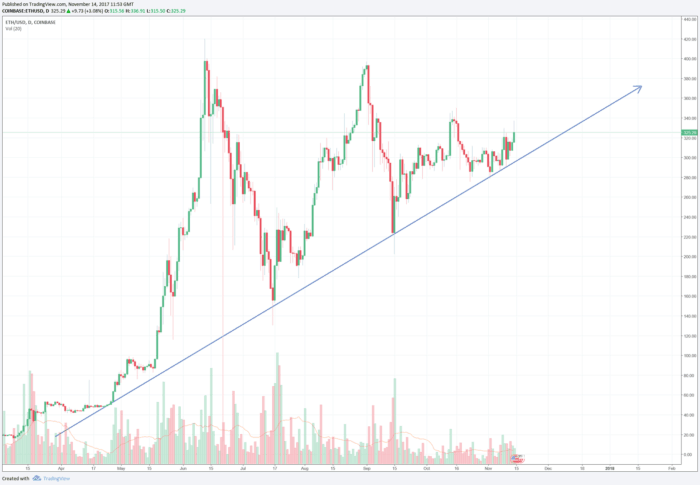 Taking a step back, the Crypto markets have largely been shaken by the latest fad. Volume is often shifted liberally based on current trends with buyers looking for the next greatest opportunity to make money, forks being the main driver for these moves. Bitcoin Cash is one such fork, claiming that its fundamentals are in fact better than Bitcoin itself. For the most part it’s hard to argue this, it’s faster and has a lower transaction cost. Vitalik himself on Twitter praised the success of BCH, a move that the community seems very positive towards, for good reason.

Bitcoin Cash has served to remind us all that in the long term fundamentals of a coin are important. 12 months after Ethereum was $10 it is important to remember that Ethereum got to its current price of $330 on solid fundamentals, all of which have grown stronger with every passing month. More Ethereum Alliance members get added regularly, and last month an update to the core improved vastly on an already solid foundation.

Bitcoin Cash, for a small moment in time, overtook Ethereum’s market cap. This proved to be extremely short-lived, perhaps because the market asked itself the same question that drove BCH’s price rise in the first place, ‘Which coin has the best fundamentals and growth potential?’

Ethereum looks set for another well-deserved shot in the arm and Bitcoin Cash has proven that the volume potential is there, volume that was driven primarily by fundamentals; something that has taken a back seat to the forks of Bitcoin over the last few months. What is your price Target for Ethereum this month?