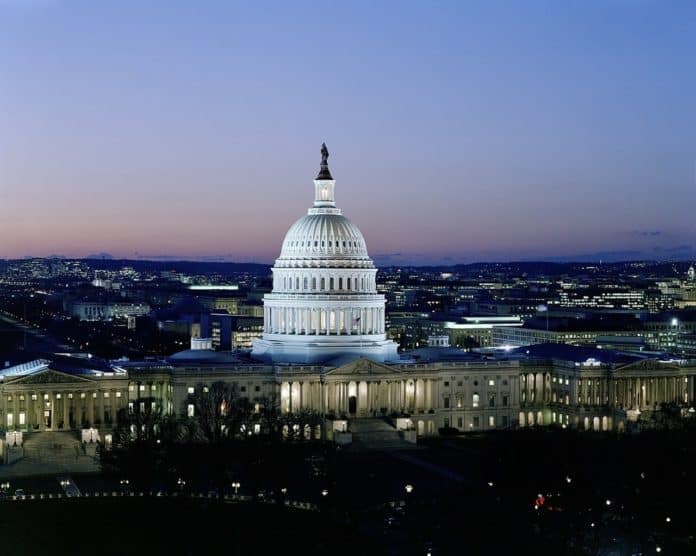 The Joint Economic Committee Congress of the United States of America, issued last March the 2018 Joint Economic report. Under its Chapter 9, “Building a secure future one Blockchain at a time” the document recounts the emergence of the technology, and the stratospheric, four-digit appreciation in value, the four biggest cryptocurrencies in terms of market capitalization (Bitcoin, Ether, Ripple and Litecoin) underwent.

The report highlights the economic benefits of tackling cybercrime and better-securing networks, infrastructures, and users data while suggesting Blockchain Technology as the best fit for the task. Blockchain is praised as “not only nearly invulnerable to cyberattacks,” but “revolutionizing the way the world conducts commerce and shares information.”

2017, the Year of Cryptocurrencies

The report lists cryptocurrencies emergence as one of the most significant economic events in 2017. In fact, it calls to mind that Bitcoin was the second most googled word in 2017 and that it had made several headlines as a global news topic. The surge in search volume was found to be consistent with a surge in prices, where most digital assets skyrocketed in value, especially during the last Quarter of 2017. The report underlines how cryptocurrencies’ great performance dwarfed the stock market’s yet solid growth, and compares the buzz around cryptocurrencies, to the excitement that surrounded the internet in the early 1990s.

The report briefly explains Blockchain as the technology underlying digital currencies like Bitcoin. In contrast with the conventional architecture of having central recording and storage for data or transaction settlements, Blockchain creates thousands of identical ledgers in computers and servers all over the world as mentioned in this section. The explanation goes on to decipher the idea behind the permissionless Proof-of-Work algorithm, its incentive and competitive reward model for miners. The rest of the section lists the main differences and use cases of both Bitcoin and Ethereum Blockchains, their respective block reward amounts and creation times, and the purpose behind each project.

This section identifies the main function that a real currency should serve as, namely a medium of exchange, a unit of account and a store of value. It concludes that at this point, prominent economist and financial experts do not believe that cryptocurrencies fit the standard definition of money. Citing Bitcoin as an example, the report enumerates the reasons of such claim, as cryptocurrencies’ extreme volatility, technical and economical limitations, limited scalability by design, and significantly low transaction processing time as compared with existing and well-positioned market players like Visa or MasterCard. The report recalls that Ethereum has experienced scalability related issues similar to Bitcoin’s before undergoing a structured upgrade in late 2017, which substantially improved its processing time.

This section discusses the new market formed around Blockchain based startups, called Initial Coin Offerings, ICOs. It defines it as a means of raising capital through issuing tokens to be used in exchange for services or goods offered by a given company. Through an example, the document went on to explain that the token would be exchanged on a peer-to-peer basis without any recourse to outside payment systems such as PayPal or Visa for transactions processing. The concept of building and enforcing a Smart Contract is also explained in the section. ICOs are praised as equity preserving, less Costly than Initial Public Offerings, and offering the advantage of bootstrapping fundraising for future upgrade and maintenance, through transaction fees, token appreciation, and donations. The last part of this section depicts the explosion of capital that flew into the ICO market in 2017, while briefly invoking the infamous DAO hack. It concludes that as with most startup projects, most Blockchain based ventures will fail and that the ones that will survive, “could transform the way the internet and technology works for decades to come.”

The report hints that many governments and big corporation are testing Blockchain for various use cases beyond just the financial layer. As an example of the application in the Health Care realm, the report claims that Blockchain could provide a secure way to store medical records digitally. The report also mentions the joint efforts between health care providers and regulatory bodies in the US in order to develop encryption standards that would protect Americans private medical records. Other application such as supply chain and electric grid management were discussed and deemed revolutionary.

The report points out that even though no Blockchain had been successfully hacked to date, the risk of theft persistently exists and is more associated with accessing ones digital wallet. The Mt.Gox exchange debacle was evoked, where the report emphasizes that users should always remember that they are putting their trust in the security of exchanges, “in a manner similar to depositors in early banks.”

Using Bitcoin to acquire prohibited substances and unlawful services was covered. The report recalls the Silk Road online marketplace for example, where illegal transactions occurred for months before its shutdown. The report enquires into the “bubble concern” and the “irrational exuberance” that may have driven digital currencies’ prices way out of bound at some point. Long Island Iced Tea case, where the company misleadingly changed its name to Long Blockchain Corporation just to see its stock price skyrocket was discussed as an anecdote that should warn investors from money grab schemes and fraudulent maneuvers.

Under this section, the report distinguishes between securities regulation, money transmission laws, taxation definition and possible future regulatory actions in order to build a structured and transparent regulatory framework that may limit abuse and help Blockchain based projects prosper.

The report suggests that most ICOs should have fallen under the securities definition, as claimed by the Securities and Exchange Commission, SEC, based on the Howey test. The reports indicate that following the DAO incident, the SEC has promised to pursue more enforcement against new tokens for both securities registration issues and fraud.

The different taxation scenarios of cryptocurrencies investment gains as defined by the IRS were discussed and compared to foreign currency taxation rules. The report concludes that more clarification should follow on the way digital assets should be regarded by the law, in order to better address confusion among taxpayers. Regarding cryptocurrency transmission, the report explains that being global, cryptocurrencies and tokens can circumvent state regulations and licensure regimes and that a rigorous cost-benefit analysis should be performed to design a suitable policy.

The report concludes that for cryptocurrencies and Blockchain to thrive, flexible, collaborative, and innovative solutions should be found to avoid constrictive regulations that may harm this emerging technology and hinder it “from reaching its full potential.”