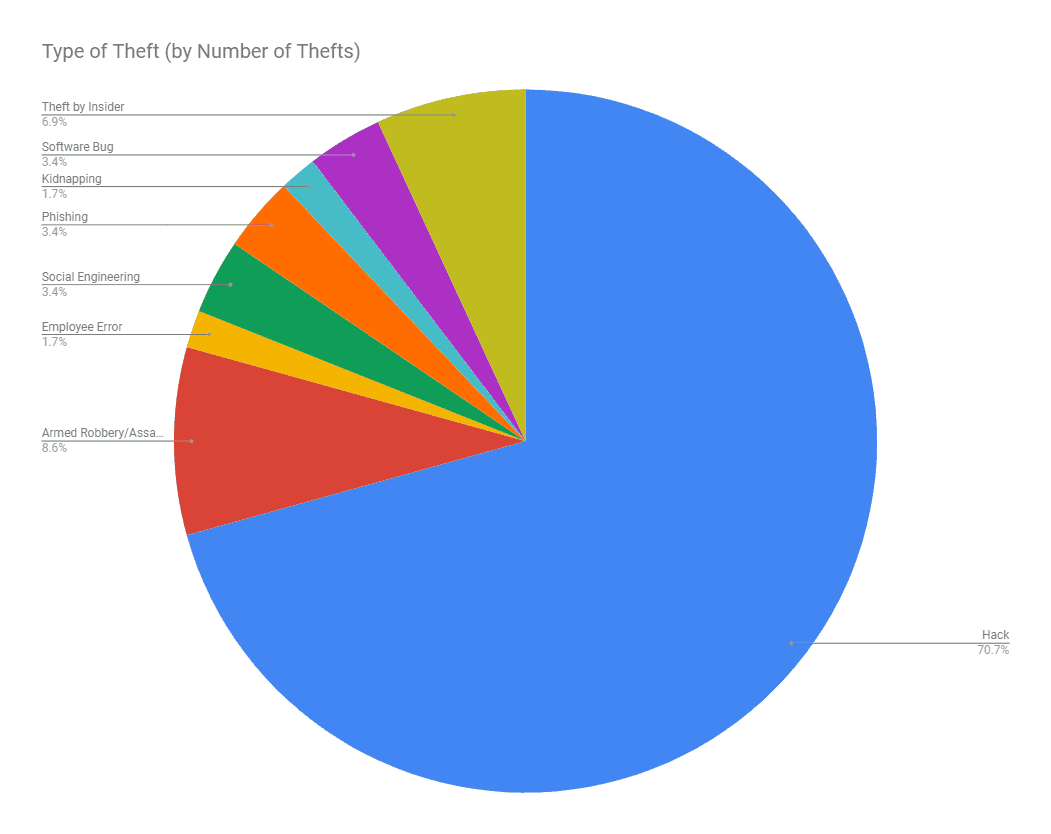 Many reports have cited the numerous cryptocurrency thefts over the past few years, but now the number of stolen cryptocurrencies in relation to their total issued circulation has been put into a league table. Greg Adams, Managing Director of blokt.com, a blockchain and cryptocurrency news publication, accepted the challenge from Nick Ogden, the founder of ClearBank®, to collate the data relating to cryptocurrency theft.

The data reveals that over 6% of the circulating supply of Bitcoin has been stolen at some point in time. Other coins fair even worse, such as NANO, which touts itself as a “fast and free way to pay for everything,” having an excess of 12% of its total supply stolen.

“The data is staggering and should serve as a wake-up call to those parties in the sector who are handling significant amounts of crypto. It is clear that the vast majority of funds are stolen from exchanges via hacks. The industry is beginning to mature, and there is no excuse for bad security practices on the part of exchanges. Users need to be extremely vigilant concerning the exchanges they do business with and should never allow an exchange to hold their coins when not actively trading. Hardware wallets are an absolute must for serious cryptocurrency users or investors.”

Exchanges in the Crosshairs

The data reveals that almost 60% of all funds stolen are taken from cryptocurrency exchanges, with 70% of the funds stolen via hacks. The second most common form of theft is armed robbery, which suggests users themselves need to be security conscious, particularly if they admit publicly they hold or invest in cryptocurrencies.

“At every conference, we hear about cryptocurrency and the risks and rewards, and it struck me that to be able to gauge the level of crypto coinage in circulation that had been stolen and compare that to the equivalent in Fiat currency would be interesting. Greg rose to the challenge and our league table has been produced – the results show a challenging picture. Over the next few months, we will track this to see if any trends emerge, but the information is very useful for Banks looking at the risks associated with providing fiat banking services to crypto exchanges and ICO activities.”

Ogden shared the information in the table with The Bank of England last week.

Adams suggests that the big picture might be much worse than the data reveals, stating:

“While our data is useful, it is somewhat incomplete. Many cryptocurrency hacks and thefts would go unreported by the media. Users likely report the theft to their local police or simply write off the loss without informing the media. There’s no way to know exactly how much cryptocurrency has been stolen, but it’s safe to assume that the amounts involved are far more than the data shows.”