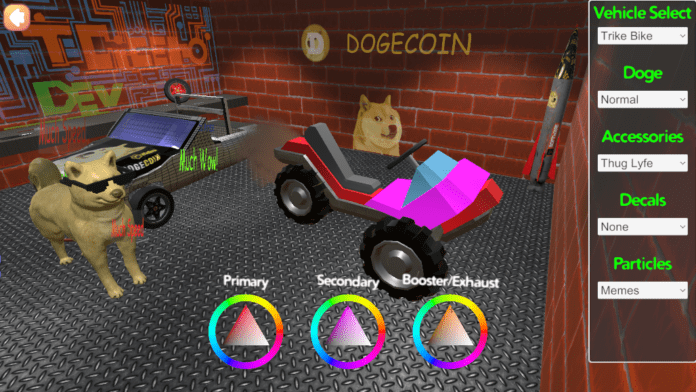 Doge Racer, an indie game inspired by the Dogecoin community, has just released its version 1.17 alpha. The game can now also be purchased using the Dogecoin (DOGE) cryptocurrency.

Contents hide
1 What Is Doge Racer?
2 What Changes Does the New Update Bring?
2.1 Related Articles:
3 Buying Doge Racer With Doge
4 Other Developments in the Dogecoin Community
5 Dogecoin.com Ownership Transferred to Developers

What Is Doge Racer?

Doge Racer is a video game created by the developer Anthony Cicero, who runs TCiceroDev.com. Doge Racer has previously been described as the ‘Mario Kart’ of Dogecoin, with its similar gameplay style.

Each racing car is driven by a Shiba Inu dog (the Dogecoin mascot), and other Dogecoin related graphics feature heavily throughout the game. Some of the main features of the game include Story Mode, Split-screen Multiplayer, Online Mode, Vehicle Customization, and more.

What Changes Does the New Update Bring?

Aside from being able to buy the game using Dogecoin, v1.17 has also brought along with it a number of other changes. An early version of Doge Racer VR (virtual reality) is now available, and there is a new login system, as well as Dogecoin tire customization.

The ‘Dogecoin Mine’ course and the ‘Crypto Highway’ have been re-added with lots of changes, a respawn button has been added, and many bugs have been fixed.

To purchase the game using Dogecoin, players will first need to create an account at http://www.tcicerodev.com/TCDNET/register.php. Then once logged in to the site, the option is available to purchase using Dogecoin. All Dogecoin payments are handled through Coin Payments.

A limited time offer currently stands at 1000 DOGE (about $2.20 at today’s exchange rate) to buy the full version.

Doge Racer also has a Patreon page for those who want to support its development and gain early access to future versions.

Other Developments in the Dogecoin Community

Dogecoin released its version 1.14 in June this year. The Dogecoin Developers Twitter account recently stated that there was 40% adoption of this new version, and encouraged those using the older version to upgrade.

The update has brought with it some performance improvements, new features, bug fixes, and updated translations for Dogecoin. The Dogecoin v1.14 release notes state:

“Validation speed and network propagation performance have been greatly improved, leading to much shorter sync and initial block download times.“

Ownership of the Dogecoin.com domain has now been handed over to the lead Dogecoin Developer, Ross Nicoll. The website was created by Jackson Palmer and Billy Markus, who were the original founders of Dogecoin.

As I'm sure someone will spot sooner or later – the https://t.co/ZPhL6cDSCC just changed ownership. Jackson's transferred it to myself (Ross), and we're looking at arranging a non-profit to own it longer term. – Ross

The two held onto ownership of the website until very recently, but as they are no longer actively working on the Dogecoin project, they decided to pass ownership to the current developer team.

Control of the website will allow the developers to promote better and educate people on Dogecoin and the DOGE ecosystem. Eventually, the domain is expected to handled by a non-profit entity that can facilitate better ownership of shared items.