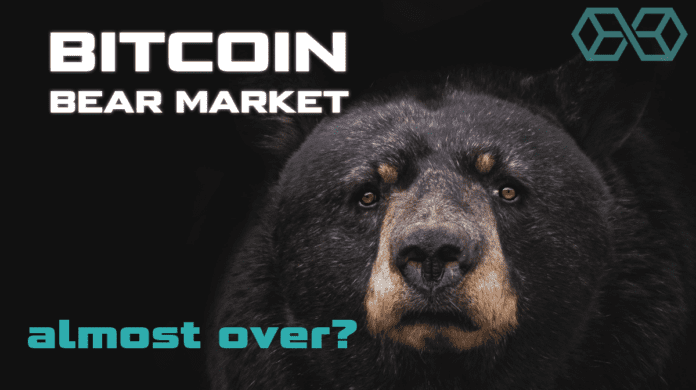 To help answer these questions, we’ve looked at the last three major pullbacks and corrections in Bitcoin to see how they compare to the current one.

We analyze various technical and fundamental factors, such as how severe the corrections were, how long BTC took to recover and make a new all-time high, and the main news narratives influencing price action.

Here are the last three major corrections, starting with the oldest up until the most recent. 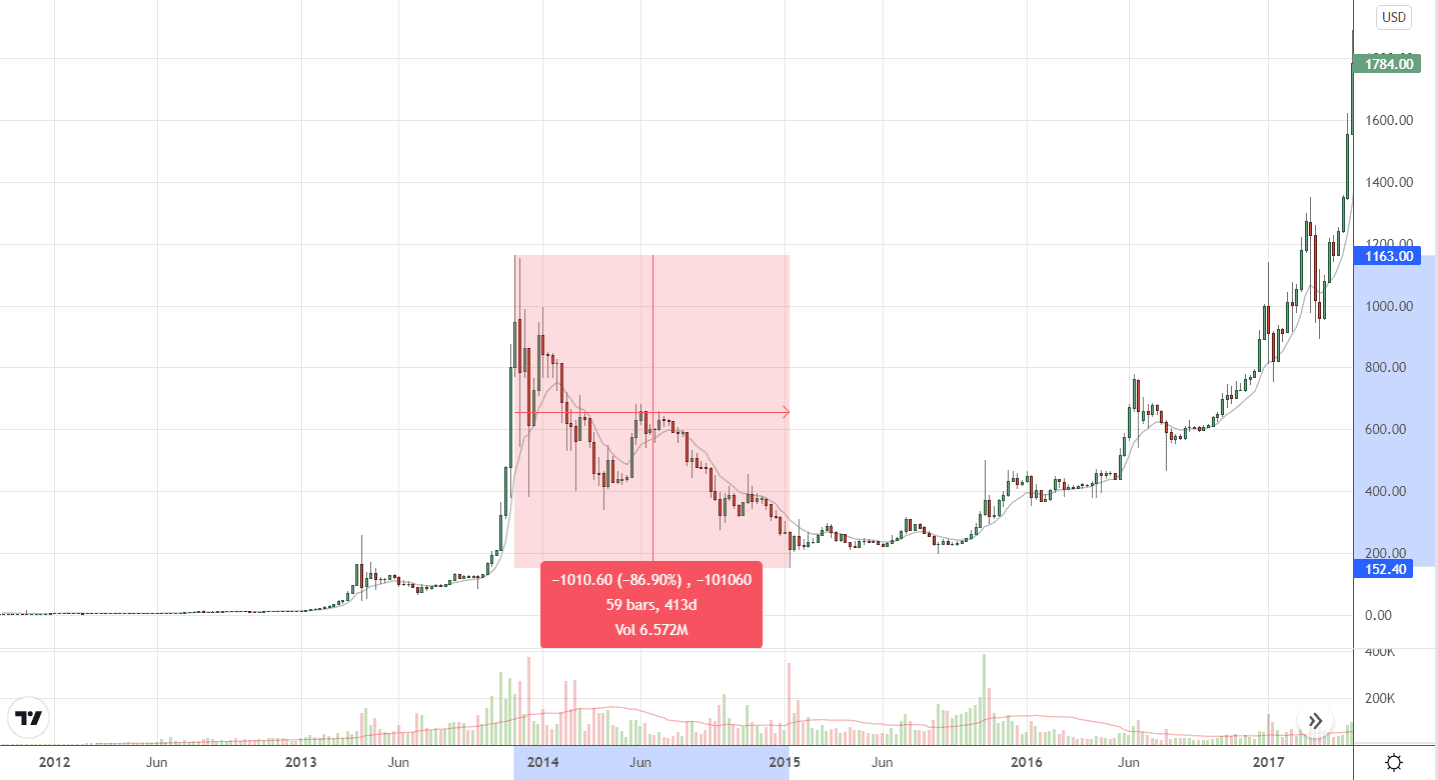 This bear market began as soon as the parabolic 2013-2014 bull market ended. Bitcoin increased 51,000% during this time, so it was due to have a correction.

BTC continued soaring higher from here, continuously making new ATHs until it peaked at around $19,700 in Dec 2017.

This bear market was comparable to the previous 2014-2015 bear market, as it declined by a similar percentage and lasted for close to a year. It also came after an explosive bull market that saw BTC make an ATH around $19,700. BTC fell from this ATH to a low of $3122 during the 2018-2019 bear market.

While the subsequent bull market that came after the 2018-2019 bear market was impressive (a 2,105% rise), there was some turbulence along the way. In Feb and Mar of 2020, global financial markets were spooked by the emergence of the covid pandemic. 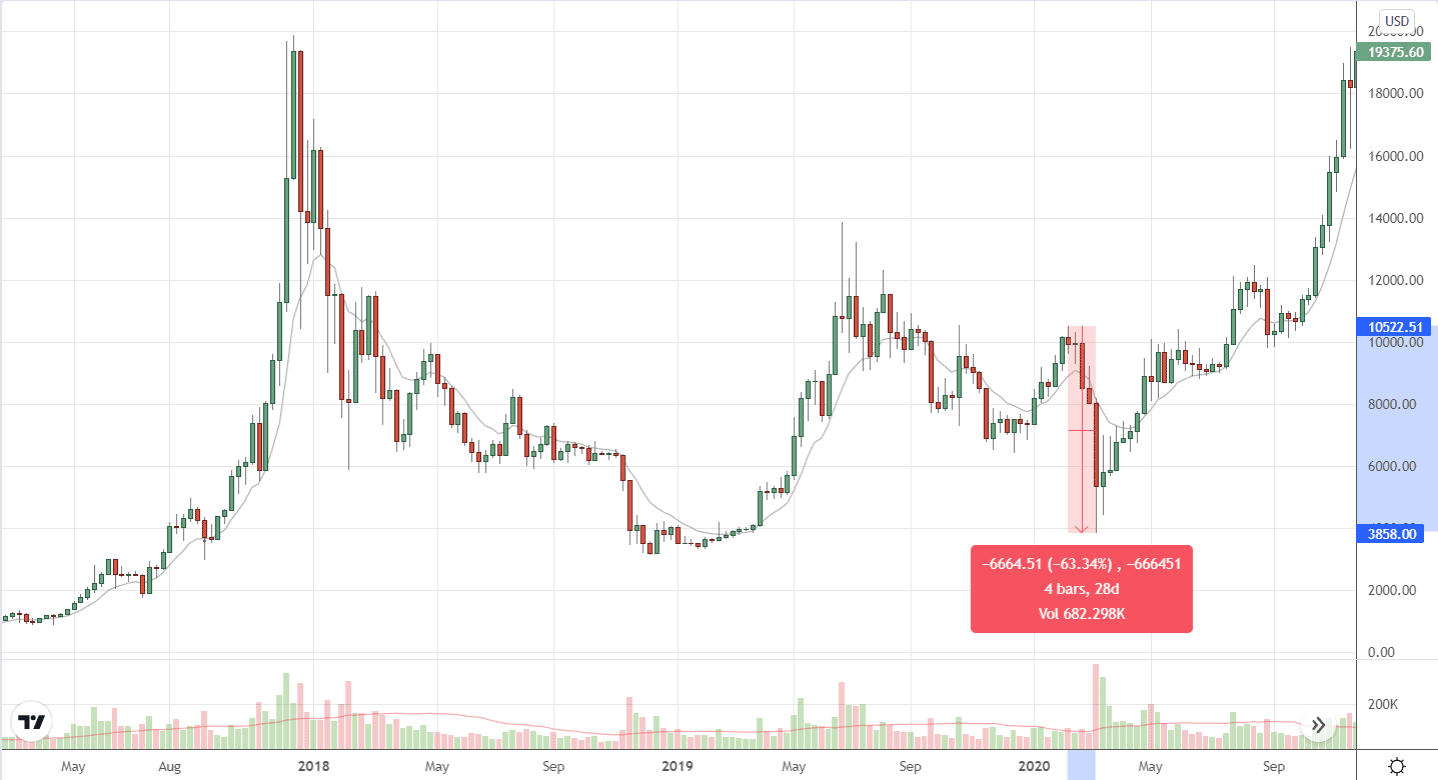 This correction in BTC was different from the previous two bear markets we’ve covered. It did not come after a protracted bull market and was driven primarily by negative news.

Therefore the characteristics of this pullback were also much different. Bitcoin’s price declined by a lesser amount (-63.34%), and the crash lasted only four weeks. BTC was also much quicker to recover this time, rising from the crash lows at $3850 back up to pre-crash levels in around 80 days. 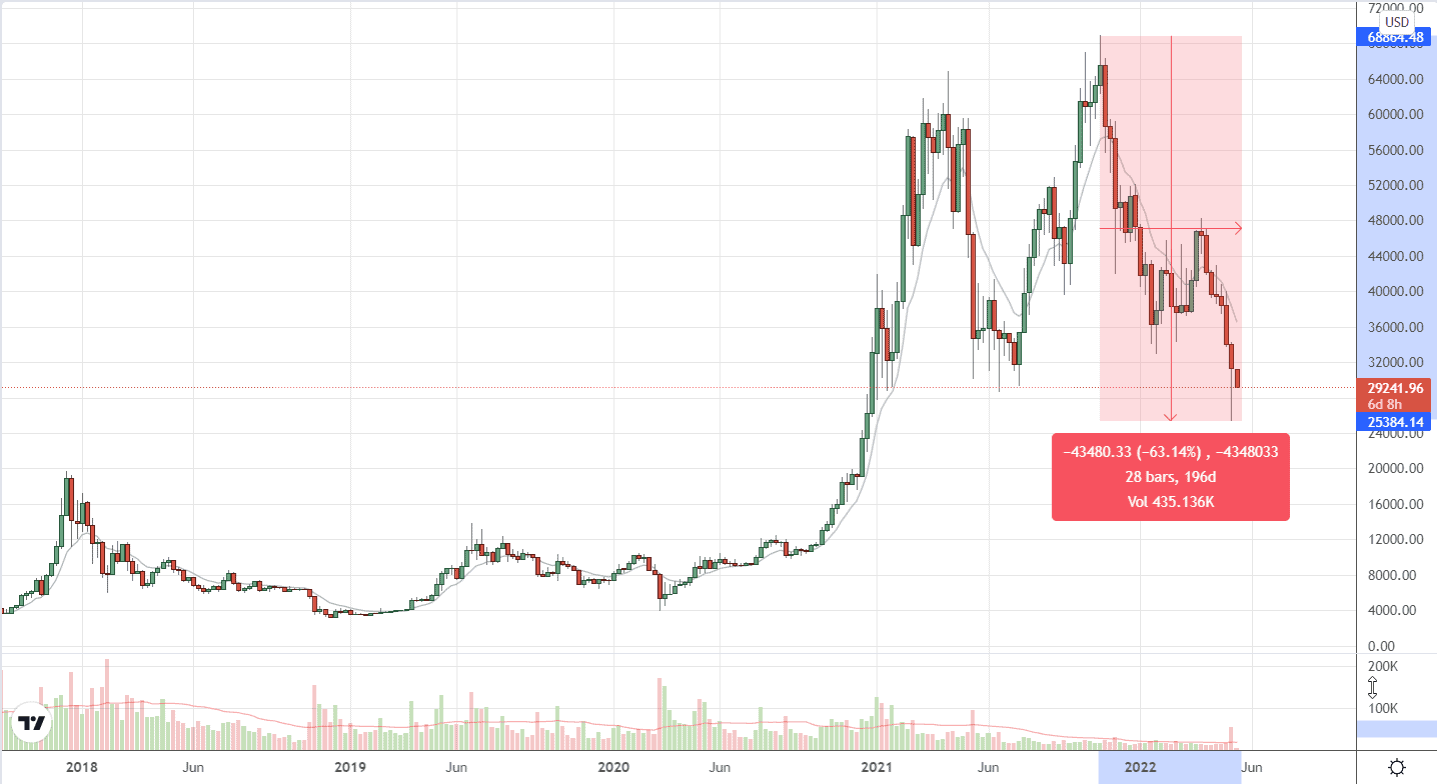 What Can We Expect Going Forward?

Well, as BTC has not recovered rapidly like during the covid pandemic crash, we look set for a longer-term move down or sideways here. Also, this theory is supported further by the fact that this bear market has come after a strong bull market in 2020-2021 which saw BTC increase by 2,105%.

Based on the previous two bear markets we’ve looked at, it seems we could only be about halfway through this bearish phase. Also, considering BTC’s price has only dropped -63.2% from its ATH, there is room for a further decrease to get us down around -80% from the ATH, in line with previous bear markets.

Of course, these are only estimates based on previous BTC bear markets, and this time it could go down much less or more than it did previously.

Is Now a Good Time to Invest in BTC?

It’s impossible to say whether now is a good time to invest or not. However, if BTC were to decline 70-80% from its ATH, which would take its price down to $13,700-$20,000, the odds of making a profit on your investment if you were to buy Bitcoin at this point would be in your favor based on previous bear markets. That’s not to say it’s a good idea to short Bitcoin; the market is too unpredictable to say what will happen with any certainty.

How Long Till BTC Makes a New ATH Again?

There is no guarantee that Bitcoin will make a new all-time high again in the future. However, if it does, it wouldn’t be unusual if it takes a couple of years from now based on the previous bear markets we looked at.

What Else Could Affect the Price?

Other factors may also come into play aside from the fact that Bitcoin may just be in a bearish phase, which is a normal part of the cycle in any financial market.

As was seen during the covid pandemic crash, significant macro events can also affect how BTC’s price behaves. Right now, here are some of the main news narratives circulating:

An escalation of any of these events could create more fear in the crypto market, leading to more severe price declines and volatility. Likewise, if any of these problems improve, are resolved, or are averted, this could increase optimism and help stabilize the market.

At the end of the day, Bitcoin has bull and bear markets just like any other publicly traded financial asset. This probably won’t be the last bear market, and fortunately, there should be plenty more bull markets to come too.

While bear markets can be extremely frustrating and painful for those already invested and holding throughout, they can also provide excellent opportunities for those who want to invest fresh new capital. If you choose to invest at this point, be sure to use one of the trusted crypto exchanges.