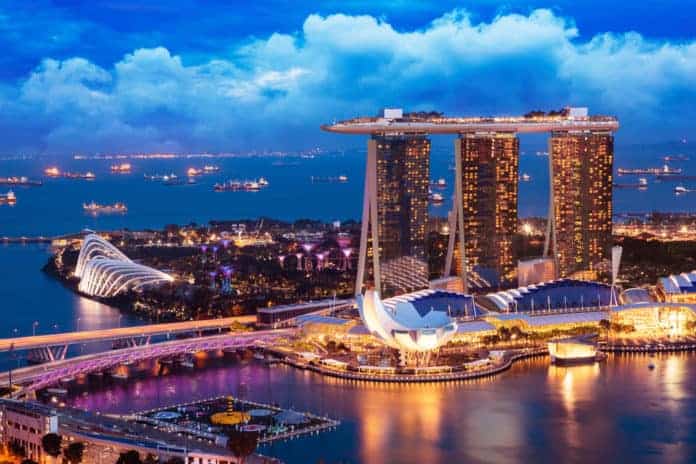 Despite being a small island nation with a population of only 5.6 million people, it’s an international fintech hub with over 200 banks and innovation labs from international financial institutions including Wells Fargo, UBS, DBS Bank, Citigroup, and MasterCard.

Contents hide
1 The MAS’s Project Ubin
1.1 Related Articles:
2 The MAS adopts a pragmatic approach on the blockchain and crypto industry

Due to Singapore’s business-friendly environment, innovative ecosystem, and diverse pool of talent, it’s also hosted a large number of new blockchain startups. According to Ravi Menon, a senior official from Singapore’s Central bank, the Monetary Authority of Singapore (MAS), there are as many as 50 startups that are working on blockchain-based technologies. A growing blockchain ecosystem supports these startups; Singapore’s local universities are researching the technology, venture capitalists are eager to invest, and large tech firms are exploring use cases of blockchain as well.

“Singapore is one of the countries in the world that is leading the way for the revolution and adoption of blockchain technology,” said Gaurang Torvekar, co-founder, and CEO of Indorse, a decentralized professional network powered by the Ethereum network. “This can be seen in both the private sector industries as well as amongst various government projects and initiatives.”

Singapore is one of the first Central Banks in the world to work with blockchain technology.

In 2016, according to the MAS website, Singapore’s Central bank began a collaborative project called ‘Project Ubin’ to explore blockchain technology in regards to clearing and settling payments and securities. A consortium of financial institutions including Credit Suisse, DBS Bank, Singapore Exchange, UOB Bank and the Bank of America Merrill Lynch was involved in the project.

Sopnendu Mohanty, the chief fintech officer of MAS, told CNBC in October 2017 that Singapore has a progressive approach when it comes to emerging technologies.

“Don’t fear doing experiments and don’t fall into traps of signaling policy changes. Some regulators are afraid to do experiments because of this tremendous external pressure on them. We are trying to drive that culture globally.”

The first phase for Project Ubin was a proof-of-concept. The proof-of-concept involved conducting inter-bank payments via blockchain technology. The MAS announced its successful completion on March 9, 2017. The MAS had also successfully developed software prototypes with The Association of Banks in Singapore (ABS) of “three different models for decentralized interbank payment and settlements with liquidity savings mechanisms.”

When it comes to the blockchain and cryptocurrency industry, the MAS has taken a pragmatic stance on the situation concerning blockchain-based startups and ICOs.

Singapore’s regulatory landscape is internationally known for its business-friendly environment and technological innovation. Cryptocurrencies are, however, a relatively new domain that carries with it a large number of risks.

“They have always supported and even lead various innovations in this area,” said Torvekar. “At the same time, they are also cognizant of the increasing scams in this area, and actively discourage any speculation regarding cryptocurrencies.”