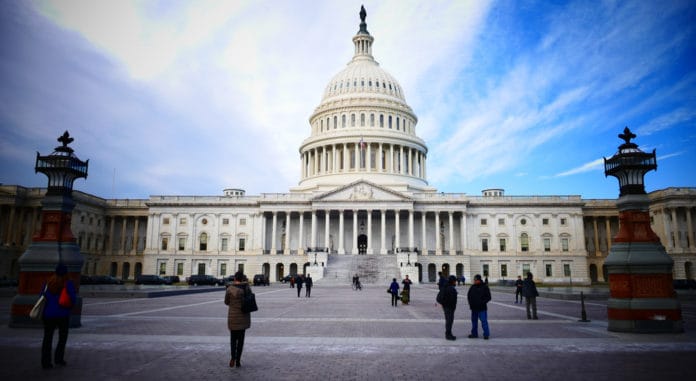 On May 8, 2018, the Subcommittee on Oversight and the Subcommittee on Research and Technology invited four witnesses, two from the public sector and two from the private sector to discuss blockchain applications. The hearing, titled “Leveraging Blockchain Technology to Improve Supply Chain Management and Combat Counterfeit Goods” can be viewed in its entirety on YouTube.

Although mostly serving as an educational forum to allow various members to express their views on the applications of blockchain technology, it was a pleasant surprise how positive several politicians and government officials were on blockchain.

Notably, Republican Congressman Barry Loudermilk expressed happiness that this topic was finally being discussed at the government level, describing himself as feeling like “a little voice in the wilderness on blockchain” and also stating that “it could be a solution to a lot of our cybersecurity and data protection issues.”

Dr. Douglas Maughan, the Science and Technology Directorate’s cybersecurity division director, a department within the Department of Homeland Security, was particularly positive about how blockchain technology could improve current supply chain management systems.

Maughan gave a potential example of the US Customs and Border Protection using blockchain technology to streamline its “shipping, logistics, and customs.” But the most optimistic quote that he gave was “I think the applications are almost limitless.” However, he did temper his remarks a little by later stating that not every potential use would require a blockchain, saying that in some cases a simple database would suffice.

Speaking for the private sector was Michael White, head of global trade digitization at Maersk, the world’s largest container shipping company. Back in January, Maersk announced that it had formed a joint venture with IBM to create a blockchain-based platform for global trade. This platform will help track the millions of shipping containers through a complete digitization of the supply chain process. As White, who will be leading the joint venture says:

“Blockchain is especially suitable for that because you can enable the parties which have a right to see and have access to information and see that information has not been tampered with or modified in any way, shape or form…The trust necessary to build this network would not likely exist without blockchain technology.”

The second private sector witness, Chris Rubio, a vice president at UPS further elaborated on this concept, stating that blockchain’s ability to accurately track any product through the supply chain “may provide a solution to unknown or unverified product origins.”

Lack of Common Standards a Barrier to Implementation

The idea of using blockchain technology in supply chain management is nothing new. Samsung might be doing it. So are Walmart and nine other major food companies such as Nestle and Unilever. When you think about the characteristics of the technology, it is actually one of the most obvious applications.

But one barrier to the widespread use of blockchain within supply chain management systems is the lack of common standards, a point that all four witnesses brought up. As Rubio said:

“Without these common standards, uncertainty will prevent the large scale investment that’s needed to blockchain a success in the supply chain.”

Of course, we are still in the early stage of blockchain. But as the industry matures and the ‘winners’ are defined, it is highly likely that one of its first widespread uses will be in supply chain management.