Contents hide
1 Related Articles:
2 Trezor Overview: The Model T
2.1 Unboxing the Trezor T
2.2 Model T Set-up and First-time Use
3 Model T vs. Trezor One
4 To Buy or Not to Buy This Trezor Model
4.1 The T’s Touchscreen
4.2 Trezor’s Display
4.3 Model T Design
4.4 Security on the Trezor
5 Model T Conclusion: How Good is This Trezor Wallet?
6 Reference

Trezor hardware wallets are the flagship project of the blockchain software and security group SatoshiLabs, which is also the creator of CoinMap. Pavol Rusnák and Marek Palatinus, the creators of SatoshiLabs and Trezor, built the Trezor wallets with audibility and open-source code in mind, rules which they still build by today.

Trezor’s security model works on a ‘zero-trust’ principle. Essentially, this means that Trezor expects even the most secure systems to become compromised at some point. Naturally, this has resulted in a line of hardware wallets from Trezor, which are incredibly secure.

Trezor frequently comes head-to-head with close competitor Ledger and its hardware wallet offerings, and there’s typically been a ‘Pepsi vs. Coke’ like following between the two hardware wallet manufacturers.

In the past, Trezor wallets have been in such high demand that there have been stock shortages of the original “One” Trezor hardware wallet. Now, Blokt looks at Trezor’s latest offering, in our Trezor Model T review, and examines how it shapes up next to its predecessor and other close competitors.

Trezor’s most premium offering, the Model T takes all the best bits from the One Trezor bitcoin wallet and enhances them with a range of new features.

Users will notice that the Model T is a slightly bigger device than its predecessor, due in part to a new full-color screen which takes up most of the front of the device.

At a glance, the statistics for the Model T are:

Pick Up a Model T 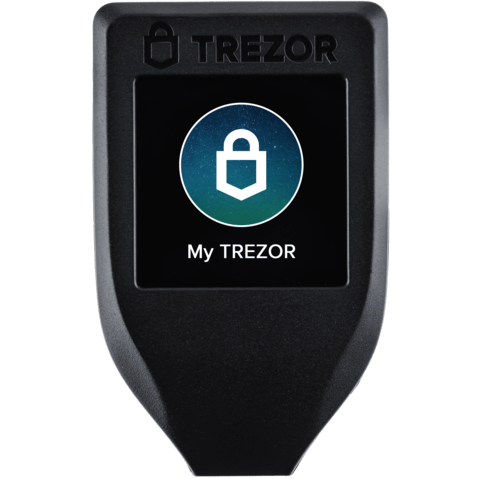 The Model T arrives in a premium looking packaging, complete with all the essential accessories for use, along with detailed instruction guides. The Model T also comes with a magnetic docking port which you can stick by your desk if you need to grab your Trezor in a hurry.

When unboxing, users will notice that the Model T will have a ‘holo-seal’ which covers the USB port of the device. This is tamper-evident packaging, which can also be found on the outside of the box, so you’ll know if someone has used the device before you. If the packaging is damaged, return it to Trezor and don’t use your device – as you could lose your funds.

Overall, the look and feel of the Model T is robust, but light. It’s got a plastic body, with an open port at one end for a single USB connection. The 240 x 240-pixel screen has a bright, glossy finish and easy readability. The Model T also has a MicroSD card slot on the side, for extra storage – a planned future feature.

Compared to some of its closest competitors, it doesn’t have the metallic finish or casing like the Ledger Nano X or KeepKey, but users can get their hands on metallic special-editions, such as SatoshiLabs 5th anniversary edition. These metallic editions definitely have a luxury look, but come at a price premium.

However, compared to the Ledger Nano X, the Model T comes in at exactly half the weight, making it a more desirable option for those who like to keep weight to a minimum.

Model T Set-up and First-time Use

Like its predecessor, setting up the Model T straight out of the box is fairly straightforward. Users are directed to download the Trezor Bridge software and install Trezor’s firmware on their device.

All Trezor models come without firmware, making sure the latest version is installed at its first use, to ensure they aren’t vulnerable to hacks. Once the firmware is installed, users can now begin using the Model T to store their cryptocurrency.

You might notice that the Model T doesn’t require users to back-up their mnemonic phrase, despite providing a card to write it down on. This allows users to skip the lengthy process of writing down their phrase when they first use the Trezor bitcoin wallet. Most other hardware wallets will ensure you write down your phrase, then have you re-enter it to ensure you’ve done so.

However, Trezor users will be prompted and reminded to write down their phrase, despite being able to use it without doing so. Despite this, it’s strongly recommended that you write down your phrase before you store any crypto private keys on the device. If you forget your PIN, lose or break your device, you may lose your funds forever.

Model T vs. Trezor One

The Model T and Trezor One have the same basic security features, and they largely differ in terms of accessibility and price.

To summarize, here are the major differences of the Trezor Model T vs. its earlier counterpart, the Trezor One:

To Buy or Not to Buy This Trezor Model

The Model T is no doubt an innovative device, and a great upgrade in technology from it’s earlier predecessor, the Trezor One. But at well over double the price, is it worth the extra money, and how does it compare to its closest competitors? Our Trezor Model T review explains:

The touchscreen offers enhanced security features with its changing keypad configuration and allows users to input their seed phrase during recovery straight onto the device; removing the dangers of exposing sensitive information on a ‘hot’ device.

However, the screen is on the small side, which can make operating the device a bit of a challenge. The Trezor One, which uses physical buttons to navigate its menu, actually feels a little easier to use, offers the same security standards, and is available for less than half the price.

Even though some users won’t be at all concerned with the aesthetics of their hardware wallet, the Model T isn’t the flashiest looking device. Compared with the Ledger Nano X, or even the older Ledger Nano S, both of which feature brushed metallic covers, the Model T looks fairly utilitarian with its all black plastic body. See our Ledger Nano X review for more on Ledger’s new model.

Security on the Trezor

Model T Conclusion: How Good is This Trezor Wallet?

All in all, despite its fairly high price, the Trezor Model T is safe, easy to access and a functional hardware wallet, which once again proves that the original name in cryptographic security can continue to innovate five years after its launch. Anyone looking to buy Trezor’s Model T wallet will not be disappointed.

Pick Up a Model T

Expert Take
"All in all, despite it’s fairly high price, the Trezor Model T is a safe, easy access and functional hardware wallet, which once again proves that the original name in cryptographic security can continue to innovate five years after its launch."
Elliot Hill, Blokt

Pick up a Model T 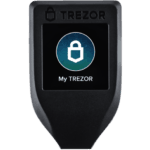