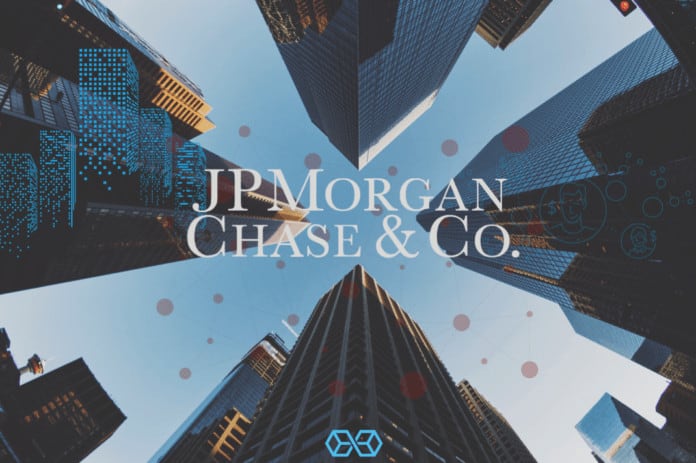 According to the US Patent and trademark office, JP Chase Morgan & Co just filed a patent that concerns “systems and methods for the application of distributed ledgers for network payments.”

The application dated May 3rd, 2018 depicts a scenario where a payment originator initiates a payment instruction to a beneficiary. The instruction is then relayed to a distributed ledger in a peer-to-peer network before transaction validation, and acceptance takes place.

“Distributed ledgers, such as Blockchain, provide a unique system for recording transactions and storing data. In general, distributed ledgers hold a log of transactions that may be replicated across a public or private distributed network. Cryptography and digital signatures may be used to determine valid parties and transactions such that all parties/observers agree on the order and state of the ledger in real-time without having to rely on a trusted third party to hold the true ‘golden copy.’ The distributed ledger thus provides a practically immutable, verifiably true audit trail.”

Reads the Description of the Related Art in the patent application.

This is not the first attempt by the bank to protect its so-called Distributed-Ledgers-based banking settlement systems. Two years ago, the bank patented Quorum, another Blockchain-based peer-to-peer payment method that mostly targets cross-border payments and financial services.

It’s also worth mentioning that the patent date comes exactly one month after the bank’s top Blockchain executive Amber Baldet resigned on April 2nd, 2018 to start her own venture.

The crypto community is still baffled by how little the “big sharks” understand the values behind Blockchain as a technology, with open-source as the main driver for collaborative knowledge and innovation. Clearly, the carrots and sticks mindset is prevailing in our high-street banks. Knowing that JP Morgan’s Blockchain is a replication of Ethereum’s Blockchain – an open source project with zero white-collar seed funding or early support –, the ethics behind patenting already existing innovations is questionable, to say the least.

From Fraud to Adoption

It’s worth recalling that JPMorgan Chase’s CEO Jamie Dimon is a fervent opponent of Bitcoin. Commonly referred to as “Crypto-hater of the year” in 2017, he has often called the cryptocurrency a “fraud”, a “bubble that will blow up” and goes as far as to threaten to fire any employees caught trading on Bitcoin for being “stupid”.

Detaching Bitcoin and cryptocurrencies from the very technology that enables them is simply an argument with no logic behind it. Although usually employed by big corporations to keep their distance from the largely deregulated field, we should bear in mind that Blockchain cannot be dissociable from Bitcoin as much as traditional money cannot be separated from central banks.

In the meantime, every day brings new challenges for crypto adoption and new promises for the future of finances.