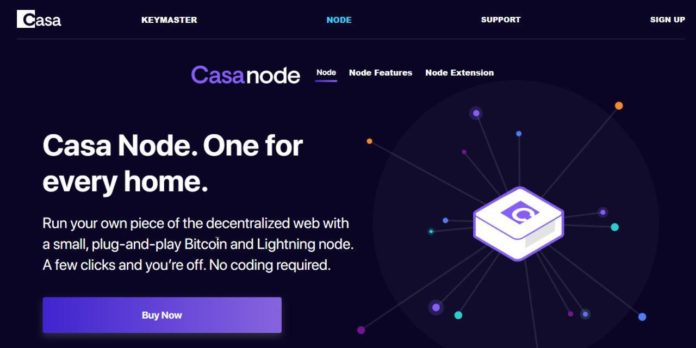 Casa, founded in 2018 by Jeremy Welch – now CEO, is a blockchain company focused on providing financial self-sovereignty and leading security for Bitcoin private keys. Employing other prominent members of the Bitcoin community, such as CTO Jameson Lopp, Casa have grown rapidly despite the downturn in the crypto markets which marked most of 2018.

Casa’s products include the Casa Node, Sats App, and the Casa Keymaster. The Casa Node allows everyone to run their own plug-and-play Bitcoin lighting node through a small device, around the size of a standard router. The Keymaster is described as “the best multisig on the planet,” a user-friendly system which lets users keep full control of their funds.

Users of the Casa Keymaster service can subscribe to yearly plans which offer varying levels of fund security, from Gold Membership at $300 per year, right up to Diamond Membership at $5,000 per year – described as “the ultimate in crypto security.”

Essentially, Casa is a leading solution which helps its subscribers plan for long-term Bitcoin custody, as they see digital assets becoming a huge part of institutional investors portfolios in the future.

Brian Lockhart is a product developer and engineer with a long and distinguished career in software development. Having worked at Microsoft on Xbox products, MSNBC, MSN, and Tableau, Lockhart is joining Casa to work primarily on their Casa Node product.

At Tableau, Lockhart assisted the team in building leading server and online products, at a time of rapid expansion for the company. Lockhart left Tableau in 2016 to spend more time on family life, before becoming interested in the Bitcoin space. After becoming a strong member of the Bitcoin community, Lockhart founded the Seattle Bitcoin Meetup.

Lockhart will work alongside other members of the Casa team to develop the Casa Lightning Explorer for the Bitcoin Lightning Network, and also help develop the Sats Extension for Google Chrome and Firefox browsers.

Lockhart tweeted that Casa’s goal was to make Bitcoin better, by offering consumer-friendly products and services, without forgetting the fundamentals and founding principles of the digital currency.

We’re making Bitcoin better, by building consumer-friendly products and services for all Bitcoiners – without sacrificing on fundamentals that make Bitcoin so empowering.

Litecoin creator Charlie Lee tweeted his congratulations to Casa, remarking that he has the same feeling about Casa’s future as he did for Coinbase in its early days – which he joined in 2013.

Congrats on the hire!

I have the same feeling about Casa today as I had about Coinbase when I joined in 2013 as the 3rd hire. Casa is making Bitcoin easy to use and that is extremely important for this space. Looking forward to great things!

Lee is an investor in and prominent supporter of Casa, believing that the issues of sovereignty and key ownership, and the ease in which they’re stored, are integral for the industry. Lee commented that he is looking forward to great things from Casa in the future.

The Future of Casa

Casa has many plans on the horizon, including the continued roll-out of their Casa Node products and Keymaster subscription services. Casa also has its own ‘Casa Store,’ which sells Casa Nodes, and also Ledger Nano S and Trezor Model T devices.

One Twitter user, called The Bitcoin Squirrel, jokingly commented: “BTW please get rid of that strange cable connecting the Casa with itself.” To which Lockhart lightheartedly replied, “That’s the main reason I wanted the job. That cable! It’s gotta go!”.

We’re fairly sure that Lockhart is going to bring much more innovation to Casa than that, but it seems he’s already got his development priorities laid out.