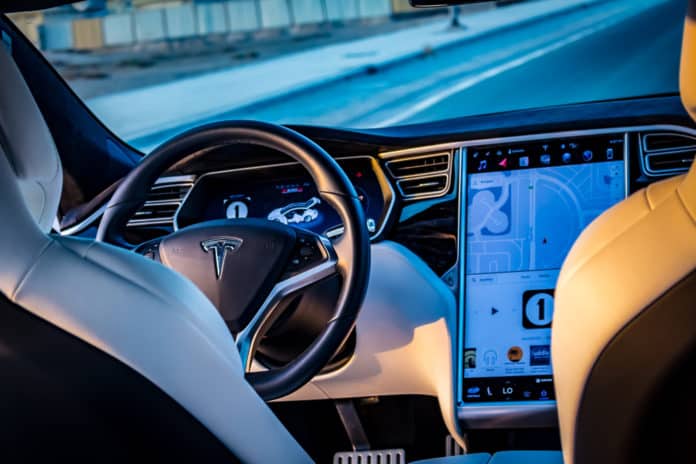 As modern citizens, we’ve become well accustomed to being watched. Walk down any street in most urban areas across the globe, and it’s highly likely you’ll lose count of the number of surveillance cameras keeping a silent watch over their surroundings.

From buildings adorned with cameras, Google Street View giving candid glimpses of daily life, or satellite imagery which can see into your garden, 21st-century surveillance is everywhere.

It’s not an Orwellian dystopia either; it’s simply the norm. But now, there’s a new supercharged breed of cameras which are on track to collect enormous amounts of public image data, and it’s highly likely that the average urban citizen will be captured in their gaze hundreds of times per day.

They’re autonomous vehicles, and they have multiple cameras on wheels – coming to a street near you soon.

This 3D reconstruction shows the immense amount of depth information a Tesla can collect from just a few seconds of video from the vehicle's 8 cameras pic.twitter.com/w2x6pkM2Eb

While driverless cars are still a nascent technology, a recent video released on Twitter by the leading electric autonomous car manufacturer, Tesla, revealed the extent of data collected by one of its vehicles in just a few seconds of driving.

The 3D video, which was captured as the car navigated itself down a bustling city street, showed a detailed rendering of surrounding buildings, parked vehicles, street lamps, and even shop signs.

Vitalik Buterin, the founder of the Ethereum blockchain, tweeted:

Surprised that few are taking the "OMG scary mass surveillance" angle on this one. Just think about how often you'll be in line of sight of a self driving car just walking along the street in 20 years. https://t.co/h3HR45rxi4

He further remarked that for those living in cities, in-person privacy was not a “winnable fight” anymore.

For those who like to draw parallels with 1984 fantasy and our daily reality, this has obviously conjured up visions of Tesla’s self-driving spies cruising the streets, watching citizens in high definition 3D as they go about their daily lives.

This comes shortly after Tesla recently announced the release of all Tesla vehicle patents, to encourage other auto manufacturers to incorporate Tesla technology into their fleets, and it’s widely believed that within the next 20 years, 95% of cars will be autonomous.

Fitted with advanced optical systems, including long-range radar, 3D cameras, night vision, LIDAR, ultrasound and standard cameras, the average autonomous vehicle features 8 separate cameras around the car, which can generate up to 100GB of raw data per second.

This has naturally led to some fierce debates on who owns this data and what rights do individuals who are unavoidably captured in driverless car’s sights have?

The rising popularity of driverless cars and the likelihood of their mass adoption is raising several vital questions from groups concerned with individuals’ privacy and data collection best practices. Principal among these concerns is who owns this data, and how is it used?

Visual data, like Tesla, have recently demonstrated, is simply one aspect of the enormity of data autonomous vehicles have the potential to collect. Seventeen U.S. states have already passed statutes which cover the privacy issues of data collection from “event data recorders,” which are fitted in the majority of self-driving cars.

Lobbyists say that such data collection, which may include statistics on driver braking patterns, collision information, driver behavior, number of passengers and speed, can be used by groups such as insurance firms to target drivers for higher premiums, or by law enforcement to track individuals of interest.

There’s a lot at stake, too. Experts predict that by 2030, the value of data collected from autonomous vehicles will range from $450-$750 billion, with interested parties including gas stations, retailers, mechanics, and even food outlets – all vying for data on where people are headed next.

The 2025 Automated Driving Community, who promote industry best practices, reported that 48% of U.S. consumers were unaware that connected cars could store and share their personal data, which even includes sensitive data such as drivers home address and social security numbers.

It’s clear that more needs to be done to educate drivers on the data driverless cars collect and form a robust framework for how this data collected from the public domain is used.

It’s hard to ignore that driverless cars open up some huge unanswered questions about data privacy and individual rights. The ongoing threat against our privacy has led to many seeking ways to avoid surveillance from governments and big tech firms, such as by using VPN services and steering clear of social media.

However, as a future technology, the potential of autonomous vehicles to make driving safer and our transport industry more efficient is huge, with industry bodies citing that driverless technology could reduce road traffic accidents by up to 80% by 2040.

First, however, government agencies and the general public alike will have to decide on how we accept and regulate these vehicles adding a new layer of surveillance to our already heavily monitored daily routines; before, as Vitalik Buterin says, in-person privacy is completely eroded.