Mining Bitcoin and other Proof of Work (PoW) cryptocurrencies has traditionally required users to invest in expensive mining hardware, called ASICs, to mine new coins. 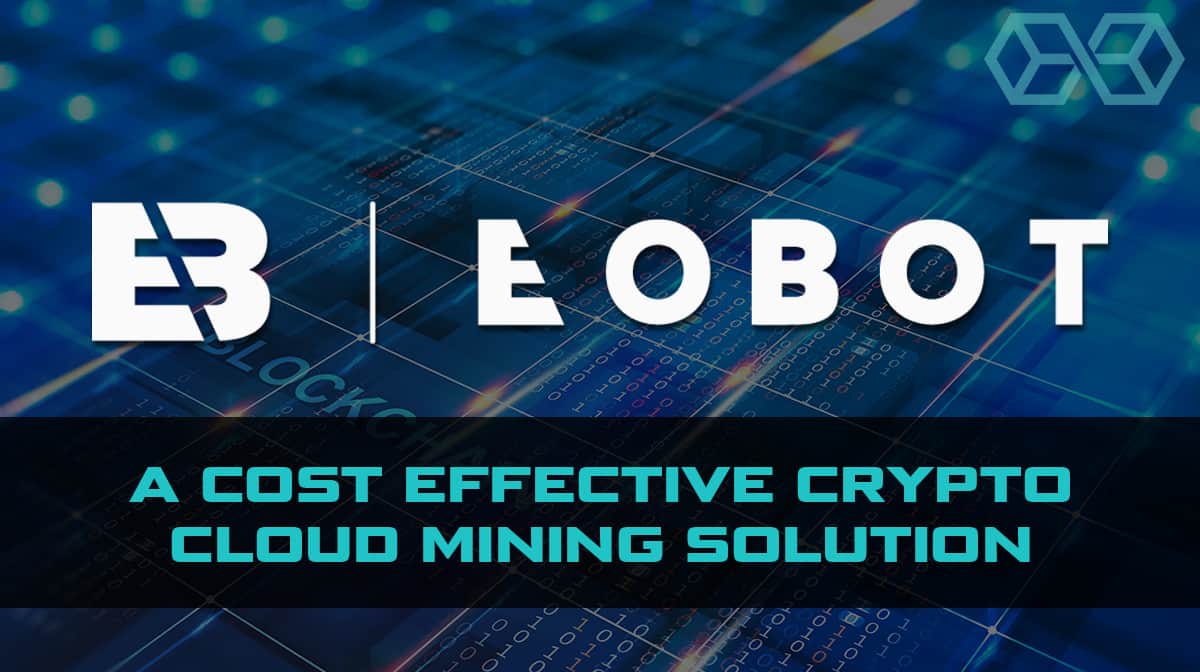 Instead, some operators are using cloud mining solutions, which require little to no hardware to maintain, produce no heat and require virtually zero electricity for the user – with the cloud mining operator providing the hardware hashing power.

One veteran cloud mining operator, Eobot, is a firm favorite among cloud miners, and in this article, we’ll take a look at why this cloud mining and exchange service has stood the test of time.

Eobot, is a cloud mining service and cryptocurrency exchange launched in 2013 in the USA. Eobot is browser-based, but also has apps available for both Android and iOS.

With over 2,2 million total users, and thousands of users online daily, Eobot both a real-time exchange allowing trading between multiple different digital assets and a sophisticated mining service for a huge range of digital assets.

Eobot doesn’t offer your usual trading experience. Instead, Eobot offers more savvy cryptocurrency users the chance to exchange any of Eobot’s supported assets between each other.

This is especially beneficial for cryptocurrency miners, who may switch the coins they are mining frequently to remain profitable. For example, users that were mining Ethereum could swap there ETH tokens via Eobot for BTC or any other supported crypto.

Users will notice that the exchange user interface is very simple. This is because Eobot is predominantly aimed towards mining pool operators, or users of Eobot’s cloud mining service, and not towards high volume trading.

The result is an easy to use and utilitarian exchange facility which makes trading between assets on Eobot quick and easy.

Eobot users can trade a huge range of assets on the platform, including:

In addition to several other digital assets. Whilst Eobot’s exchange has limited asset support compared to say, Binance or Bittrex, the assets on offer reflect those available to Eobot’s cloud mining service, which we’ll explore later.

Exchange users can also make use of Eobot’s faucet feature, which gives out a small amount of a random free cryptocurrency to users once per day, which is a novel feature to keep users coming back to Eobot daily.

Deposits in fiat currencies are currently not supported on Eobot, due to varying international laws surrounding cryptocurrencies. In particular, as Eobot is USA based, they must comply with MSB and FinCen regulations.

Users can instead make deposits in any supported digital asset which trades on Eobot. If you need to get started buying your first crypto to use Eobot, see our beginners guide on how to buy Bitcoin.

Withdrawals can be made in 20 of the supported cryptocurrencies on Eobot, covering most of the major assets. For those who wish to withdraw their balance of a different asset, they would first have to exchange their funds for another asset on Eobot which supports withdrawals.

There’s very low minimum limits on withdrawals, for example, 0.002 BTC, 0.05 ETH, and 0.1 LTC. Maximum withdrawals, like most exchanges, are dependent on individual users verification level, starting at a maximum of $2,000 per day as shown below.

There are no monthly fees or membership fees to use Eobot’s exchange service. However, every trade made on the exchange is charged a flat 5% fee. This may initially appear higher than some other exchanges, but Eobot’s major benefit is the ability to trade any of its supported assets between each other.

All exchanges made via the Eobot network will also incur miner’s fees, which will be highly dependent on the blockchain which the respective cryptocurrency being traded belongs to – so watch out for these fees.

Eobot’s main focus, which it’s exchange function operates as a feature of, is cloud mining services.

Eobot’s cloud mining service can be rented on a 10 year down to a 24 hour time period, with immediate results and mining updates every 60 seconds.

Eobot supports a wide range of assets via its cloud mining service, including:


In addition to 14 other assets, all of which are available to swap via Eobot’s exchange service.

Eobot charge fees for its cloud mining services, to cover both electricity and maintenance costs incurred by them.

In short, these fees are equivalent to around 50% of a users earnings, however, the actual sum is a little more complicated than that, based around how many gigahashes per second (GH/s) users require, and what model of Antminer hardware (a type of ASIC) mining runs on.

Here’s a table detailing some of the costs of Eobot’s mining service:


Note that a few of the fees above have reached 100% – as the difficulty of mining increases, and the Antminer models progress, some methods of mining will become economically impossible to sustain, and Eobot will effectively cancel that contract.

However, Eobot still provides information on past cloud mining contracts, as it’s interesting to see how mining has progressed over time.

Eobot has an impeccable security record, and according to its F.A.Q, they have never been compromised during a hack. Despite being operational since May 2013, Eobot has never suffered a critical attack on its site.

For account safety, Eobot enables email 2FA as standard, though users can also opt to enable Google 2FA or Authy. It also has a number of other safety features.

Eobot provides transparency to its users by displaying all the ‘hot wallet’ funds which are on the site at any given time, which it calls the ‘Public Audit’. This list is refreshed every 60 seconds. This allows users to see how much crypto capital is ‘at risk’ at any given time on Eobot.

Likewise, Eobot runs a bug bounty program through Hackerone. So far, no bugs have been identified in Eobot’s code.

In the unlikely event that Eobot is hacked, its ‘Hacker policy’ takes effect. In this scenario, Eobot has a 17 BTC emergency fund held in cold storage, around $100,000 at the time of writing.

The cold wallet is completely isolated from Eobot’s codebase and acts as an option of last resort to reimburse affected users in an exchange hack. The hack wallet is separate from Eobot’s main wallet, which is also held in cold storage, of 165 BTC.

Overall, for its primary user base, which is mining pool operators and cloud mining pool users, Eobot provides an easy to use and complete suite of tools for mining, transacting and exchanging cryptocurrencies via cloud-based services.

Its user interface is simple, but as it’s aimed predominantly towards tech-savvy blockchain enthusiasts, this doesn’t detract from the user experience and feels comparable to sites such as Bitcointalk, which has likewise been a firm favorite of avid Bitcoin users.

In terms of fund security, Eobot’s track record speaks for itself, with no critical hacks ever having occurred on the site. Whilst this might make some operators complacent, Eobot is aware that code flaws may happen, and have an insurance fund ready to reimburse users in that eventuality.

In conclusion, for those looking to mine cryptocurrencies as a side project or to generate income without buying expensive hardware and incurring serious electricity costs, Eobot is a perfect choice with a large range of supported assets, easy deposits, and withdrawals, and an easy to use exchange function.