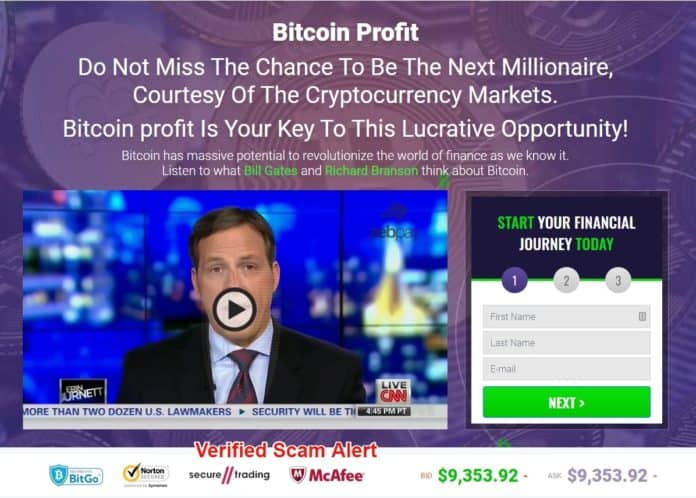 It’s hard not to get excited, or curious at the very least, when you see or hear about people making a fortune trading cryptocurrency. Unfortunately, many people who explore the world of crypto end up losing their money to Bitcoin scam sites like The Bitcoin Profit, The Bitcoin Code, The News Spy, Bitcoin Loophole and so on.

Contents hide
1 Related Articles:
2 Cheap Actors, Fake Screenshots, and Shadowy Ownership
3 So, Is Bitcoin Profit, in Fact, a Scam?
4 Invest in Bitcoin Profit at Your Own Risk!

The Bitcoin Profit is one such scam. It purportedly exists to make you rich. All you need to do is open an account, deposit your money, and let the trading platform trade Bitcoin on your behalf. Lies.

To begin with, Bitcoin Profit makes the extraordinary claim that people have made millions by investing in Bitcoin. The site supposedly gives you the opportunity to become a member of this exclusive millionaires’ club.

FOMO (i.e., the Fear of Missing Out) can be a powerful motivator. A video on the site capitalizes on this feeling by telling you that everyone who invested in the cryptocurrency has already cashed in on their millions in profit, a patently false claim. Even without years of experience as an investment analyst, you can’t help being skeptical about the astronomical returns on investments that the platform promises.

There are many reasons to distrust Bitcoin Profit. It reeks of the standard get-rich-quick scheme. The software’s user interface is wanting. Most importantly, it doesn’t teach you about cryptocurrencies and how to profitably trade them. To make matters worse, the site collects users’ email addresses and inundates their mail with spam.

Bitcoin Profit relies on the questionable talent of gig actors it hired from Fiverr and attempts to pass them off as satisfied investors. The site even goes as far as posting fake screenshots of fictitious conversations in which friends brag about their success making a killing on the site.

According to the site, John Mayers, a supposedly renowned cryptocurrencies investor, created Bitcoin Profit. However, there’s a profound lack of verifiable information about the person or organization behind the site. This dearth of information is characteristic of Bitcoin scam sites.

So, Is Bitcoin Profit, in Fact, a Scam?

Yes. Bitcoin Profit certainly fits the definition of a scam. While it’s possible for you to make a profit in the short term on the site, it seems that Bitcoin Profit compares poorly to other Bitcoin yield sites. Regardless of the abundance of fake reviews that praise the website, digging a bit deeper reveals that the trading system is not legitimate. The few people who manage to make quick money on the site are the exception rather than the rule.

Additionally, the website’s disclaimer regarding the potential earnings users can make serves a clue for the platform’s illegitimacy. The disclaimer asserts that “individual results can vary.” aIn fact, the website at one point goes on to say that all the information and event that it depicts is “entirely fictitious.”

Invest in Bitcoin Profit at Your Own Risk!

Don’t give Bitcoin Profit your money. Sure, there’s a non-zero chance that you’ll make quick money. But these minimal odds of making a profit don’t come even close to justifying the risk of losing your money. If you want to profit from investing in Bitcoin, explore other avenues.