You’ve probably never read a single scientific journal in your life, and neither have I. This might lead you to think that scientific publishing would be a small niche industry, but this couldn’t be further from the truth.

According to the International Association of STM Publishers (STM stands for Scientific, Technical, and Medical), the global STM information publishing market was worth $25.2 billion in 2015 with 7 to 9 million active researchers. Further, it is likely that this is an underestimated figure due to the private nature of the industry.

Of course, we as a society should be grateful that this market is worth so much since it means greater dissemination of scientific knowledge, which would benefit us all. However, just as few people realize the massive size of the industry, even fewer know that the way the industry is currently set up results in an oligopoly that actually inhibits the spread of scientific information.

This is where Orvium comes in. Orvium intends to change this by creating an open source and decentralized platform for the publishing of scientific journals. 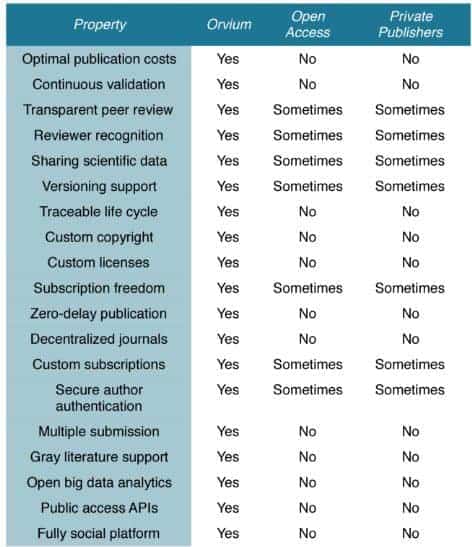 The STM publishing industry is dominated by a select few publishers, with the top five publishers accounting for an estimated 50% to 70% of all publications. Because of this, they can enact exploitative policies toward researchers, such as NDAs, on the cost of publishing contracts, which are entirely against transparency, and make researchers sign over the copyrights to them.

All of these practices create an inefficient publishing model with a myriad of problems such as:

The mother of all these inefficiencies in the model is the ‘Triple Pay’ model that results in a disproportionate gain for the publishing oligopoly. Here’s a quick explanation.

Essentially, the whole scientific publishing business model is centralized, inefficient, and is slowing down the rate of scientific progress. That’s why Orvium is looking to disrupt the entire industry to make it more equitable and efficient for all parties (including society as a whole) involved.

Orvium, built on the Ethereum network, is an open source (accessible via public API) platform which combines decentralized storage, big data analytics, and cloud computing. The basic principles behind the platform are:

These free market principles will result in a more efficient model for all. Orvium also has a litany of features designed to improve upon the current model. They include:

All peer reviews will be open and public. Further, they are also constant, which keeps the quality high. Multi-author reviews are also supported.

Once uploaded on the platform, a paper will immediately be published; even if it is only in the draft stage.

As the paper goes through its various iterations, each one will be time-stamped and recorded on the blockchain (of course, authors choose when to upload each new version on the platform). This gives each paper full lifecycle traceability and can even educate people on how a scientific paper is actually written. This transparency also helps combat issues of plagiarism and conflicts over idea ownership.

Orvium will allow authors to share research data either with the whole community or with specific participants. This will allow other authors to cite not just other papers, but their associated datasets as well – a big plus for the scientific community.

Instead of just papers, participants can also use Orvium to create their own decentralized journals within the platform. This will allow authors to band together and create a more cost-effective publication model (as opposed to purchasing individual papers). This is one of Orvium’s most revolutionary features and is the one that may have the most capability to disrupt the existing scientific publishing industry.

Because Orvium gives journal creators lots of freedom in determining subscription models, contribution rights, these decentralized journals will allow for a greater variety of scientific journals. For instance, ‘gray literature’ papers which do not pass through traditional publishing channels such as technical reports, government documents or even whitepapers can be published.

The ORV token is used to power the Orvium ecosystem. Here’s how each ecosystem participant can spend or earn ORV tokens.

When authoring a paper, researchers can pay ORV tokens for peer reviews (by staking a certain amount of tokens when submitting a manuscript), market data, or research data rights. Researchers can earn ORV tokens from contributing to a journal, readers, providing research data access, conducting peer reviews, and for scientific patronage campaigns.

Note: Scientific patronage campaigns are one of Orvium’s most unique features whereby anybody can post a challenge or problem to be solved. To post a challenge, they will have to stake ORV tokens and those who solve the challenge will receive a percentage of said tokens.

Anybody on the platform, without being an author or journal owner can spend ORV tokens in exchange for market data, creating or contributing to scientific patronage campaigns or for encouraging reviews of existing papers.

Orvium itself earns its fees by taking a percentage from journal subscriptions/reading plus an initial fee when a journal is created.

Right now, Orvium’s development is still in the early stages. After their ICO sometime in July, Orvium will focus on expanding the team and creating the platform (a functional prototype is planned to be released prior).

The ‘basic’ version of the platform is targeted to be ready by the end of Q3 2018 with licenses, copyrights, and decentralized journals to be added by Q1 2019. The fully functional platform, complete with big data analytics, is only targeted for a Q4 2019 release date.

While Orvium has not announced the specific date for its ICO, the other pertinent details are as follows:

Note that there will be a pre-allocation round in June/July prior to the main ICO. Participants in this round will get a 10% bonus. The ICO is being conducted through Bitcoin Suisse, and you can register for it through Orvium’s website.

One of the most impressive things behind Orvium is its team, which features capable, experienced members with backgrounds working in companies such as CERN, which is the European Organization for Nuclear Research. It is one of the most respected scientific institutions in the world and is famous for developing internet technology and operating the Large Hadron Collider.

Manuel Martin, Orvium’s co-founder, is currently a Big Data Engineer and Data Scientist at CERN, and Antonio Romero, another co-founder, is a Software Data Engineer at Volkswagen Data:Lab. Its scientific advisory team counts a senior director at CERN, and the CTO and manager at NASA’s Jet Propulsion Laboratory. As for Orvium’s software engineering team, all of them are work at CERN.

At its surface, Orvium would be another early-stage ICO with no working product and an ambitious whitepaper. But two things set Orvium apart from the ICO pack.

The first is a clearly defined market need and associated solution that also creates a social good by helping improve the dissemination of scientific knowledge. The second is the pedigree of its team and advisory board; as an early stage project, the credibility of Orvium’s team is absolutely critical. Fortunately, in this case, Orvium’s team is stacked with engineers of the highest caliber that are associated with the most prestigious government-linked scientific institutions.

As such, even though it’s still in its early stage, Orvium is one project that you should definitely be paying attention to. With such a high-quality team at its disposal, Orvium has the potential to disrupt the $25 billion STM publishing market and make scientific knowledge more accessible for all. Using its ICO price of 1 ORV = $0.10, the entire project will be valued at $40 million which does not seem much compared to the size of the industry and what Orvium is offering.

What do you think of Orvium? Can its team, with their stellar qualifications, accomplish their ambitious goal? Let us know what you think in the comments below.