The blockchain technology that underlies Bitcoin, Ethereum, and other popular cryptocurrencies have enormous potential, but that potential is not unlimited. While blockchain may be able to change the world – from altering the way we pay for goods and services to making elections more secure – it is also essential to understand its limitations as well as its enormous advantages. 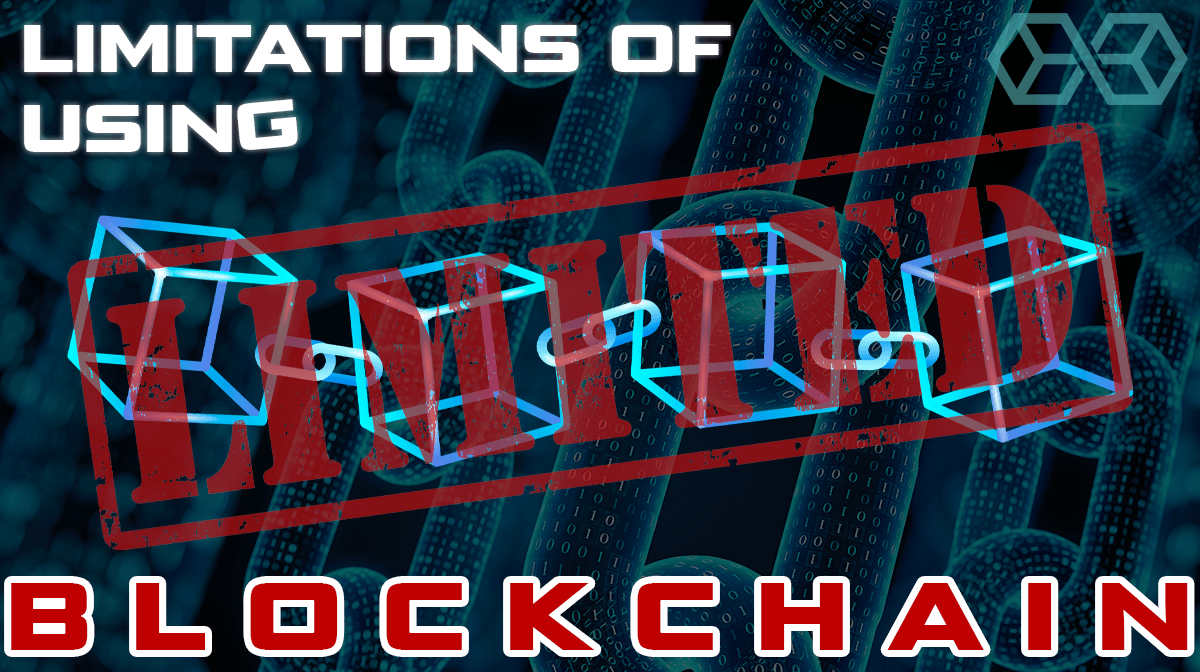 So, what are the limitations of using blockchain technology, and how might those restrictions impact the cryptocurrency market, the financial world, and other important industries?

It is easy to get caught up in the hype surrounding Bitcoin and other cryptocurrencies, and many people have bought into the thought that the blockchain has unlimited potential. Unfortunately, that is not the case. There are significant challenges and limitations to the blockchain concept, and understanding those limitations is critical.

While blockchain technology has powerful implications for many industries, its use could be inappropriate and even counterproductive in a number of industries and digital interactions. These limitations are not always readily apparent, and many of them have been learned the hard way – through trial and error.

However, many projects are now working towards blockchain-based infrastructure that is easy to use and customer-facing, without necessarily focusing on the fact that they’re powered by blockchain technology.

This is an essential step towards mass adoption because just as people use the internet in their daily lives without understanding the technology itself, blockchain has the same potential to become ubiquitous behind the scenes in our day-to-day transactions.

The size and distributed nature of the blockchain system are other limitations. Like all distributed systems, blockchains are not totally immune to hackers and other nefarious actors. Instead, these distributed networks are better able to respond to attacks and grow stronger as a result.

In centralized systems, which are the most common way of storing and transacting data at the moment, there are concerns over the formation of ‘data silos.’ Data silos are vast storage centers for potentially sensitive data, which are highly vulnerable to hackers, as they represent a single source to target. Instead, blockchain distributes this data across multiple nodes, vastly decreasing the likelihood of a data breach.

That makes blockchain more resilient against attacks, but the industry as a whole is by no mean immune. In fact, many cryptocurrency exchanges have already fallen victim to hacks, thefts, and denial of service attacks. But these losses of funds occur due to human error or user negligence, rather than a blockchain itself being compromised. As education about fund safety increases and the ease of wallet solutions for storing crypto-assets improves, it’s likely that hacks and crypto theft will fall significantly.

While many early adopters expected the use of Bitcoin and other cryptocurrencies to be virtually free, that has not turned out to be the case.

Bitcoin, in particular, has suffered extremely high fees during periods of above-average network load, making the movement of small amounts of money slow and expensive.

The issue with blockchain technology as it stands is that the capacity of the network is not enough to keep up with demand. This lack of capacity means that network fees have to be increased to reduce demand temporarily.

However, there are still many scenarios where blockchain-based payments are a vastly superior method of settlement compared to sending fiat money. For cross border payments, referred to as ‘international remittance,’ cryptocurrencies can be sent at a fraction of the cost of fiat currencies, and in much shorter times.

Take Stellar Lumens (XLM) for example. Stellar focuses on international remittance, with each transaction costing just 0.00001 XLM on average, and transaction times of minutes – all processed via the blockchain. In traditional cross-border transfers, users’ money would pass through several intermediaries and take days or weeks to settle.

So while Bitcoin may indeed be an expensive way to send and process large transactions, other second and third-generation cryptocurrencies are filling this niche and offering a cheap and easy settlement.

As mentioned above, the speed of blockchain networks could also be a severe limitation. As of 2016, the Bitcoin network was only able to process about seven cryptocurrency transactions per second (TPS), whereas the Ethereum network can handle just 20 – a slow rate by modern standards.

However, there are newer generation blockchains, which are dramatically improving transaction speed. EOS, a blockchain which concluded the most successful ICO of all-time in January 2018, broke 3,000 TPS – becoming one of the fastest blockchains to date.

While the speed of these blockchain networks is improving, for now, network speed remains a serious obstacle to growth and widespread adoption.

Last but not least, there are serious political implications for the use of blockchain technology for nonmonetary transactions.

Some governments have been more welcoming of blockchain technology than others. China, for example, has been widely critical of cryptocurrencies, moving to ban the use and investment of cryptos, and also prohibit crypto exchanges.

A Solution Looking for A Problem?

Because of the promises some companies have made about how their blockchain-based projects will revolutionize the world, while at the same time being slow to deliver even a basic working product, many have criticized the usefulness of blockchain.

This has led some to describe blockchain as ‘a solution looking for a problem.’ It’s true that many companies eager to jump on the blockchain and crypto bandwaggon have come up with blockchain implementations for problems which could be easily, or even more effectively, served by existing technology.

However, this isn’t to say blockchain doesn’t hold huge disruptive potential across a massive range of industries. Instead of focusing on cryptocurrencies and tokens like in the early days of blockchain, many companies are now looking at implementing the underlying technology to areas as diverse as trade finance, gaming, casinos, marketing, and logistics.

Of course, as with any nascent industry, there are hurdles and limitations to overcome – but as a technology, blockchain has the power to be as disruptive as the internet, powering a true internet of value in our daily lives.