Established in 2014 in the Czech Republic, Trezor is one of the most well established and trusted cryptocurrency security companies. Trezor hardware wallets are developed and produced by SatoshiLabs, a company that was founded by cryptocurrency veteran Marek Palatinus and places a strong focus on open-source code.

Each Trezor wallet works on the principle of ‘zero-trust.’ In terms of asset security, Trezor works on the expectation that even secure cryptographic systems might become compromised.

This makes Trezor devices one of the most secure ways to store crypto private keys available. In this article, we take a closer look at the classic Trezor One and find out if it can still compete with the more expensive, upgraded Trezor Model T.

Additionally, you can read our Trezor Model T review for an in-depth look at what this hardware wallet offers.

The Trezor One is a really compact device, fitting easily in the palm of your hand, and features a simple design, with a small screen and two buttons for navigation on the front.
The Trezor One is around the same length as the Ledger Nano X, but it’s larger width allows for a decent sized screen which fits 6 lines of information on – enough to verify a transaction without text rolling off the screen like Ledger’s device.

Note: Check out our Ledger Nano X review to see if it is the right wallet for you. We actually think it beats the competiton.

Trezor One is available in both black and white, here’s a quick look at its specs:

Unboxing the Trezor One

The Trezor One comes in slimline packaging, and one of the first things users will notice is the tamper-evident seals on each end of the box.

Underneath these, there’s a second layer of glue securing the packaging together – this is so users can be sure no one has modified their device before delivery. In the box, users will find their device comes with a USB cable, albeit a very short one, and a small lanyard for the Trezor One. Additionally, Trezor includes logo stickers in the box, alongside instruction manuals, and two sheets for your 24-word recovery seed phrases.

The Trezor ONE has recently upgraded its range of coins and now supports over 1000 crypto assets which is among the highest of any hardware wallet. This brings the Trezor devices on par with their competitors by Ledger, whose wallets also support around 1,000 digital assets.

It’s highly likely that the majority of users will find that their favorite coin is supported on the Trezor One, and likewise, the Trezor One supports all ERC-20 based tokens.


However, there are some notable missing assets from the Trezor One, including Ripple (XRP), Cardano (ADA), Monero (XMR) and Tezos (XTZ).

In July 2020, Trezor integrated BTC Direct, a Netherlands based company which is one of the easiest ways for European customers to buy Bitcoin. Within Trezor wallet’s desktop interface, users can now have access to a ‘Buy Feature’, which offers a large range of supported currencies and lets users easily buy large amounts of Bitcoin through a single verification process.

The best part of the whole process is that Bitcoin is directly stored on your connected Trezor device – including the Trezor One, as soon as you purchase the BTC. This means there’s no hassle of sending BTC from the exchange to your hardware wallet, and there’s also no worries that you’ve sent BTC to the wrong address.

Setting up the Trezor One is simple and straightforward. New users first connect the device to their computer using the USB cable provided and install the Trezor bridge. The Trezor bridge allows communication between your device and computer, and it contains the essential steps for setup.

Once you’ve plugged in your device and launched bridge, these are the next setup steps:

Now, you’re ready to start making transactions with the Trezor One. It’s one of the fastest setups of any hardware wallet, and for advanced users, the option to skip seed phrase confirmation can save a lot of time.

Trezor is well known for the completeness of its security approach, so much so, that it’s completely transparent with any issues identified with its hardware wallets, and discloses the information publicly. In addition to a 24-word seed phrase and PIN access which are standard in most hardware wallet devices, Trezor also integrates other security features into its wallets.

Each Trezor device is a single purpose computer. This means that there are no additional features which could become compromised, and the device is simple and built for one purpose – to protect users funds. This is especially important, as the recent announcement by competitor hardware wallet manufacturer Ledger to integrate Bluetooth connectivity into the new Ledger Nano X has drawn criticism from some who claim it’s a potential vulnerability.

In June 2020, Trezor pushed a firmware update for the Trezor One which corrected a possible Segwit transaction vulnerability, which was a Bitcoin specific problem, not a vulnerability caused by Trezor.

Nevertheless, Trezor wanted to secure their users from this highly improbable scenario and pushed immediate updates for the Trezor One – upgrading it to version 1.9.1.

There was minor controversy surrounding Trezor in May 2020, when the alleged details of customers who had purchased Trezor hardware wallets from Trezor’s online store were leaked and posted for sale on the deep web – however it has since been completely proven that this was an elaborate hoax.

Finally, the Trezor One’s hardware is ultrasonically welded, which sounds like something out of sci-fi, but means it’s virtually impossible to restore un-noticed once it’s been broken open.

Should you buy the Trezor One?

Unboxing – In the box, users get the bare essentials but not much else. The USB 2.0 cable, for example, is extremely short to the point where it’s not particularly functional, and the small lanyard doesn’t hold much utility either.

The Device – The device itself is lightweight, functional, easy to use, and slimline. However, compared the Ledger Nano X or KeepKey wallet, it’s relatively utilitarian and doesn’t offer much in the way of design or luxury.

Coin Support – Coin support has recently been expanded, and the range of supported digital assets on the Trezor One rivals that of the Ledger devices. Most users will find their favorite assets are supported, including all ERC-20 tokens. However, some major market cap coins are missing from the Trezor One, such as Ripple, Cardano, and Monero.

Security – Security is where Trezor has established itself as an industry leader, and the Trezor One is no exception. The Trezor One is a secure place to store crypto assets, and Trezor is constantly updating its firmware to stay on top of new threats.

2020 update – The security of the Trezor wallet has actually come into question now with Kraken identifying a significant flaw in the hardware. This is from their blogpost on the subject:

“Kraken Security Labs has devised a way to extract seeds from both cryptocurrency hardware wallets offered from industry leader Trezor, the Trezor One and Trezor Model T.

The attack requires just 15 minutes of physical access to the device. This is the first time that the detailed steps for a current attack against these devices has been disclosed. ”

If you’re looking for a battle-tested hardware wallet, you’d be pushed to find one with better credentials than the Trezor One. Trezor’s commitment to open source code makes its devices auditable, transparent, and open for constant improvement.

Additionally, Trezor One is now a very affordable hardware wallet. At a fraction of the cost of its newer cousin the Trezor Model T, but with practically the same coin support and virtually equal security hardware, the Trezor One is still a great choice for casual users who just need a device which they use infrequently.

However, given the reason security issues that Kraken have identified, we would recommend you go with a Ledger device instead. Either the Ledger Nano S or Ledger Nano X.

Expert Take
"If you’re looking for a battle-tested hardware wallet, you’d be pushed to find one with better security credentials than the Trezor One. Trezor’s commitment to open source code makes its devices auditable, transparent, and open for constant improvement."
Elliot Hill, Blokt

Pick up a Trezor One 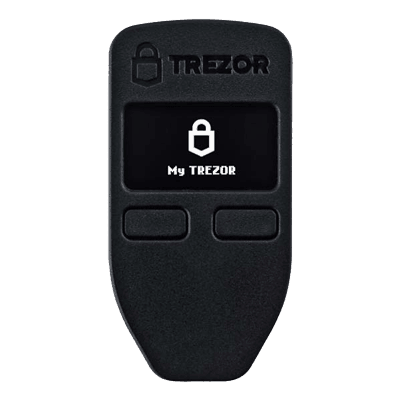